A three-course dinner failed to bring the UK and EU closer together to a Brexit deal – and a bipartisan proposal in Washington also falls short of sealing a fiscal stimulus deal. Both sets of negotiations remain stuck and have weighed on EUR/USD, ahead of a more-European specific event.

New Brexit deadline: After a long dinner and Brussels, European Commission President Ursula von der Leyen and UK Prime Minister Boris Johnson concluded that they are still "far apart." They have instructed their teams to negotiate with a new deadline in sight – Sunday night.

Previous goals have come and gone. For EUR/USD traders, the weekend means that there is a good chance that Brexit would move somewhat out of the radar, as now there is more time to talk. The pound is still set to rock on every headline, but the euro will likely shrug off developments unless a deal is announced on Thursday – highly unlikely.

No white smoke on Capitol Hill: US Treasury Secretary Steven Mnuchin said Democrats and Republicans agreed on 90% of the relief package – but are still at odds over liability clauses and state aid. Contrary to Brexit, there is no deadline and there seems to be more for compromise.

However, Wednesday's deadlock – coupled with a lawsuit against Facebook's alleged monopoly powers – sent stocks down the dollar up. Looking forward, there is room for some upside from bipartisan talks.

After UK and US developments dominated euro/dollar, the focus shifts to the old continent. Christine Lagarde, President of the European Central Bank, is set to deliver on the pledge to add more stimulus via expanding the ECB's bond-buying scheme.

The Frankfurt-based institution is forecast to add some €500 billion to the Pandemic Emergency Purchase Program (PEPP). In coronavirus times, printing more euros means more funds for governments to boost their economies – positive for the common currency. A half-trillion euro boost is mostly priced in and the bank would have to shock markets with a far larger expansion to send the common currency higher.

A surprise may come from comments on the exchange rate. Lagarde may note that the rise of the euro pushes inflation lower and that the ECB is monitoring its value closely. The Frankfurt-based institution does not officially target the exchange rate, but it could hint that its recent rise may trigger a rate cut – that would already shock markets and send the euro down, but the chances remain slim at the moment.

Euro/dollar may receive a boost from the US Food and Drugs Administration, which is set to approve the Pfizer/BioNTech coronavirus vaccine, following Canada's and Britain's footsteps. A shot in the arm could not come sooner – over 3,000 lives were lost to the virus in America on Wednesday, similar to the death toll in 9/11.

Apart from US fiscal stimulus, investors will also be watching America's inflation figures, which are set to edge higher in November, and weekly jobless claims. Applications for unemployment benefits are set to rise after dropping last week.

Overall, a busy day awaits traders, with room to the downside. 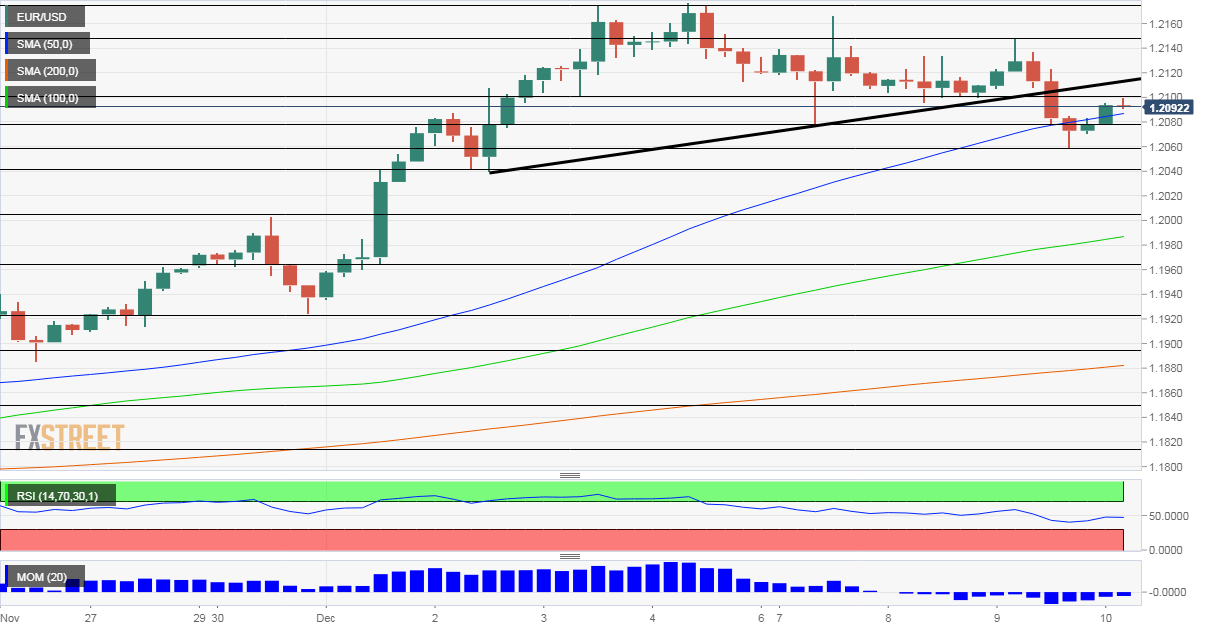 Euro/dollar has slipped below the uptrend support line that had accompanied it since early December. While the currency pair recaptured the 50 Simple Moving Average, it has yet to top the broken trendline. Momentum remains to the downside.

All in all, bears are in the lead.

More Where next for the Fed, fiscal stimulus and Trump

In a letter, the House Financial Services Committee (FSC) asked the Department of Justice (DoJ) for their CBDC assessment. The House Committee analyzed whether the Federal Reserve has the authority to issue a CBDC without authorizing legislation.