The EUR/USD pair kicked off the new week on a positive note, albeit struggled to capitalize on the move and faced rejection near the 1.2100 mark. The US dollar was back in demand amid a modest rebound in the US Treasury bond yields, which, in turn, was seen as a key factor exerting pressure on the major. The US bond market has been reacting to expectations that a massive US fiscal stimulus, along with the impressive pace of COVID-19 vaccinations would lead to a relatively faster US economic recovery and a possible acceleration in inflation.

On the other hand, the shared currency was pressured by the widening gap between US and European bond yields. In fact, the 10-year yield differentials between the US Treasuries and German Bunds reached the highest in a year after the ECB President Christine Lagarde said that the central bank will prevent a premature increase in borrowing costs. This was seen as another factor that contributed to the selling bias surrounding the major. Bulls failed to gain any respite, rather shrugged off an upward revision of the Eurozone PMI prints for February.

From the US, the ISM Manufacturing PMI jumped to a three-year high level of 60.8 in February. This was in line with the narrative of strong sequential economic recovery, which provided an additional boost to the greenback. The pair finally settled in the red and continued losing ground for the third consecutive session on Tuesday. The downward momentum dragged the pair to near one-month lows during the Asian session as market participants now look forward to the flash version of the Eurozone consumer inflation figures for a fresh impetus.

There isn't any major market-moving economic data due for release from the US on Tuesday. Hence, the US bond yields will continue to play a key role in influencing the USD price dynamics. This might further contribute to produce some meaningful trading opportunities around the major.

From a technical perspective, the overnight slide added credence to Friday’s bearish breakthrough an upward sloping channel. Given the recent pullback from near three-year tops, the mentioned channel constituted the formation of a bearish flag chart pattern. The negative outlook is reinforced by the fact that oscillators on the daily chart have just started drifting into the bearish territory. Some follow-through selling below the key 1.2000 psychological mark will reaffirm the bearish bias and drag the pair further towards the 1.1950-45 horizontal support. The corrective fall could further get extended towards the 1.1900 mark en-route the next relevant support near the 1.1860 region.

On the flip side, any meaningful recovery back above the 1.2040 region will now be seen as a selling opportunity. This, in turn, should cap the upside near the trend-channel support breakpoint, now turned resistance near the 1.2100 round-figure mark. That said, a sustained move beyond, leading to a subsequent breakthrough the 1.2125-30 region will negate the bearish outlook and prompt some short-covering move. The pair might then surpass an intermediate resistance near the 1.2175-80 region and aim back to reclaim the 1.2200 round-figure mark. 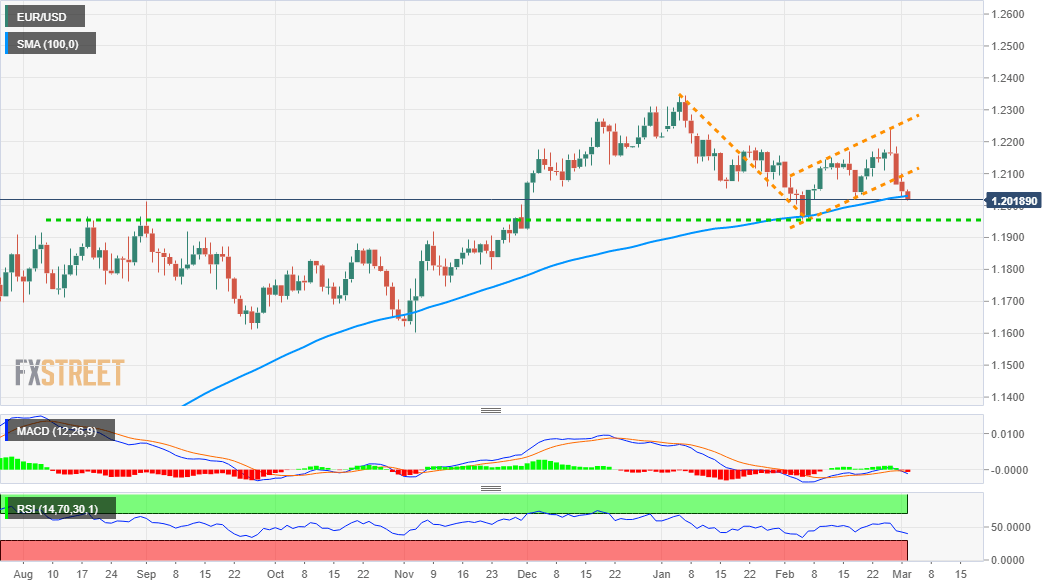