The EUR/USD pair extended the previous session's pullback from closer to 11-week tops and lost some additional ground on Thursday. The US Dollar attracted some haven flows amid deteriorating risk sentiment on the back of fears of a further escalation in trade tensions between the world's two largest economies and exerted some pressure on the major. The shared currency depreciated further after the IMF said that the Euro-zone is facing significant risks due to global trade tensions, a possible no-deal Brexit and debt-laden countries’ failure to reform.

The pair traded well below the 1.1300 handle and remained on the defensive near weekly low through the Asian session on Friday, rather unaffected by the likelihood of a Fed rate cut before the end of this year. The incoming softer US economic data - including last Friday's May monthly jobs report, coupled with slowing inflation raised prospects for at least two rate cuts in 2019. However, the fact that the move is largely priced in, investors seemed inclined to cover their USD bearish positions heading into next week’s FOMC policy meeting.

Ahead of the next big event risk, a slew of Chinese macro data will influence the broader market risk sentiment and provide some short-term impetus. Later during the early North-American session, the US economic docket – highlighting the release of monthly retail sales data, might further contribute towards producing some meaningful trading opportunities on the last trading day of the week.

Looking at the technical picture, the pair continued with its struggle to find acceptance above 100-day SMA and started retreating from 50% Fibonacci retracement level of the 1.1558-1.1107 downfall. A subsequent slide below the 1.1255-50 horizontal zone will point to the resumption of the prior well-established bearish trend and accelerate the slide towards the 1.1200 round figure mark. The latter coincides with 23.6% Fibo. level and should now act as a key pivotal point for the pair's next leg of a directional move.

On the flip side, any meaningful up-move beyond the 1.1300 handle might continue to confront some fresh supply near the 1.1330-35 region (50% Fibo. level), which if cleared decisively might trigger a near-term short-covering rally towards 61.8% Fibo. level, around the 1.1385 level. A follow-through buying has the potential to lift the pair beyond the 1.1400 handle towards challenging March swing highs, around mid-1.1400s. 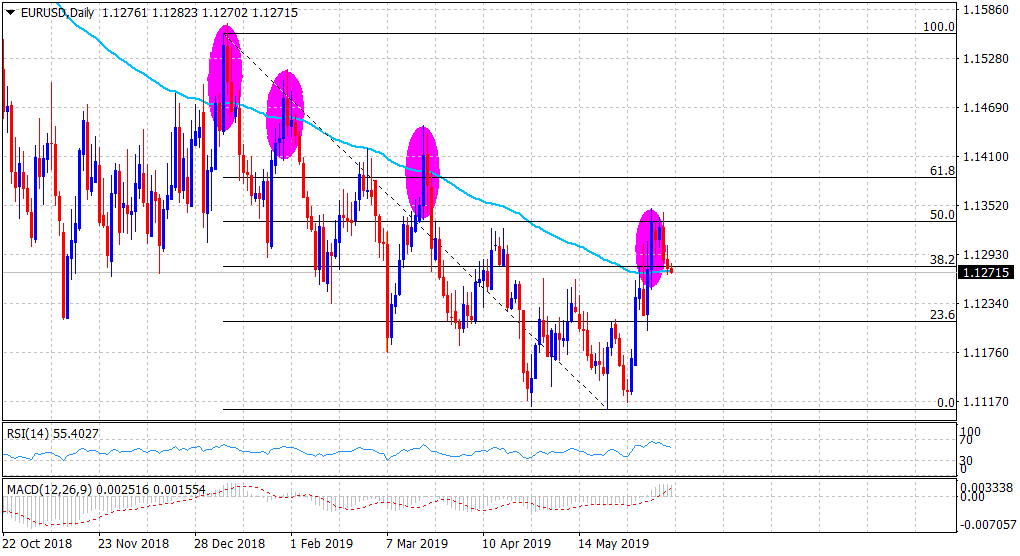