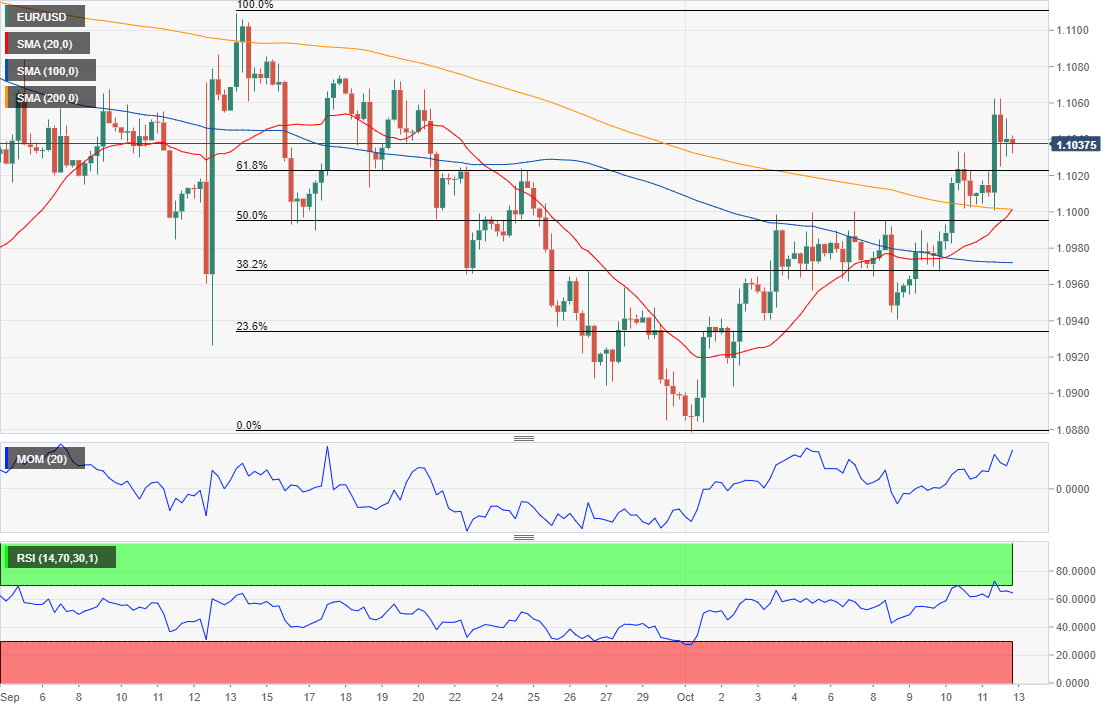 The EUR/USD pair has rallied to 1.1062 on Friday, its highest since September 20, as risk-on prevailed heading into the weekend. Reports on progress in trade talks between the US and China, and headlines indicating that the EU had opened a channel for talks with the UK on Brexit. The greenback recovered just modestly ahead of the close amid profit-taking. The latest rally was triggered by US President Trump, who announced by Twitter that the US had come to “substantial phase one deal with China,” although no details were provided. Furthermore, US Treasury Secretary Mnuchin confirmed that the next round of tariffs’ hike won´t go forward. At the time of writing, optimism about a soon to come resolution to the trade war continued favoring appetite for riskier assets.

In the data front, the US released on Friday the preliminary estimate of the Michigan Consumer Sentiment Index for October, which resulted at 96.0, much better than the 92.0 expected. The US will celebrate Columbus Day this Monday, and most markets will be closed, but not all. There won’t be macroeconomic releases, while the EU will publish earlier in the day August Industrial Production.

The EUR/USD pair is in recovery mode according to the daily chart, as it’s trading above the 23.6% retracement of the 1.1411/1.0878 monthly slump, but will need to extend gains beyond the 38.2% retracement of such slump at 1.1080, to be able to post a more substantial rally. Technical indicators favor additional advances, as they head north within positive levels, while the price extended its rally above a bearish 20 DMA, this last around 1.1000. In the shorter term, and according to the 4 hours chart, the risk is skewed to the upside as the pair is developing above all of its moving averages, with the 20 SMA advancing above the 100 SMA and about to cross above the 200 SMA. Technical indicators have retreated from overbought readings but remain well into positive levels, limiting chances of a steeper decline.