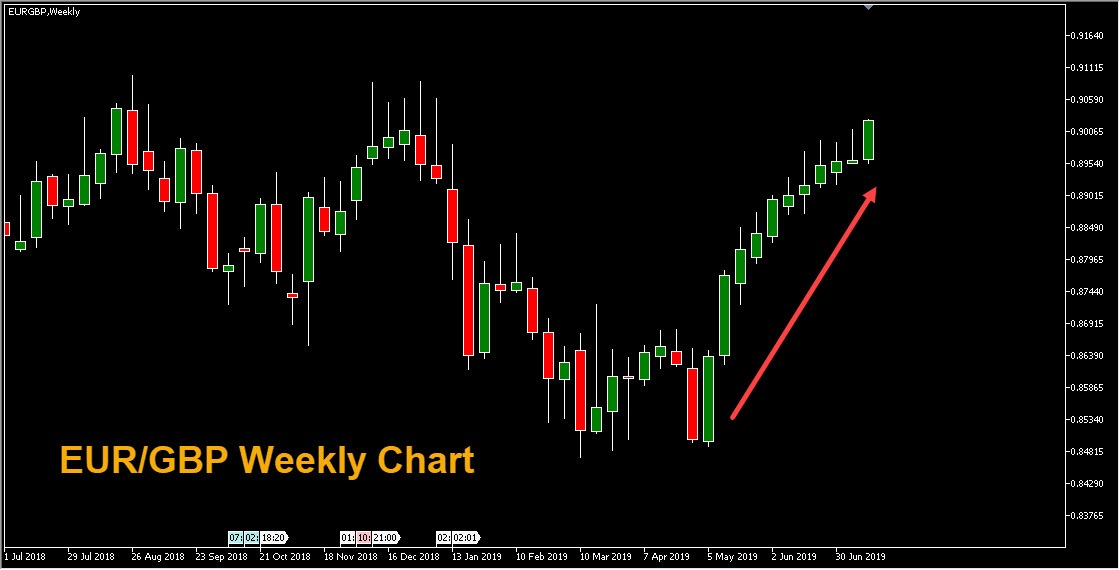 The euro rallied to its highest levels against the British pound since January 11th in Tuesday trading. Looking at the weekly chart above we can see that EUR/GBP has entered an 11th consecutive week of gains.

Worries over a disorderly Brexit were sparked on Monday after the second head-to-head debate between the two leadership candidates competing to replace Theresa May as prime minister.

Both the frontrunner Boris Johnson and his rival Jeremy Hunt declared that they would not be willing to accept the Northern Ireland backstop outlined in Theresa May’s Brexit deal.

In the debate hosted by the Sun and Talk Radio, Johnson was asked whether he would seek a time limit to the Irish backstop.

Johnson replied: “The answer is no. The problem is really fundamental. It needs to come out.”

Meanwhile, Brussels has repeatedly stated that the withdrawal agreement is not up for negotiation and maintain that the backstop is necessary to prevent the return of a hard border between EU-member Ireland and the British province of Northern Ireland.

On Tuesday, data from the UK Office for National Statistics showed that the labor market has continued to be resilient. The UK unemployment rate held steady at 3.8% in the three months to the end of May, a 45-year low. Average weekly earnings, including bonuses, rose by 3.4%, beating expectations of 3.1%

However, no-deal Brexit jitters eclipsed the upbeat labor market data with sterling taking a beating across the board on Tuesday. Both GBP/USD and GBP/JPY have fallen to their lowest levels since the January 3rd ‘flash crash’ and GBP/CAD has plummeted to its lowest levels since September of 2017.