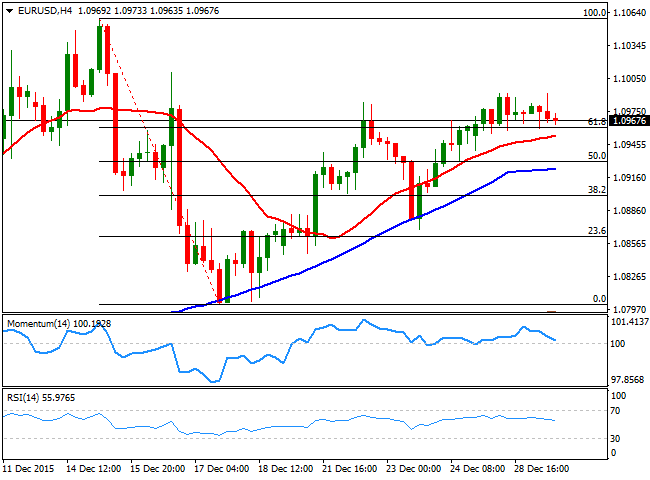 The common currency trades uneventfully against its American rival, with the pair easing from a daily high of 1.0991 amid the positive tone seen in local share markets. Nevertheless, trading remains thin  as year-end´s holidays loom. The US is pending to release its Good's Trade balance for November, and more relevant, the Consumer confidence index for December, expected at 93.8 from a previous monthly reading of 90.4. With the dollar trading slightly higher across the board, a better-than-expected result can give the greenback a temporal boost, but market is expected to remain quiet until next week.

In the meantime, the EUR/USD pair approaches the base of these last days' range at 1.0955, the 61.8% retracement of its latest daily decline, and the 4 hours chart shows that the 20 SMA is losing partially its bullish strength below the mentioned Fibonacci level, whilst the technical indicators head slightly lower above their mid-lines, lacking directional strength. 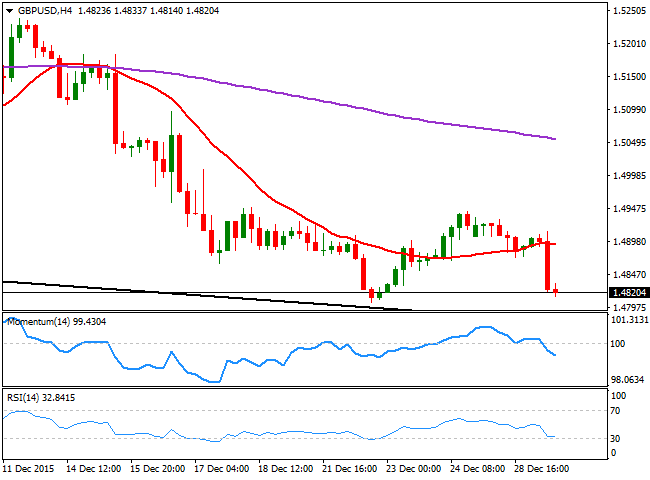 The Pound plummeted down to the 1.4800 region against the greenback, with no certain catalyst beyond the move, except thin trading exacerbating the dominant trend. The pair los around 100 pips from its daily high of 1.4912 reached during the Asian session, and is poised to extend its decline, according to the 4 hours chart, as the technical indicators head south well below their mid-lines whilst the price has extended below its 20 SMA. There should be large stops below the 1.4800 level and if those get triggered, the pair can extend its decline down to the 1.4740 price zone this Tuesday. 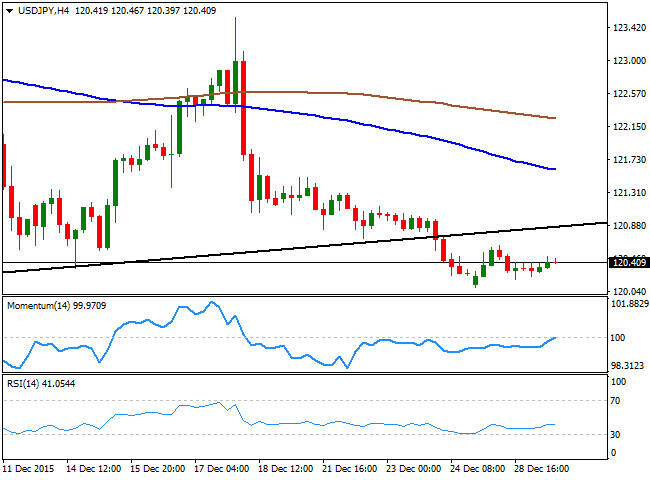 Bearish, but on-hold. The USD/JPY pair shows little progress this Tuesday, trading in a 25 pips range ever since the day started. The Japanese yen refused to move, despite Asian shares closed with gains, led by an advance in Australian stocks. Technically, the pair maintains the negative tone seen on previous updates, as per standing well below the daily ascendant trend line broken last week. The 4 hours chart shows that the moving averages ave accelerated their declines well above the current level, while the technical indicators lack directional strength within bearish negative. Nevertheless, a break below 120.00 is required to confirm some downward continuation, while selling interest is expected to keep surging on advances towards the 120.70 price zone. 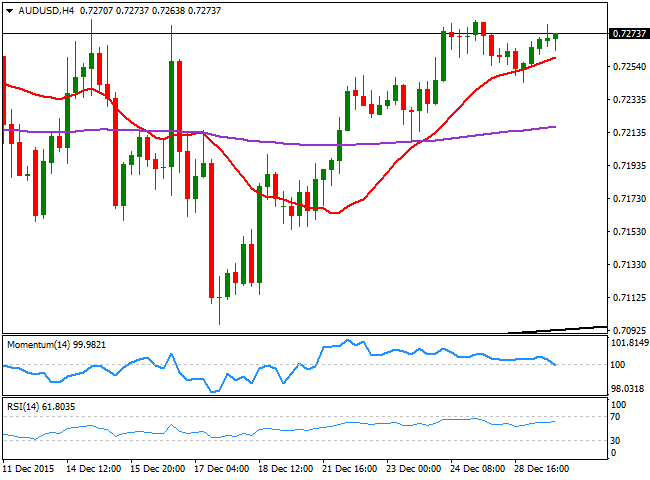 The AUD/USD pair trades slightly higher this Tuesday, having met buying interest on a dip down to 0.7240 late Monday.  The pair presents a short term positive tone, as the 4 hours chart shows that the 20 SMA heads higher below the current level, whilst providing a dynamic intraday support. The technical indicators in the same timeframe however, lack upward strength and the Momentum indicator has even turned lower around its 100 level, diverging from price action. Anyway the upside is favored towards the 0.7330 region, as long as the mentioned 0.7240 level holds.

EUR/USD holds gains near 1.1750 as US election debate kicks-off

EUR/USD holds the recent gains near 1.1750, as the US Presidential election debate kicks-off on a fiery note. The US dollar wallows in multi-day lows amid cautious market mood. The spot printed its biggest single-day gain in over a month on Tuesday.

AUD/USD is off the five-day high but remains well bid above 0.7100, up for the third day in a row. Markets paid little attention to upbeat Chinese official Manufacturing PMI data, as all eyes remain on the first US Presidential election debate.

Gold seesaws near one week high after closely missing the $1,900 mark the previous day. Broad US dollar weakness helps the bullion to cheer the market’s cautious sentiment. with the US election debate underway. Brexit and virus woes weigh on market sentiment.