The EUR/USD pair extended its decline by a handful of pips in this first day of the week, but remained confined to a tight intraday range amid investors being cautious ahead of the big events from this last month of the year. Ever since last week, the market has been pricing in the possibility that the ECB will announce, not only an extension of its QE, but further negative deposit rates in a desperate move to boost local growth. Also, the US will release this Friday its November employment data, which can confirm the case for a US rate hike this December. As for the data released this Monday, German Retail sales declined by 0.4% compared to the previous month, but rose by 2.1% compared to a year before. Inflation in the country rose by 0.1% in  November, in line with expectations, and with the deflationary levels of the region. In the US, Pending Home sales were marginally higher in October, rising by 0.2%, although much less than expected, while the Chicago PMI for November fell to 48.7 from a previous 56.2.

The technical picture shows little progress from previous updates, as in the 4 hours chart, the price remains below a bearish 20 SMA, whilst the technical indicators remain below their mid-lines, although lacking clear strength at the time being. The pair stands at its lowest for the past 7-months, and market's sentiment is clearly bearish. A break below 1.0550 should favor some additional declines for this Tuesday,  yet movement may remain limited intraday ahead of the big events to take place by the end of the week. 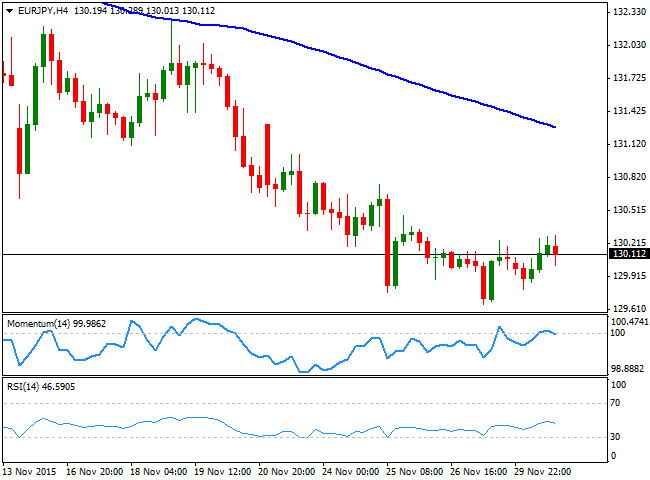 The EUR/JPY pair trades flat for a second day in-a-row, hovering around the 130.00 level, ever since the week started. The pair, however, has set a higher low and a higher high daily basis, which suggest a possible interim bottom under way, particularly if the price manages to recover above 131.00 during the next 24 hours. Short term, the 1 hour chart shows that the price is currently struggling to recover above a bearish 100 SMA,  but that the technical indicators are heading higher above their mid-lines, keeping the downside limited. In the 4 hours chart, however, the technical outlook is neutral-to-bearish, given that the price is well below a bearish 100 SMA, currently around 131.10, while the technical indicators have turned lower around their mid-lines, showing no actual strength at the time being. A break below 129.65, should deny the possibility of an upward recovery and favor further declines, with 128.80 as the next bearish target. 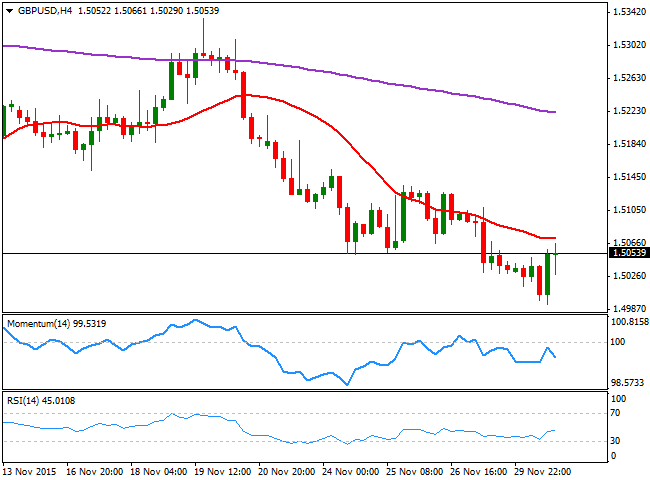 The Pound managed to bounce after testing the 1.5000 region against the greenback, with the pair having been as low as 1.4992 during the European morning. The bounce can be attributed to technical buying interest around the critical psychological figure rather than because of some sudden strength in the British currency. News were light in the UK, with the only release being some credit figures for October, showing that  consumer credit decreased to £1.178B against previous £1.261B, while less mortgages than-expected were approved in the same month down to 69.63K against 68.87K previous. The GBP/USD recovered some 60 pips from the level, and the 4 hours chart shows that the recovery stalled below the 20 SMA that anyway has partially lost its bearish strength. In the same chart, the Momentum indicator has been rejected from its 100 level, while the RSI has recovered from oversold levels, but lost upward strength around 46, all of which maintains the risk towards the downside. 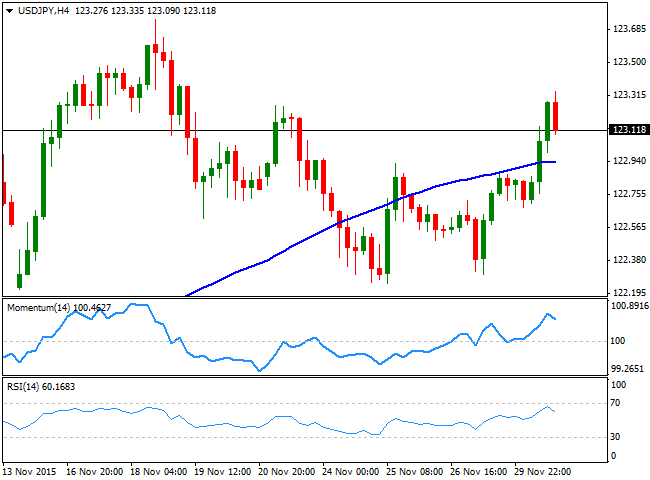 The USD/JPY pair surged to 123.33 this Monday, and managed to close the day with gains above the 123.00 level, helped by broad dollar's demand, despite tepid US data. The pair surged at the beginning of the European session, but held within its early November range. During the upcoming Asian session, Japan will release  its November Manufacturing PMI figures while BOJ's governor Kuroda will offer a speech. Both will be closely followed as investors will be looking for any tip of a chance in the ongoing economic policy. From a technical point of view, the 1 hour chart shows that  the price has recovered above its 100 and 200 SMAs, although the shorter stands below the largest, limiting chances of a more sustainable rally. In the same chart, the technical indicators are turning lower near overbought readings, also limiting advances. In the 4 hours chart, the technical indicators turned lower above their mid-lines, indicating some short term upward exhaustion at the time being. At this point, the pair needs to firm up above the 123.40 level to be able to extend its rally during the upcoming sessions. 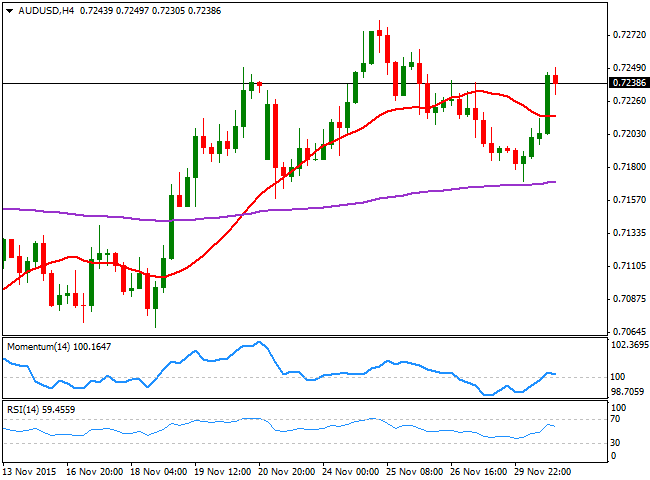 The  AUD/USD pair bottomed around 0.7169 at the beginning of the day, having been on a steady recovery for most of the day, and accelerating its recovery during the American afternoon, following a sharp intraday advance in gold prices. The latest Aussie strength will have to  deal now with the RBA economic policy decision, and Glen Stevens words, during the upcoming Asian session, which should favor further the antipodean currency in the case of a dovish stance. In the meantime, the pair is fining some selling interest around a key static resistance level, the 0.7240 price zone. Technically, the 1 hour chart shows that the technical indicators have eased partially from overbought levels, but that the price remains well above a now bullish 20 SMA. In the 4 hours chart, the price is above a horizontal 20 SMA while the technical indicator have lost their upward strength after recovering above their mid-lines, suggesting further advances are required to confirm a more constructive outlook.