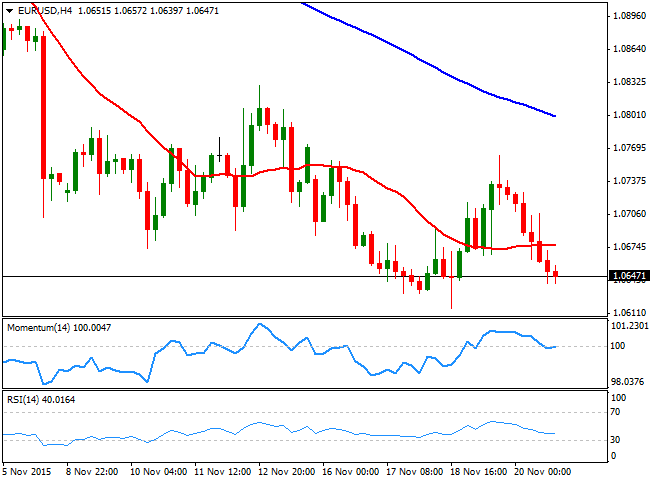 The EUR/USD pair close the week near the 7-month low set at 1.0616, last Wednesday, maintaining the bearish trend established last October.  After the upward corrective movement from past Thursday, the pair resumed its decline by the end of the week, helped by ECB's President Mario Draghi, who repeated the December´s QE extension rhetoric, in a speech before the European Banking Congress, in Frankfurt. At the same time, FED officers continued to hint a possible rate hike in December, keeping the greenback strong, particularly against its European rivals.

The pair has shown little intraday volatility during the last two weeks, but that has resulted in a correction of the extreme oversold conditions reached lately, rather than signal downward exhaustion. Technically, the daily chart shows that that the price remains well below a sharply bearish 20 SMA, whilst the Momentum indicator has turned flat well below its 100 level after correcting oversold readings, whilst the RSI indicator is resuming its decline around 32. In the 4 hours chart, the pair presents a neutral-to-bearish stance, given that the price has been hovering back and forth around a horizontal 20 SMA, while the technical indicators present tepid bearish slopes around their mid-lines. 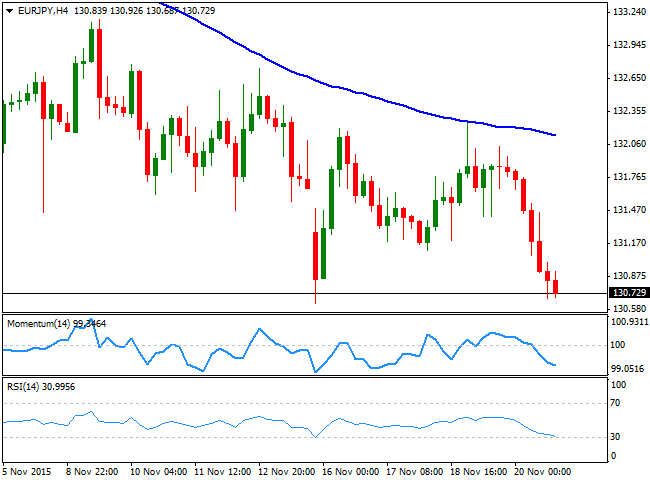 The EUR/JPY pair closed the week below the 131.00 level, and handful of pips above the multi-month low posted at 130.63 earlier last week. While the EUR is being weakened by continued jawboning by ECB officers on further easing the BOJ has decided to maintain the status quo, despite continued speculation of further easing in Japan, as inflation remains well below the central bank´s target.  Anyway, the Japanese yen strengthened in a combination of a steady BOJ and soft US data, leaving the EUR/JPY in the path of a bearish continuation, as the daily chart shows that the price has fallen further below its moving averages, whilst the technical indicators have resumed their downward movements below their mid-lines. In the 4 hours chart, the technical indicators head sharply lower below their mid-lines, whilst an early advance during the week met selling interest around the 100 SMA, currently at 132.20. 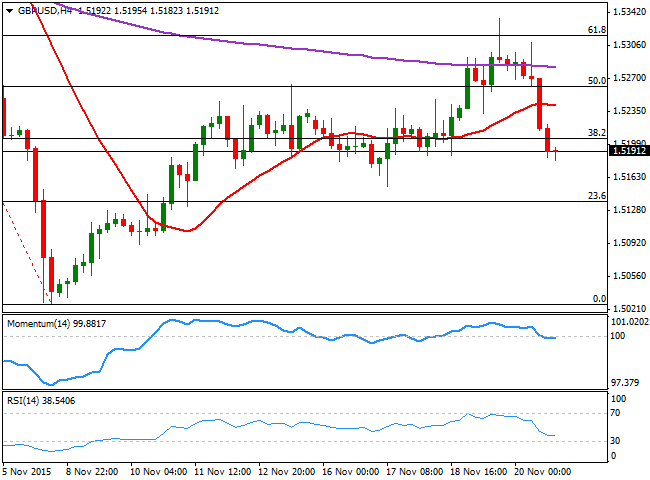 The GBP/USD pair advanced steadily over these last few days, reaching a fresh 2-week high of  1.5334, but plummeted on Friday to close the week in the red, with no clear catalyst behind the decline beyond dollar's strength. The Pound received some attention after BOE's member Broadbent said that the Central Bank´s inflation forecast is not as relevant as the economic behavior when it comes to determinate when to rise rates, mid last week, but investors enthusiasm faded on poor retail sales data. The technical picture suggests a major correction has been completed, as the price retraced from the 61.8% retracement of the November decline. In the daily chart, the price  is well below a bearish 20 SMA, whilst the technical indicators head south below their mid-lines, maintaining the risk towards the downside. In the 4 hours chart, the Momentum indicator is flat right below its 100 level, while the RSI indicator holds around 38, whilst the price stands well below its moving averages, also indicating additional declines particularly on a break below 1.5160. 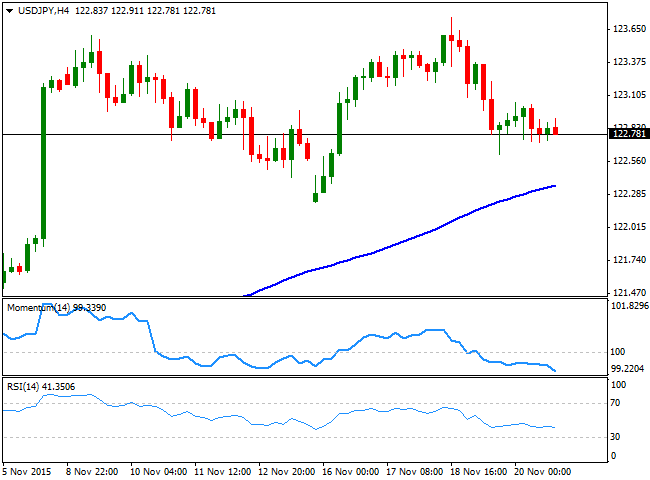 The USD/JPY pair erased most of its weekly gains and closed last Friday at 122.78, with the Japanese yen advancing after the Bank of Japan decided to maintain its current pace of monetary stimulus unchanged in its monthly meeting. Also, Sayuri Shirai, a member of the BOJ policy Board, said last Friday that financial stability is not a major concern now, but that the bank is watching it closely, whilst reiterating that the quantitative easing will remain as long as necessary to meet the 2.0% inflation goal. The daily chart for the USD/JPY pair shows that the price remains above its 100 and 200 SMAs, both together around 121.40 whilst the technical indicators continue retreating from overbought levels, heading towards their mid-lines. Shorter term, the 4 hours chart shows that the Momentum indicator has accelerated strongly below the 100 level, while the RSI indicator heads south around 41 supporting a continued decline on a break below 122.60, November 19th low and the immediate support. 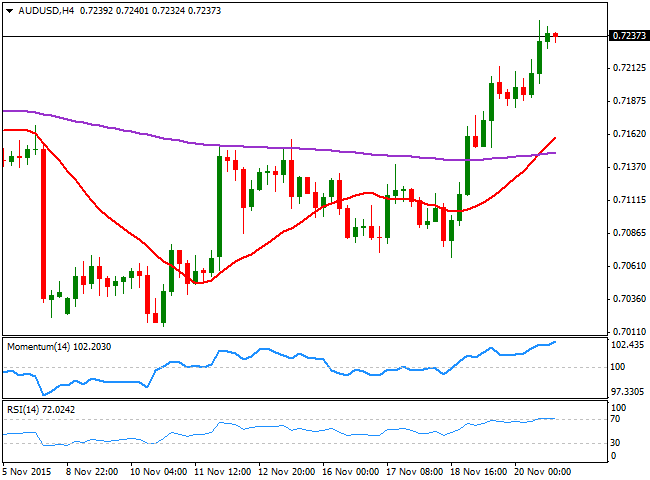 The Australian dollar surged to a 3-week high of 0.7249 against its American rival, and closed the week a few pips below such high, standing among the best weekly performers. The Aussie got a boost last Friday, after the PBOC announced a rate cut for its Standing Lending Facility (SLF) for local financial institutions across several maturities, in another attempt to support local economic growth. The AUD/USD daily chart shows that the price has advanced well above a bullish 20 SMA, whilst closing above its 100 DMA, for the first time in almost three months, and that that the technical indicators maintain their bullish slopes well above their mid-lines, all of which supports further advances. In the 4 hours chart, the Momentum indicator maintains its upward slope, despite being in extreme overbought territory, whilst the RSI has lost its upward strength, but holds around 72, supporting some consolidation ahead the next directional move.

EUR/USD pressured below 1.0950 after ADP beats

EUR/USD has is trading below 1.0950, under pressure. ADP's private-sector jobs report has shown a loss of only 27,000 jobs, far better than expected. The ISM Manufacturing PMI is next.

GBP/USD pressured under 1.24 amid a gloomy mood

GBP/USD is trading below 1.24, down on the day. The market mood is gloomy as coronavirus continues spreading. The UK's death toll jumped by 27% and global infections topped 850,000. The final UK Manufacturing PMI beat expectations with 47.8.

Gold reversed an early dip to over one-week lows and turned higher for the day. The safe-haven precious metal benefitted from the global risk-aversion trade. Resurgent USD demand might turn out to be a key factor that might cap gains.

WTI: Bears eyeing $19 mark amid oversupply concerns, ahead of EIA

Having faced rejection once again near 20.80 region, WTI (oil futures on NYMEX) resumes its recent bearish trend, as the bears now look to test the 17-year low of 19.27 reached earlier this week.