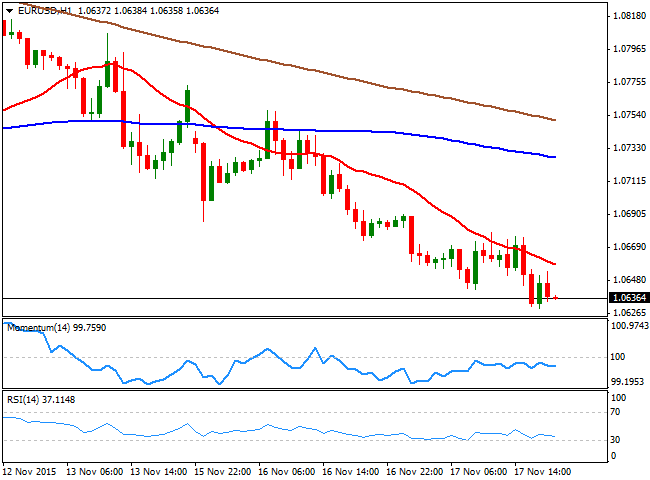 The common currency extended its decline versus its American rival to a fresh 7-month low of 1.0630 this Tuesday, as a return of risk appetite and better-than-expected US inflation data sent the USD higher particularly against safe havens and funding currencies such as the EUR. The German ZEW survey for November, released at the beginning of the day, showed that economic sentiment continued to decrease in the EU, down to 28.3 from a previous 30.1 and expectations of 32.5. German current situation is also seen worse than previously estimated albeit economic sentiment has improved from 1.9 to 10.4. Nevertheless, a tepid improve in US inflation data for October, weighed more in the market, as the CPI rose 0.2% compared to a year before, against previous 0.0%.
The EUR/USD pair ends the day a few pips above the mentioned low, maintaining the dominant bearish tone, despite the limited intraday volatility seen in the pair during these past couple of weeks, with investors still considering a possible retest of the year low at 1.0461. Short term, the 1 hour chart shows that the 20 SMA presents a strong bearish slope, and that advances towards it attracted selling interest. In the same chart, the technical indicators hold below their mid-lines, lacking directional strength at the time being. In the 4 hours chart, the price extended further below a mild bearish 20 SMA, while the RSI indicator heads strongly lower near oversold territory, and the Momentum indicator aims higher below the 100 level,  rather reflecting the latest bounce than suggesting further gains. 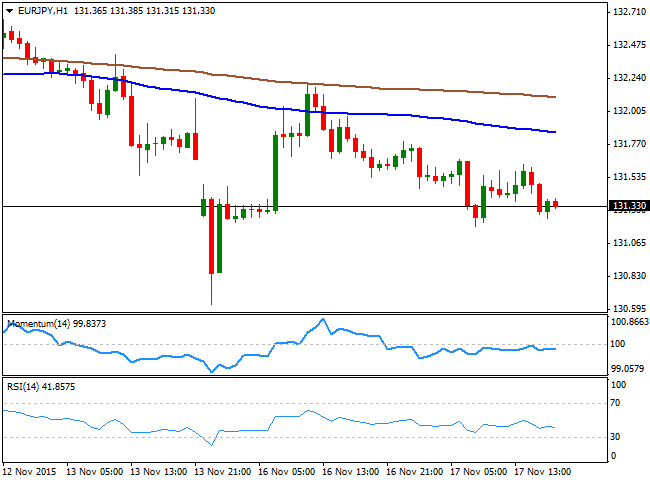 The EUR/JPY pair resumed its decline after its Monday's upward corrective move, and fell down to 131.19, ending the day a handful of pips above it. The Bank of Japan will have an economic policy meeting next Thursday, and investors are once again speculating on whether the Central Bank will extend its stimulus program, but chances seem quite limited after the latest officers' statements. Technically, the EUR/JPY pair 1 hour chart shows that the price retreated further below its 100 and 200 SMAs which are gaining bearish slope, while the technical indicators head slightly lower below their mid-lines, in line with further declines for this Tuesday. In the 4 hours chart, the price remains below a CLEARLY bearish 100 SMA, while the technical indicators remain below their mid-lines, with the RSI indicator accelerating lower around 41, in line with the shorter term view. 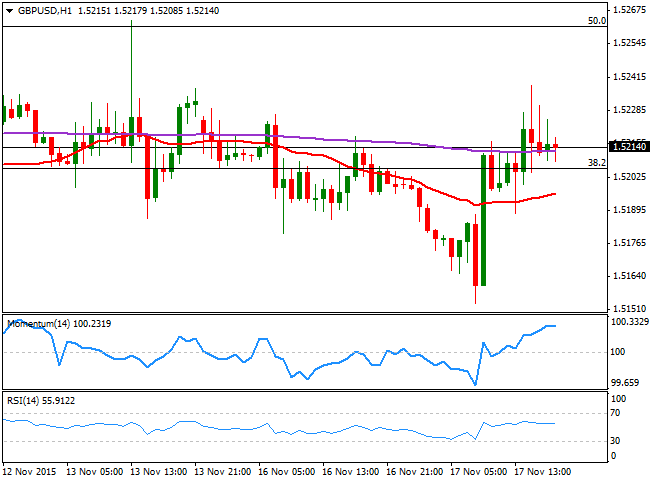 The GBP/USD pair ended the day with some limited gains  a few pips above the 1.5200 level, having set a lower low weekly basis at 1.5153 at the beginning of the European session, on the back of dollar's strength. Both economies released their October inflation data, with the UK reporting that the consumer price index fell by 0.1% year on year, and rose 0.1% from September, in line with market's expectations. Core inflation in the United Kingdom posted an annual rise of 1.1%,  helping the Pound in bouncing from the mentioned low, albeit the numbers were not enough to restore investor's confidence after the latest BOE's economic policy announcement. Technically, the 1 hour chart shows that the neutral stance prevails, given that the price is moving back and forth around a horizontal 20 SMA and the 38.2% retracement of its latest weekly decline, whilst the technical indicators have turned back lower after a tepid advance in positive territory. In the 4 hours chart, the technical indicators remain stuck around their mid-lines, whilst the 20 SMA is also horizontal around the mentioned Fibonacci level, failing to offer a clear directional picture for the upcoming sessions. 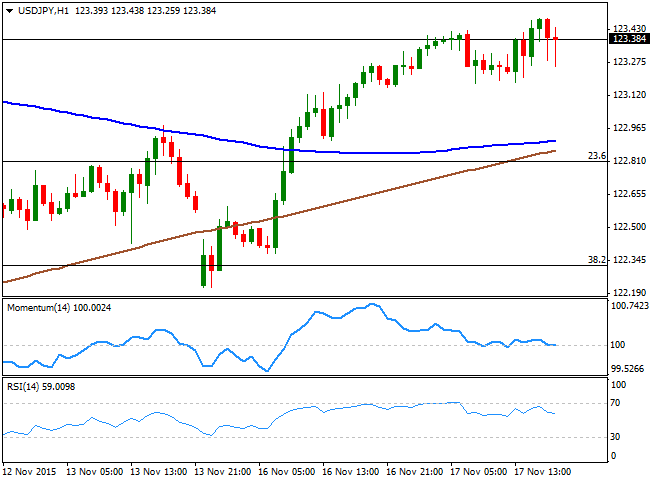 The USD/JPY pair posted a soft advance this Tuesday, extending its weekly rally up to 123.48 in the American afternoon, following the positive mood among  stocks traders. The pair, however, made little technical progress, still contained below the post-NFP high of 123.59, the level  to break to confirm a more constructive outlook. Short term, the 1 hour chart shows that the 100 and 200 SMAs, head slightly higher and in a tight range around 122.80/123.00, reflecting a limited upward momentum at the time being. In the same chart, the technical indicators have turned lower, lacking directional strength, but holding above their mid-lines. In the 4 hours chart, the price holds near its daily high, whilst the technical indicators have lost their upward strength near overbought territory, still far from indicating a bearish movement for the upcoming sessions. 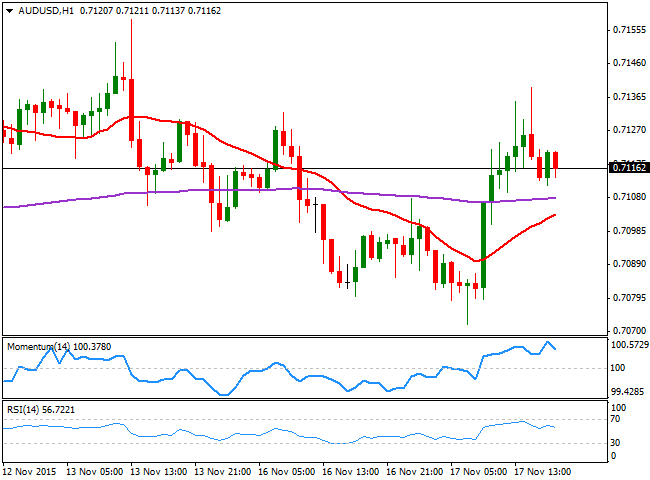 The Australian dollar fell down to 0.7071 against its American counterpart,   but trimmed losses during the European morning, following a strong recovery in copper prices that rebounded from a fresh multi-year low posted earlier this week. Despite gold prices plummeted to fresh lows later in the day, and most precious metal followed, the AUD/USD pair managed to end the day with some gains above the 0.7100 level, still far from confirming a more sustainable rally ahead. From a technical point of view, the 1 hour chart shows that the indicators are heading slightly higher above their mid-lines, whist the price stands above a bullish 20 SMA, all of which should keep the downside limited. In the 4 hours chart, however, the early advance was rejected by the 200 EMA still offering a strong dynamic resistance around 0.7150, whilst the price is hovering around a flat 20 SMA and the technical indicators lack clear directional strength around their mid-lines.