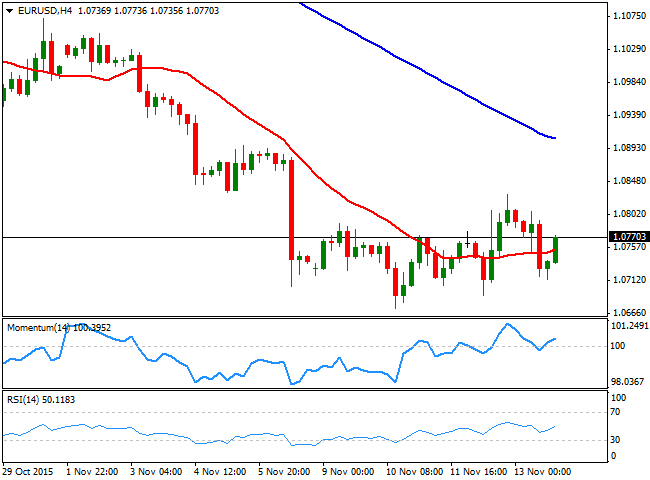 The EUR/USD pair closed last week with a 30 pips gain, having traded in a very limited range these last days, as the dominant bearish trend, due to the widening imbalances between Central Banks, remains firm in place. Even more, the fact that US data released last Friday was far from encouraging, and even so, the greenback refused to ease, suggests fresh lows are likely for this week. US Retail Sales and the wholesale inflation came out below expected, triggering a short-lived slide in the American currency. Nevertheless, in Europe, things weren't better, as German and the EU GDP figures showed  limited growth in the region during the third quarter.

Technically, and according to the daily chart, the pair has barely corrected the extreme oversold readings reached after the release of US employment data a week ago. In the same chart, the Momentum indicator aims higher, but remains below its mid-line, whilst the 20 SMA has extended its decline below the 100 and 200 SMAs, and remains far above the current level, all of which supports the ongoing bearish trend. In the 4 hours chart, the price has been moving back and forth around a horizontal 20 SMA, whilst the technical indicators head slightly higher around their mid-lines, lacking upward strength. Selling interest has contained advances in the 1.0800/10 price zone, yet even some follow though beyond the level won't affect the trend, as only a recovery above 1.1000 will mark and interim bottom under way. 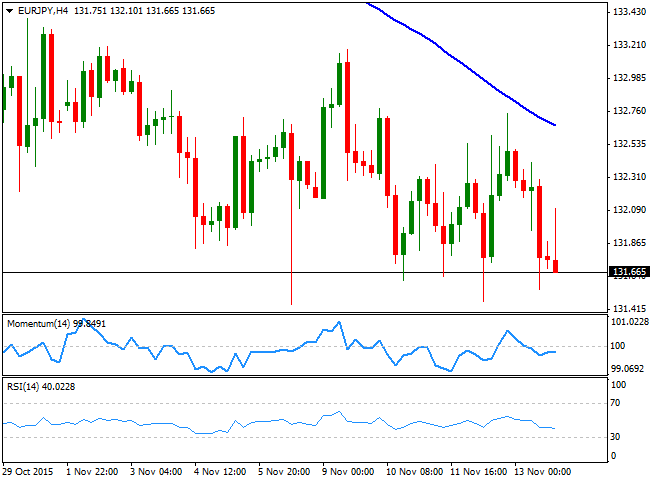 The EUR/JPY pair closed last Friday a few pips above the multi-month low set at 121.44 early November,  at 131.66. The Japanese yen posted modest advances against all of it major rivals last week, as BOJ board member Yutaka Harada, suggested there's no imminent need for additional easing, despite inflation is still far from the Central Bank´s target. Daily basis, the technical picture favors the downside, given that the price is far below its 100 and 200 SMAs, whilst the Momentum indicators is unable to advance beyond its 100 level and the RSI indicator turned lower around 35. In the 4 hours chart, the pair has met selling interest on approaches to a strongly bearish 100 SMA, currently at 132.60, whilst the technical indicators stand below their mid-lines, albeit lacking direction strength at the time being. 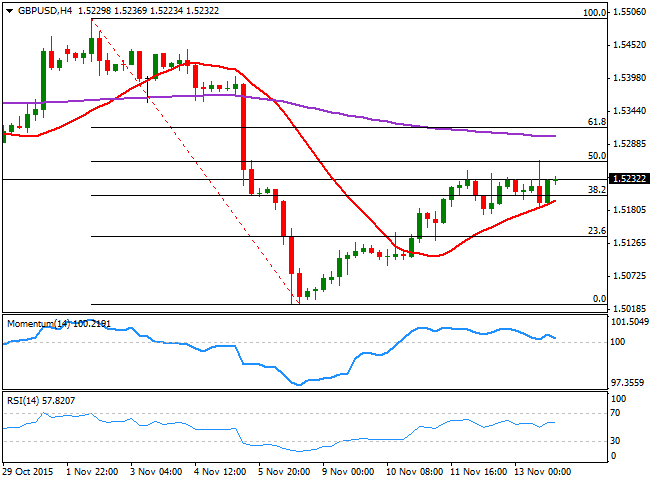 The GBP/USD pair managed to recover some ground this past week, having advanced up to 1.5263, the 50% retracement of its latest daily fall. The pair run into the level following the release of weaker-than-expected macroeconomic data in the US, and found buyers on a pullback below the 1.5200 level. The Pound has recovered part of its charm, after taking a hit from the latest BOE's economic policy meeting, in which the Central Bank downgraded its growth and inflation forecasts, diminishing chances of a rate hike for the first half of 2016 in the UK. Nevertheless, the GBP is still among the strongest currencies across the board, and the first to gain on dollar's weakness. Technically, the daily chart shows that the technical indicators have extended their recoveries from oversold levels, but also that the upward momentum faded before they cross towards positive territory. In the same chart, the 20 SMA maintains a strong bearish slope a few pips above the mentioned high, all of which limits chances of a stronger rally at the time being. Shorter term, the 4 hours chart shows that the price is above a firmly bullish 20 SMA, but that the technical indicators lack upward strength and are barely holding above their mid-lines. The 61.8% retracement of the November's decline stands at 1.5315, and it will take a break above it to confirm  a continued upward move during the upcoming days. 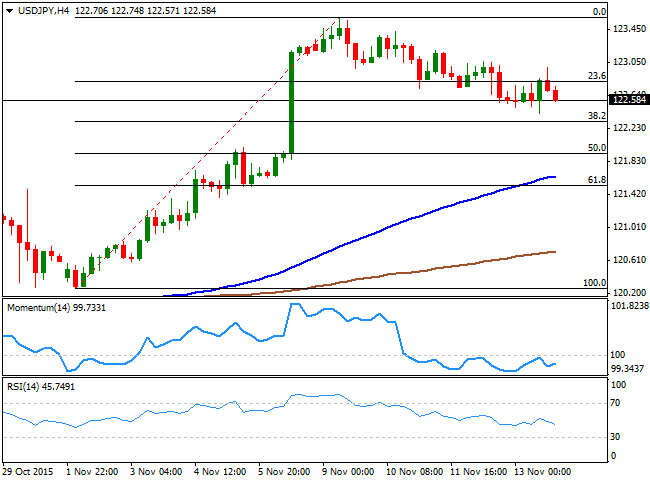 The USD/JPY pair closed last Friday at 122.58, having retraced half of the gains achieved in the NFP Friday, on speculation the Bank of Japan may refrain from extending the monetary stimulus program, at least for the rest of the current fiscal year. Also, soft US macroeconomic data has prevented the greenback from running these last few days, although  the confirmation of a technical top remains for now, out of the question. Technically, the daily chart for the USD/JPY shows that the price is now below the 23.6% retracement of its latest advance, whilst the technical indicators have retraced from overbought level and hold far above their mid-lines, implying limited bearish potential at the time being. In the same chart, the 100 and 200 SMA's converge with the 61.8% retracement of the same rally at 121.50, becoming a critical support during the upcoming days. In the 4 hours chart, the technical indicators diverge from each other in negative territory, but the price remains well above its moving averages. The 38.2% retracement of the mentioned rally stands at 122.30 the immediate support and the level to break to confirm further declines for this Monday. 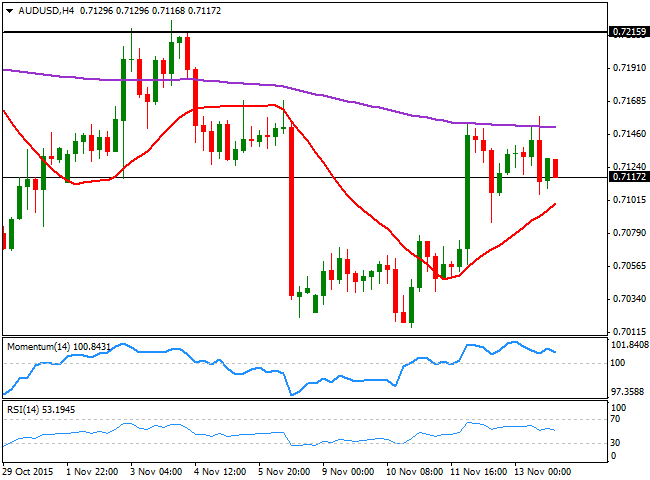 The AUD/USD pair reversed course last week, closing with gains after falling for four weeks in-a-row. The Australian dollar got a nice boost from a shockingly positive local employment report, which showed that the country added over 58K new jobs last October. Investors took some profits out of the table on Friday, but the pair held to most of its weekly gains and closed above the 0.7100 level. The daily chart shows that an upward continuation can't yet be confirmed, given that the price retreated at least twice from a bearish 20 SMA, whilst the Momentum indicator holds around its 100 level, and the RSI turns south around 48. In the 4 hours chart, the price has failed to advance beyond the 200 EMA, currently at 0.7150 and the immediate resistance, but remains above a bullish 20 SMA, whilst the technical indicators turned south in positive territory. A candle opening above the mentioned level should favor further gains for the upcoming sessions, with 0.7240 as the next strong static resistance level to watch.

Financial markets kick-started the week with an upbeat mood amid hopes there’s light at the end of the pandemic tunnel. Nevertheless, the dollar is still King.

GBP/USD under pressure amid concerns about UK PM´s health

The GBP/USD pair is under pressure trading below the 1.2300 level as news that PM Boris Johnson has been hospitalized due to “persistent symptoms,” according to his spokesman. Rumors mounting Johnson is in worse shape than reported.

Gold is trading in three-week’s highs while above its main DMA (daily simple moving average) suggesting that bulls remain in control of the market.

WTI advance limited near $28.00 per barrel

WTI is consolidating the advanced it made in the last three sessions as the market is digesting the Trump tweet suggesting that a Saudi-Russian deal has been made.