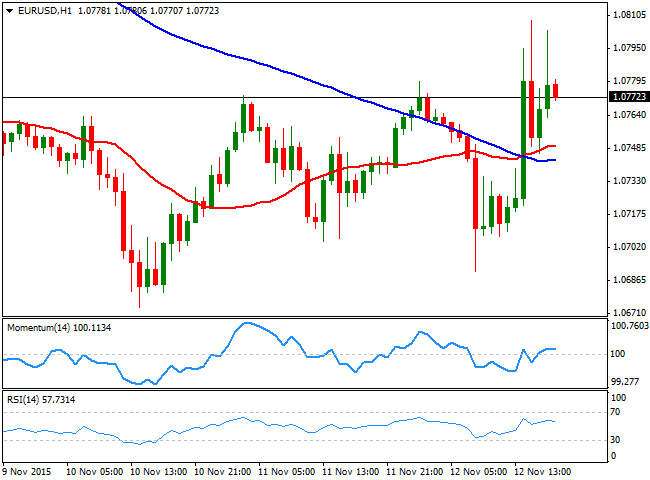 Central Banks' heads led the way for the EUR/USD pair this Thursday that anyway traded within its latest range. The common currency fell down to 1.0690 against its American counterpart in the European morning, following some comments from the ECB president, Mario Draghi, who pretty much guarantee an extension of QE next December, in his testimony on monetary policy, before the European Parliament. The greenback advanced across the board, until the US session opening, when plummeting stocks and a mute Yellen, who made no comments on economic policy, sent the pair to a fresh weekly high of 1.0808.

The pair settled below the figure ahead of the close, showing little signs of having bottomed. In fact, the fundamental background that triggered the latest decline that is, the increasing imbalance between Central Banks, remains the same, which means that the risk is still towards the downside. The 1 hour chart shows that  the price has managed to advance above its 20 and 100 SMAs, both around 1.0740/50, but that the technical indicators have lost their upward strength after crossing their mid-lines towards the upside. In the 4 hours chart, the price is still moving back and forth around a horizontal 20 SMA, while the technical indicators head higher above their mid-lines, mostly preventing the pair from falling in the short term, rather than signaling a continued advance. 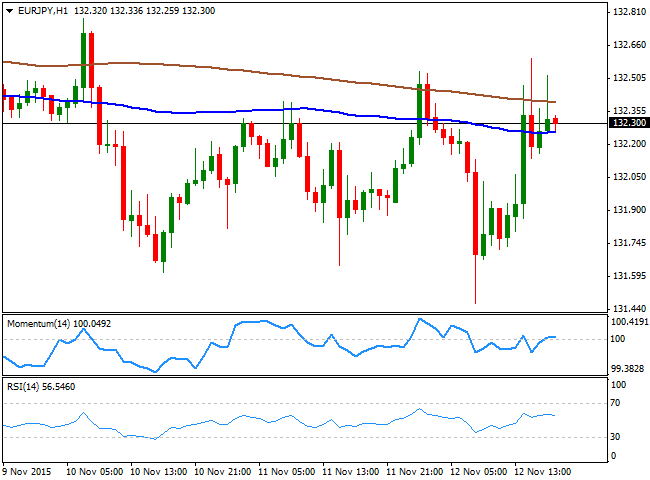 The EUR/JPY pair aims to close the day with some limited gains, having however, traded in its wider daily range for the week. Draghi's comments dragged the EUR lower in the London session, with the EUR/JPY down to 131.47, a fresh weekly low, from where it bounced up to 132.59. Choppy intraday trading did nothing to modify the ongoing neutral bias in the pair, as the 1 hour chart shows that the technical indicators have turned horizontal around their mid-lines, whilst the early advances beyond the 200 SMA were quickly reverted, and the price is now hovering around its 100 SMA. In the 4 hours chart, the technical indicators have advanced up to their mid-lines, where the recoveries stalled, while the price remains well below  a sharply bearish 100 SMA,  currently around 132.90, all of which continues to favor a bearish continuation for this last day of the week. 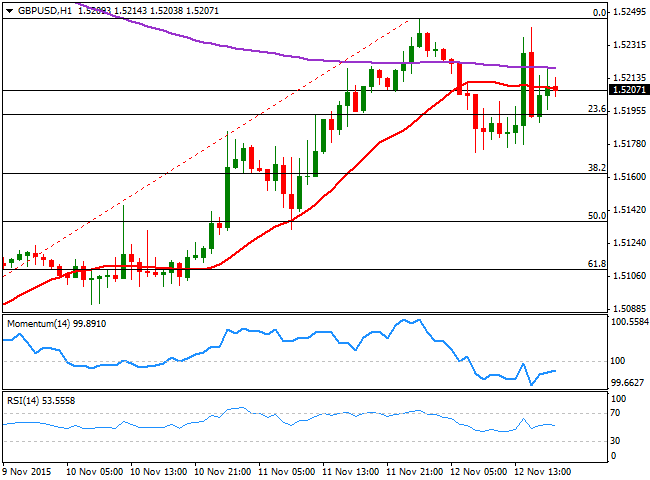 The GBP/USD pair advanced up to 1.5248 at the beginning of the day, favored by a broadly weaker dollar across the board. The pair however, retreated from that fresh weekly high in the European morning, driven by demand of the American currency after dovish ECB's president comments, falling down to 1.5173 ahead of the US opening. With no macroeconomic news coming from the UK, the pair traded purely on market's  sentiment,  towards the greenback, recovering back ahead of the 1.5200 level by the end of the day. Technically, the 1 hour chart shows that the price is hovering around a horizontal 20 SMA, whilst the technical indicators have turned flat around their mid-lines, lacking certain directional strength at the time being. In the 4 hours chart, the 20 SMA maintains a strong upward slope below the current price, whilst the technical indicators are resuming their advances well above their mid-lines, all of which increases chances of a bullish breakout for this Friday. 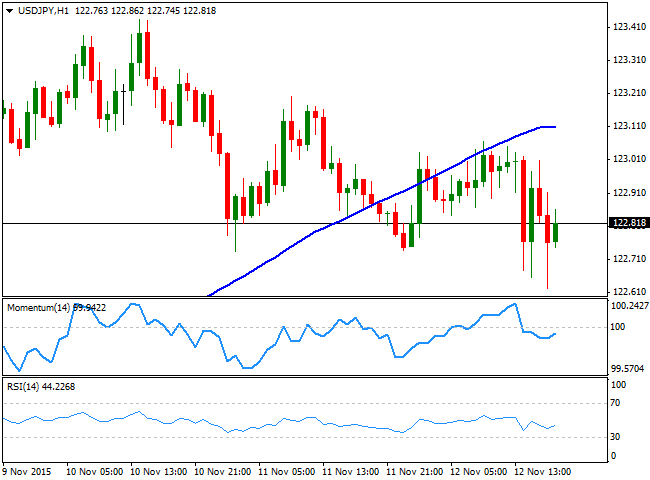 Despite trading in a tight range ever since the week started, a slightly negative trend is starting to emerge in the USD/JPY pair, which extended its decline down to 122.62 this Thursday. The Japanese yen has posted a discrete advance considering the sharp decline in worldwide stocks, but may play catch up after the upcoming Nikkei's opening. Technically, the 1 hour chart shows that the pair is slowly extending its decline below its 100 SMA for the first time since late October, whilst the technical indicators present tepid bearish slopes below their mid-lines, lacking momentum enough to confirm an imminent break lower. In the 4 hours chart, the price is consolidating near its low, but far above its moving averages, while the technical indicators head south below their mid-lines, supporting a  bearish bias for this last day of the week. 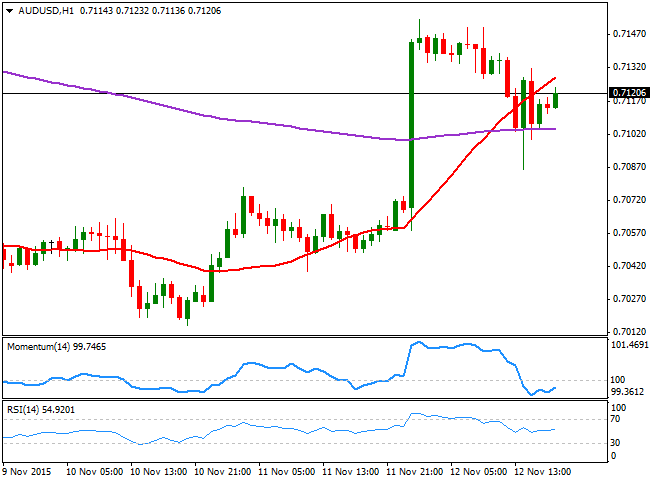 The Australian dollar soared against most of its rivals at the beginning of the day, following the release of Australian employment figures for October, showing that the economy managed to add 58,600 new jobs, almost four times more than expected, whilst the unemployment rate fell to 5.9% its lowest since April 2014. And while the market is still discussing whether those numbers are reliable, the AUD/USD pair added 100 pips right after the release, reaching a daily high 0.7153. An intraday dip met buying interest at 0.7086, and the pair is firmly above the 0.7100 level by the end of the US session, which suggests the upside is favored, at least in the short term. Technically, and according to the 1 hour chart, a bullish continuation is not yet confirmed, given that the price is below a bullish 20 SMA, whilst the RSI indicator is flat around 54 and the Momentum indicator aims higher, but below its 100 level. In the 4 hours chart, however, the upward seems more constructive, with the price recovering well above a bullish 20 SMA, and he technical indicators resuming their advances after a limited downward move well above their mid-lines.