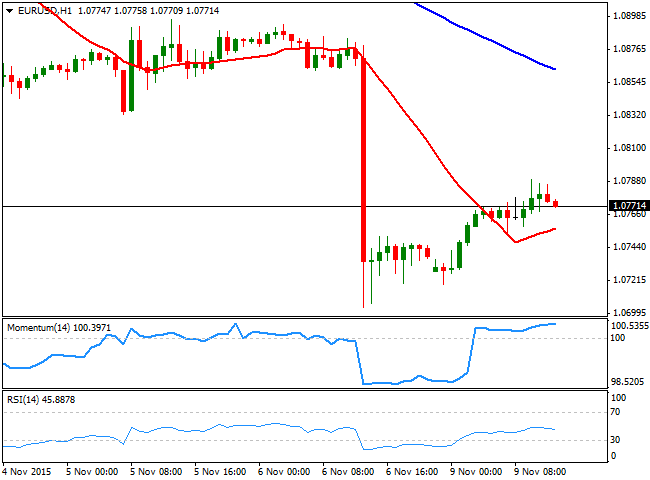 The American dollar is giving back some of its recent gains this Monday, albeit the decline is barely corrective, given that the greenback has reached overbought levels against most of its rivals last Friday. The EUR/USD pair has reached a daily high of 1.0789 as local share markets retreated some, but the upside remains limited. Early data showed that German trade balance reached a surplus of €22.9 billion in September 2015, whilst exports and imports jumped  well above expected in September, reversing the declines from previous months. With only some minor reports scheduled for the American session, the pair remains below the 1.0800 level, with limited upward potential in the short term, as the 1 hour chart shows that the Momentum indicator has host its upward strength after recovering above its 100 level, whilst the RSI indicator is resuming its decline around 45, having corrected the extreme oversold readings reached last Friday. In the 4 hours chart, the 20 SMA maintains a strong bearish slope above the current price, offering an immediate resistance around 1.0820, whilst the technical indicators have turned south well below their mid-lines and after correcting extreme oversold readings, supporting further declines  particularly on a break below 1.0700. 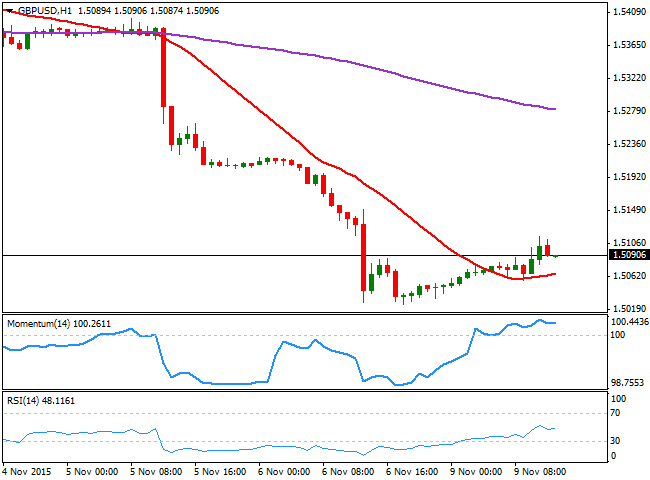 The GBP/USD pair posted a daily high of 1.5114, but struggles to hold above the 1.5400 level ahead of the US opening. There were no fundamental releases in the UK this Monday, and with little ahead in the US, the pair may well remain directionless during the American session. Technically, the 1 hour chart shows that the price is now above a flat 20 SMA, whilst the technical indicators have extended from extreme oversold readings into positive territory, lacking upward momentum at the time being. In the 4 hours chart, the price remains well below a sharply bearish 20 SMA, whilst the technical indicators have corrected the extreme readings, but are regaining the downside in oversold territory, maintaining the  risk towards the downside. 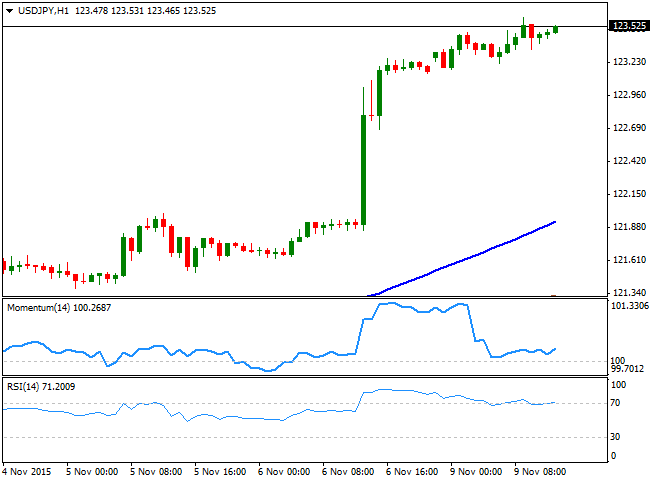 Overbought, but no signs of reversing. The USD/JPY pair advanced up to 123.59 and remains nearby, holding to its latest gains and pointing to extend its advance during the upcoming sessions, given that the 1 hour chart shows that the Momentum indicator has erased all of its overbought readings down to its mid-line, from where it is now bouncing, while the RSI indicator stands flat around 70. In the same chart, the 100 SMA has advanced far above the 200 SMA, but both remain well below the current level. In the 4 hours chart the price is holding near its highs whilst the technical indicators look slightly exhausted towards the upside. Nevertheless, the upside remains favored, with a break above 123.80 opening doors for an advance towards the year high at 125.80.

The Australian dollar opened with a downward gap against its American rival, following poor Chinese trade balance data released over the weekend. The AUD/USD however, held above Friday's low of 0.7031 and advanced up to 0.7069 before retreating some. Confined in a tight range, the 1 hour chart shows that the price is above a mid bullish 20 SMA, whilst the Momentum indicator turns lower above its 100 level and the RSI indicator also turns lower but at 42, increasing the risk of a downward continuation. In the 4 hours chart, the price is well above a bearish 20 SMA, whilst the technical indicators are gaining bearish slopes below their mid-lines and after correcting oversold readings, supporting the shorter term view.