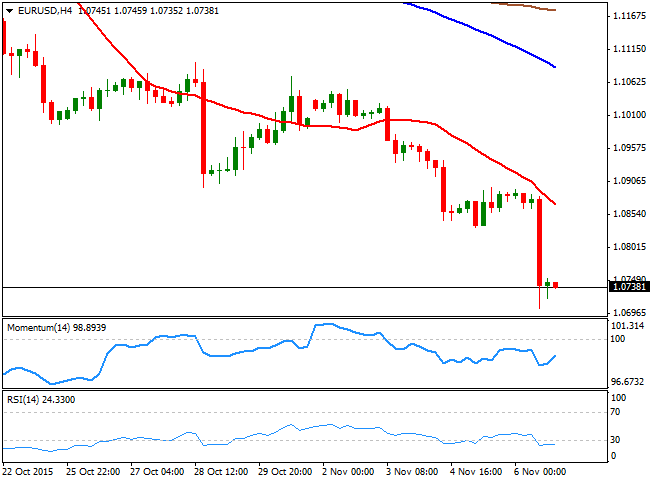 The American dollar closed last week at its highest in several weeks against all of its major rivals, following the release of a shockingly positive US employment report. According to the latest release, the US economy added 271,000 new jobs in October, while the unemployment rate fell to 5.0%, its lowest in seven years. Wages also beat expectations, and have now risen 2.5%  year over year, paving the way for a rate hike in December. The USD advanced sharply right after the release, and spent all of the American session consolidating its gains.

Over the weekend, China released its trade balance figures, which shown a surplus of 393.2 billion Yuan in October. Exports declined for a fourth straight month, while Imports fell for a twelfth straight month, in line with the recent economic slowdown of the country. The dollar may advance further, and even gap at the opening, following this news.

The EUR/USD pair dipped to 1.0703, to finally settle at 1.07381, unable to advance beyond 1.0760, now an immediate short term resistance. Trading at levels not seen since late April this year, the daily chart shows that the 20 SMA has crossed below the 100 and 200 SMAs far above the current level, whilst the technical indicators present strong bearish slopes, despite being in oversold territory, all of which supports further declines. In the 4 hours chart, the Momentum indicator aims higher below its 100 level, whilst the RSI indicator remains flat around 24, maintaining the risk towards the downside, particularly on a break below 1.0700. 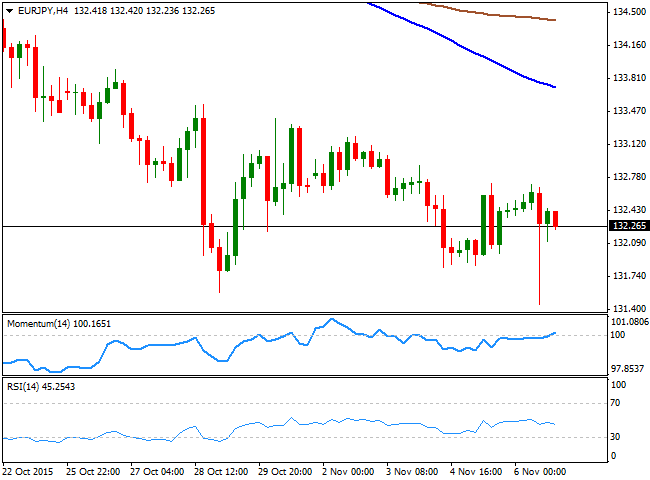 The EUR/JPY pair fell down to 131.44 last Friday, but closed the day pretty much unchanged around 132.30, amid the even weakness of the EUR and the JPY against the greenback. Nevertheless, the pair maintains the bearish tone seen over the last two weeks, as the daily chart shows that it established a lower low below its 100 and 200 SMAs, whilst the technical indicators maintain their bearish slopes well into negative territory. In the 4 hours chart, however, the Momentum indicator aims slightly higher above its mid-line, partially limiting the downward potential, although with the price well below its moving averages and the RSI indicator heading south around 45, chances of an upward move seem also limited. The immediate support stands at 131.80, with a break below it probably indicating fresh monthly lows below the 131.00 level. 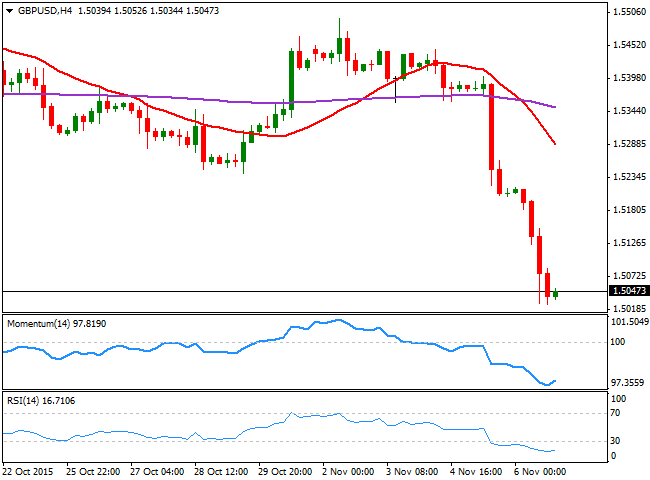 The British Pound plunged to a fresh 7-month low against the greenback, and closed the week a handful of pips above the 1.5026 low, having taken a double hit in the chin last week. The negative surprise offered by the BOE, delaying a rate hike in the UK, and the outstanding US employment report, fueling chances of a December lift off, highlighted the imbalance between the Central Banks, leading to a 360 pips decline in two days. The fall stalled a few pips above the 1.5000 critical figure, yet the risk of a break below it has grown exponentially, and may result in a retest of the year low of 1.4565 before the year end. Technically, the daily chart supports a bearish continuation, given that the price stands now far below its 20 SMA, whilst the technical indicators maintain their sharp bearish slopes near oversold levels. In the 4 hours chart,   the technical indicators have partially reverted their negative tone, but remain in extreme oversold territory, far from suggesting an upward corrective movement. 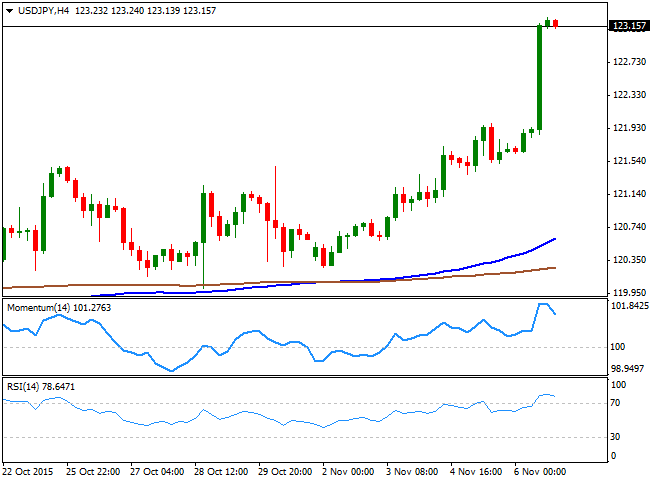 The USD/JPY pair staged a sharp rally, posting its largest weekly gain in over six months, and closing at 123.15, a few pips below the 123.26 high. The pair was already on demand ahead of the US employment report release, having started the day above its 100 and 200 DMAs for the first time since late August, and got fueled by the strong readings, supportive of a US rate hike for next December. From a technical perspective, the daily chart shows that, despite having advanced above the mentioned moving averages, these last lack directional strength, still flat and in a 20 pips range. The technical indicators, however, present a strong upward momentum in overbought territory, in line with a continued advance. Shorter term, the  4 hours chart shows that  the technical indicators have lost their upward strength and turned lower, but that they are still in extreme overbought levels. Given the limited retracement from the high and the tight consolidation near it, the risk remains towards the upside, with the market now targeting the year's high at 125.80. 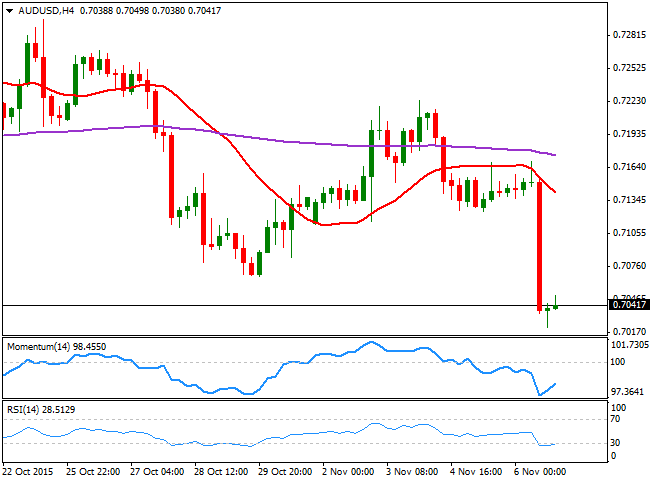 The Australian dollar started last Friday with an upward move, following the release of mixed RBA Minutes, but finally succumbed to dollar's strength, with the AUD/USD pair ending the week at 0.7041. The Australian Central Bank offered a relatively upbeat outlook for the economy, yet at the same time downgraded their inflation and growth forecasts.  The daily chart for the pair shows that, after being rejected from a bearish 20 SMA last week, the price has accelerated its decline, whilst the technical indicators have turned sharply lower below their mid-lines, supporting further declines this week, particularly after the release of poor China's trade balance data over the weekend. Shorter term, the 4 hours chart shows that the Momentum indicator has bounced some from oversold levels, but that the RSI indicator remains flat in oversold levels, leaving little room for a recovery in the short term.

EUR/USD has extended its falls under 1.2150 as the risk-off mood and elevated US bond yields favor the dollar. The EU is pressing to accelerate its vaccination campaign. President Biden's stimulus bill ran into a snag. The Fed's preferred inflation measure and end-of-month flows are eyed.

GBP/USD tumbles toward 1.39 as the dollar storms the board

GBP/USD has fallen sharply, trading above 1.39 but some 300 pips under the weekly highs. The US dollar picks up bids as the bond market rout seems to resume. BOE Governor Bailey expects a negative first quarter for the economy.

Gold remained under some selling pressure on the last trading day of the week. A broad-based USD strength weighing on the dollar-denominated commodity. The risk-off mood did little to impress bulls or lend any support to the XAU/USD.

The DXY's recovery rally from the seven-week low of 89.68 reached early Thursday has stalled, with the US 10-year Treasury yield retreating from the 12-month high of 1.55% to 1.49%. As such, stocks came under pressure on Thursday, boosting haven demand for the greenback.