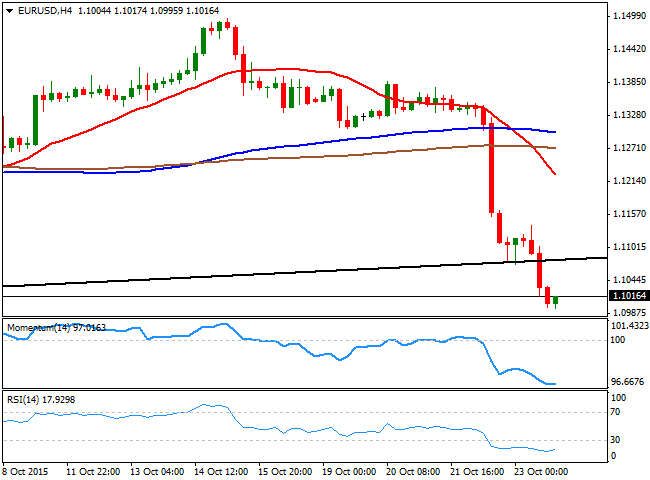 The American dollar extended its advance further on Friday, following the PBoC decision to slash its rates again. The Chinese Central Bank decided to reduce its benchmark lending rate by  25 bps and the reserve requirements  ratio for banks by 50 bps during the European morning, the sixth time since November last year the bank cuts rates. The movement seems far from enough to boost the economic recovery, given the result of previous similar decisions, but stocks markets welcomed the second in-a-row announcement of more easing coming from a major Central Bank, and soared, with European equities at fresh 2-month highs and leading to a EUR/USD decline towards the 1.1000 level.

The common currency has been the worst performer this week, already weakened after the ECB announced it may extend its easing program next December. The EUR/USD pair shed around 400 pips in the last two trading days, with almost no upward corrective movements in the middle, falling as low as 1.0995 before bouncing some. The pair has broken below a long term ascendant trend line coming from April low at 1.0519, and the break has strong bearish implications, regardless whatever the US FED announces this week in its Thursday´s policy meeting. As long as upward corrective movements meet selling interest around 1.1120, the downside remains favored. Technically, the daily chart shows that the pair is  currently below its moving averages, with the 200 DMA converging with the broken trend line around 1.1120, the mentioned critical resistance, whilst the technical indicators maintain their strong bearish slopes below their mid-lines. In the 4 hours chart, the technical indicators have lost their bearish potential, but remain in extreme oversold readings, far from suggesting the pair may correct higher. Renewed selling interest below 1.1000, should lead to a continued decline down to 1.0920 this Monday, with the ultimate bearish target for this week at 1.0840. 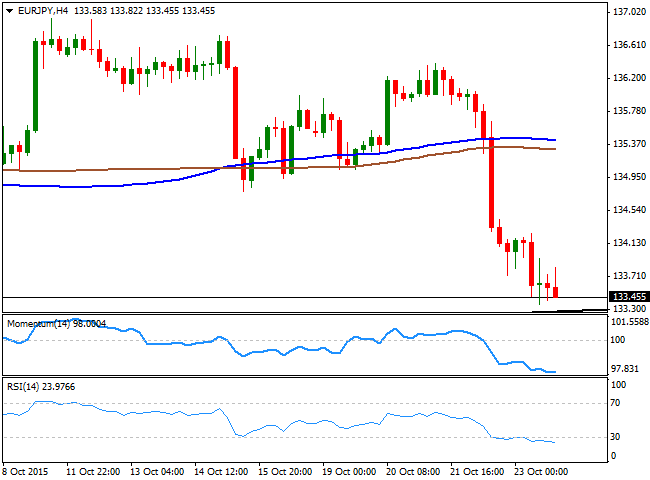 The  EUR/JPY pair fell down to 133.36, weighed by the EUR self weakness, and despite the Japanese Yen eased also against most of its rivals. The pair has stalled its decline a few pips above the base of the huge daily symmetrical triangle that has determinate the trading range ever since late April, and has posted so far a shallow decline, increasing the risk of further long term declines. The daily chart shows that the price is back below the 100 and 200 SMAs that anyway continue to lack directional strength, whilst the trend line comes at 133.20 for this Monday, and the technical indicators present limited bearish slopes below their mid-lines. In the 4 hours chart, however, the bearish momentum remains firm in place, with the technical indicators heading south, despite being in extreme oversold levels, while the 100 and 200 SMAs, remain in a tight range 20 pips range and with no directional strength in the 135.30/50 region. A downward acceleration below the mentioned 133.20 level, also September 23rd daily low, should lead to a continued decline down to 132.25, September monthly low. 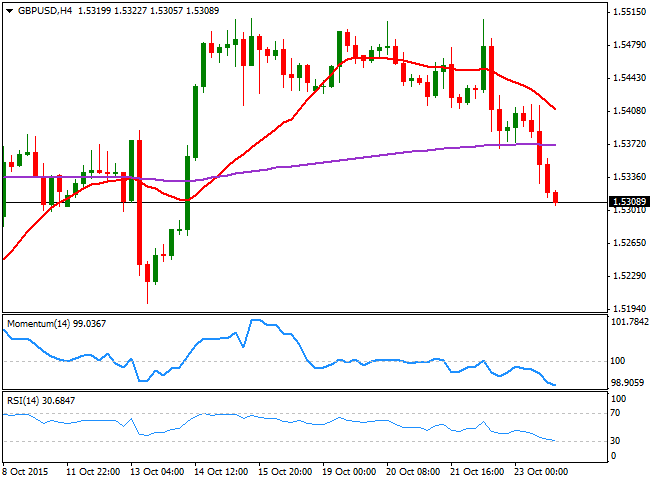 The British pound gave back all of its recent gains against the greenback, falling down to 1.5305 last Friday, a level not seen since October 14th. Despite the UK macroeconomic data continued reflecting  a steady growth in the kingdom, the Pound capitulated to dollar's demand. The UK will release its third quarter preliminary GDP readings next Tuesday, expected at 0.6% from the previous reading of 0.7%, and if the result misses expectations,  could lead to further declines in the GBP. Technically, the daily chart points to further declines ahead, given that  the pair broke below its 20 SMA, whilst the technical indicators are crossing their mid-lines with a sharp bearish slope. Shorter term, the 4 hours chart also presents a strong bearish tone, given that the price has extended well below a bearish 20 SMA, and even below its 200 EMA, whilst the technical indicators maintain their strong negative slopes well below their mid-lines. 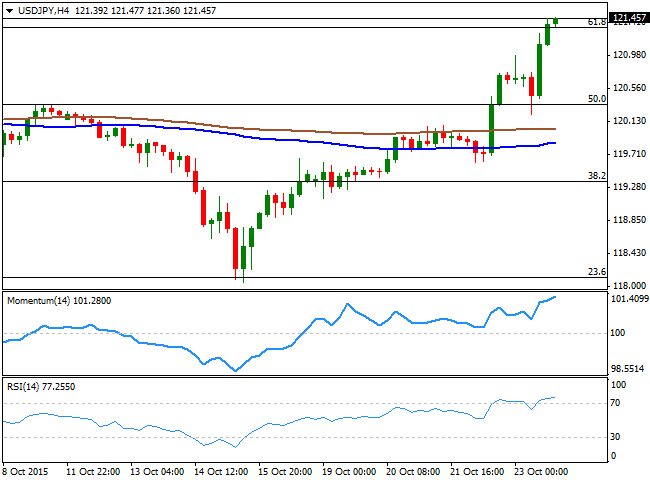 The USD/JPY pair closed at its highest since August 30th, rallying up to 121.47 on Friday. The advance was supported by the strong upward momentum in worldwide stocks, but also on speculation the Bank of Japan will extend its economic facilities in the meeting it will have this week. Japanese inflation remains well below the 2.0% target, and a more aggressive monetary policy stance has been on the table for over a month already, moreover, as the Central Bank will release this time its semi-annual outlook on the economy.  The pair has advanced steadily during the past two weeks, and the rally stalled around its 200 DMA, although generally speaking the technical picture is quite bullish in the daily chart, as the technical indicators present strong bullish slopes well above their mid-lines. The 100 DMA stands at 121.70, providing an immediate resistance for the upcoming sessions. Shorter term, and according to the 4 hours chart, the bullish potential is also firm in place, as the Momentum indicator continues heading north, despite being in extreme overbought levels, whilst the RSI indicator consolidates around 77. 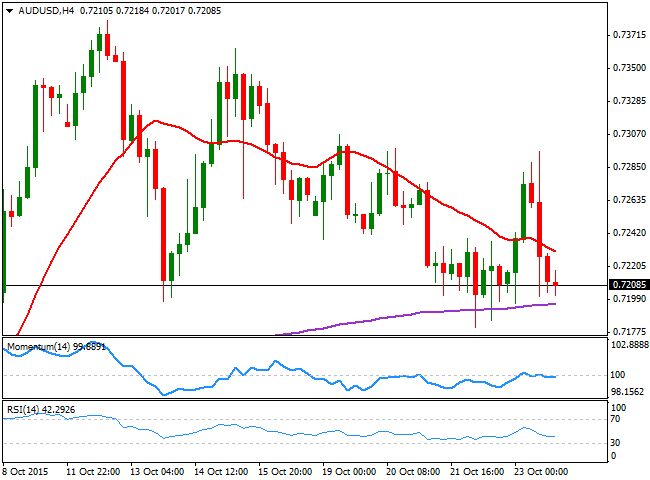 The AUD/USD closed in the red for a second week in-a-row, although the decline has been limited, as the Aussie got a boost from Chinese's Central Bank easing decision. The pair jumped to an intraday high of 0.7295 on Friday, but strong selling interest continued to cap rallies on approaches to the 0.7300 figure, leading to a 100 pips decline afterwards. Having closed near its low of the week of 0.7181, the antipodean currency was also weighed by a decline in commodities, particularly precious metals. Technically, the daily chart shows that the price is a few pips below a still bullish 20 SMA, although the Momentum indicator has turned sharply lower and is about to cross its 100 level towards the downside, whilst the RSI indicator also heads south around 50, anticipating some further declines on a break below the mentioned 2-week low. In the 4 hours chart, the price is holding above a horizontal 200 EMA, but below a bearish 20 SMA, whilst the technical indicators lack directional strength, albeit the RSI indicator stands around 42, increasing the risk of a downward continuation.

AUD/USD extends gains above0.7300 amid mixed Australian trade data and the upbeat market mood. The risk sentiment got a boost following reports that the US GSA has started the formal Biden transition process. S&P 500 futures rise 0.50%. RBA Debelle's speech awaited.