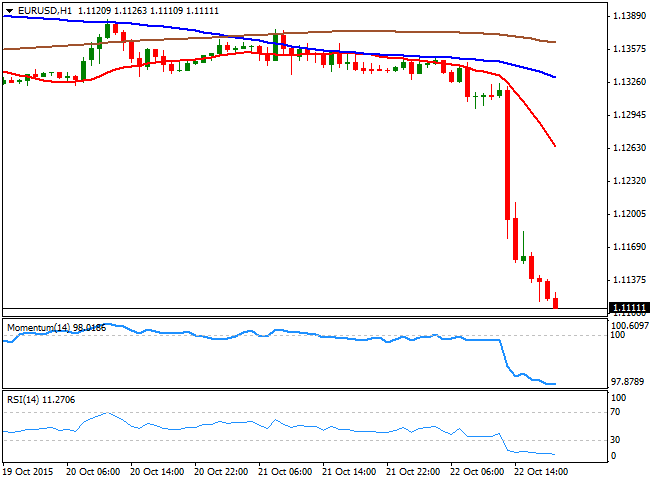 ECB's President, Mario Draghi, surprised the markets with his announcement this Thursday, which lead to one of the largest EUR/USD intraday declines in almost two months. The Central Bank statement signaled that the ECB may add additional stimulus in December, either by expanding its assets purchases, or lowering the deposit rate further below zero, something that officials even discussed this month. The pair plunged also on the back of positive US data, which fueled dollar's demand. Weekly unemployment claims, in the North American country fell to 259 against expectations of 266K, sending the four-week average to its lowest since 1973. Additionally, US Existing Home sales rebounded strongly in September, increasing by 4.7% to a seasonally adjusted annual rate of 5.55M. European stocks soared after the news, and the US indexes followed, closing at their highest since mid August.

The EUR/USD pair approached 1.1100 by the end of the US session,  and consolidates near the mentioned low, with no signs of changing bias any time soon. Nevertheless, the pair has reached a major long term support area, and given that the pair lost over 200 pips pretty much straight, it may attempt an upward corrective movement before resuming its decline. Short term, the 1 hour chart shows that the technical indicators have lost their bearish strength, but hold in extreme oversold levels, while in the 4 hours chart, the Momentum indicator maintains a sharp bearish slope near oversold territory and the RSI indicator stands at 19. The next strong support comes at 1.1080, a long term ascendant trend line coming from 1.0591, April monthly low, which if broken, should lead to a test of the 1.1000 critical figure in the near term. 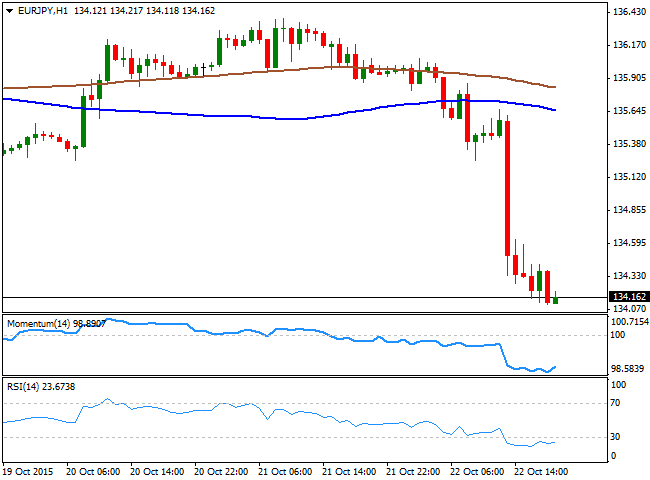 The  EUR/JPY pair followed suit, dropping down to 134.11, a fresh 3-week low, as investors dropped the common currency on the back of an ultra-dovish stance from the ECB. The pair fell through its 100 DMA and is now pointing to close the day below the 200 DMA, at 134.50, which points for a continued decline over the upcoming sessions. Short term, the 1 hour chart shows that the price has declined far below its moving averages, whilst the technical indicators have lost their bearish strength and turned slightly higher, still in oversold territory. In the 4 hours chart, the Momentum indicator maintains its strong bearish slope, whilst the RSI heads lower around 28, all of which supports additional declines on a break below 134.00, the immediate support. 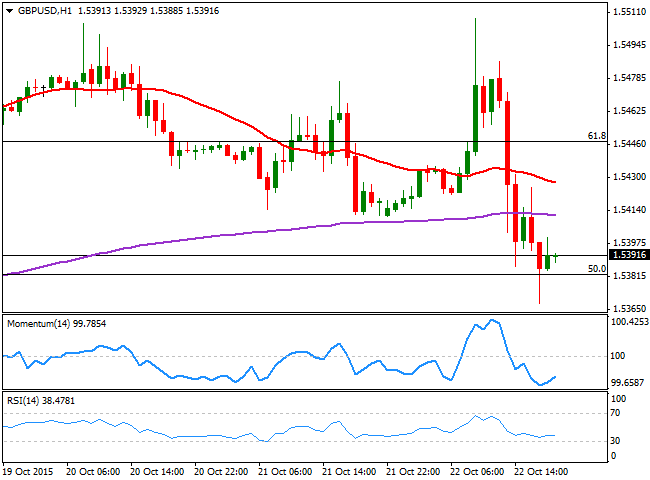 The British Pound enjoyed of some temporal strength, at the beginning of the European session, advancing up to 1.5507 following the release of the UK Retail Sales figures for September. Sales in the UK grew by 1.9% monthly basis, against expectations of a 0.4% advance, whilst compared to a year before, sales jumped by 6.5% against the 4.8% expected. The pair however, was unable to sustain gains beyond the 1.5500 level, quickly pulling back down, and accelerating its decline on broad dollar's demand triggered by the ECB. The slide was moderate, with the pair setting a daily low of 1.5368 and consolidating below the 1.5400 level in the American afternoon. Technically, the 1 hour chart shows that the price is now below a mild bearish 20 SMA, whilst the technical indicators have turned slightly higher below their mid-lines, limiting chances of a continued decline. Also, the price is holding above the 50% retracement of its latest bearish at 1.5380, the immediate support. In the 4 hours chart, the 20 SMA is slowly turning lower around 1.5445, whilst the technical indicators present bearish slopes below their mid-lines, in line with further declines as long as 1.5415, attracts selling interest. 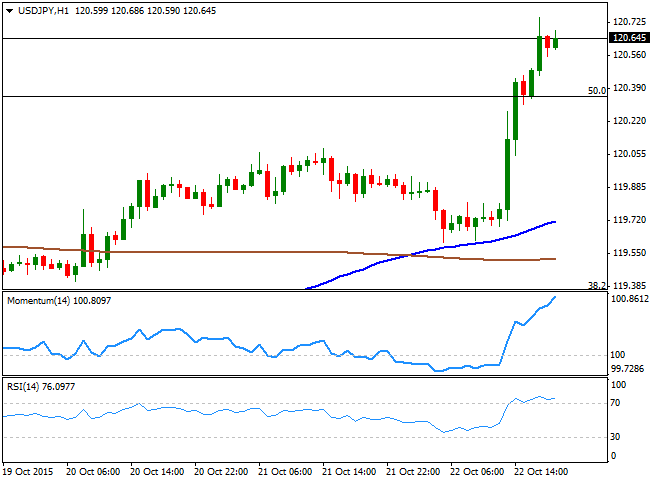 The USD/JPY surged to 120.74, an almost one month high, boosted by a strong advance in European and American stocks, after the ECB's President, Mario Draghi, announced the Central Banks is ready to throw more money into the economy. The pair has been advancing on speculation the Bank of Japan will increase its stimulus in its upcoming economic policy meeting by the ends of October, but with no momentum, until today. The pair broke above the 120.35 level, now an immediate support, as per being the 50% retracement of the latest weekly decline. Short term, the 1 hour chart shows that the price has advanced above a now bullish 100 SMA, whilst the technical indicators present strong upward slopes, despite being in overbought territory. In the 4 hours chart, the technical indicators also head higher in overbought territory, with no aims of changing bias any time soon. Renewed advances should lead to the test of a critical resistance and the top of the latest range at 121.35 the level that capped the upside since late August. 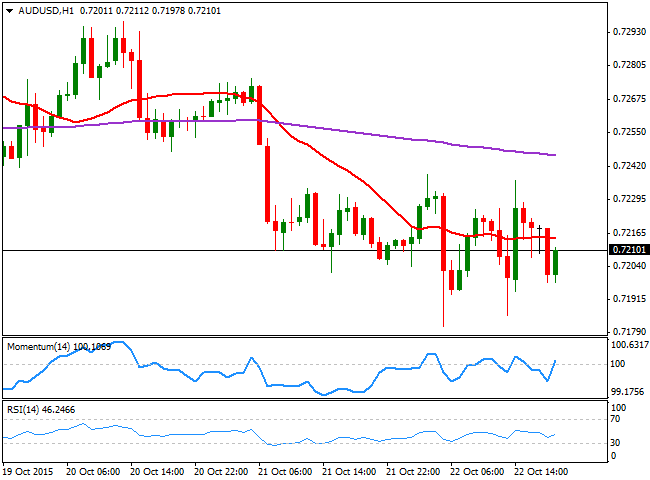 The AUD/USD pair closed the day with limited losses, but not before setting a fresh weekly low of 0.7181 during the previous Asian session, following a sharp decline in Chinese stocks. The pair hovered between gains and losses afterwards, finally ending the day a few pips above the 0.7200 level, helped by the sharp advance in stocks. During the upcoming hours, China will release some minor housing data, alongside with the September CB Leading Economic index, and while none of them is usually a big market mover, disappointing results may put the Aussie under pressure. Short term, the 1 hour chart presents a neutral stance, with the price developing a few pips below a horizontal 20 SMA and the technical indicators hovering around their mid-lines with no actual directional strength. In the 4 hours chart however, the bearish tone prevails, as the 20 SMA maintains a strong bearish slope above the current level, whilst the technical indicators turned south in negative territory, after failing to extend beyond their mid-lines.

AUD/USD battles 0.73 on Biden transition news, ahead of data

AUD/USD jumps in tandem with the S&P 500 futures on reports that the US GSA has started the formal Biden transition process. The US dollar clings on to gains amid stronger US data. Australia’s preliminary Trade Balance, RBA’s Debelle in focus.

GBP/USD was the best performing USD major on Monday, with the EU and UK seemingly moving ever closer to a deal. The pair nearly surpassed 1.3400 before slipping below 1.3300 on post-data USD strength, although has now recovered back to 1.3320.

Peter Brandt, author, and publisher of the Factor Report, has exited around 50% of his Bitcoin position. The veteran trader believes Bitcoin might be poised for a correction to $12,000 in the near future.