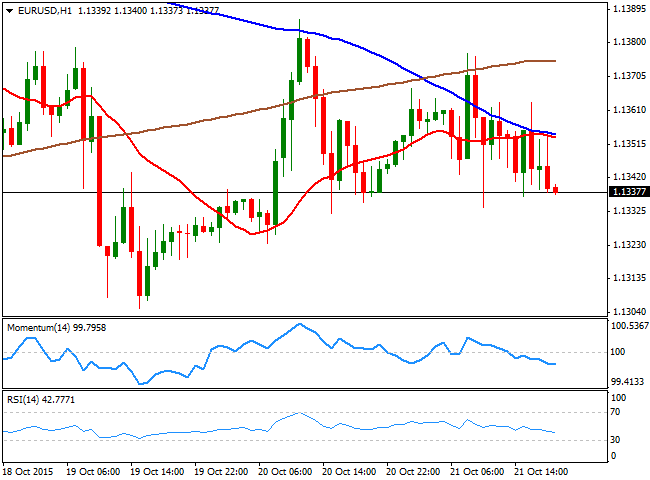 Majors were trading in their weekly dull ranges at the beginning of this Wednesday, but a sudden decline in gold prices  following Wall Street's opening, was the kickoff signal for the greenback to rally. Ending the day with uneven gains, the American currency is higher against all of its majors rivals, with the EUR/USD pair being the most reluctant to move far away, as investors are waiting for the ECB  policy meeting outcome this Thursday. The European Central Bank is largely expect to maintain its ongoing stimulus unchanged, with Draghi offering a dovish tone, and aiming to down talk the EUR, as the currency has returned to the levels it was in January, when the ECB  launched its QE program.

The pair remained confined to a 50 pips range ever since the day started, and trades a handful of pips below the daily opening by the US close. The technical  picture is neutral-to-bearish in the short term, as in the 1 hour chart, the technical indicators present mild bearish slopes below their mid-lines, whilst the price is below its moving averages that anyway lack clear directional strength. In the 4 hours chart, the price is hovering around a mild bearish 20 SMA, whilst the technical indicators remain stuck around their mid-lines. The upcoming moves will be determinate by the ECB's decision, with the main support being at 1.1280, and the main resistance at 1.1400, where selling interest has contained advances ever since the week started. 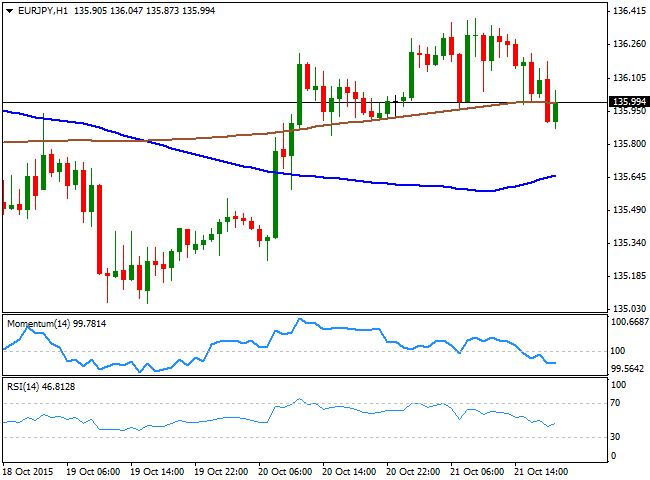 The EUR/JPY closed the day unchanged around the 136.00 level, after advancing up to 136.38 intraday. The Japanese yen came under selling pressure after the release of worse-than-expected local trade balance figure during the previous Asian session, posting a sixth consecutive deficit monthly basis, against expectations of a ¥84.4B surplus. Nevertheless, the lack of interest in the EUR kept the pair within a limited range and its currently turning short term bearish, given that the 1 hour chart shows that the price is struggling to hold above its 200 SMA and that the technical indicators have entered negative territory, presenting a limited bearish potential at the time being. In the 4 hours chart, the price holds above its 100 and 200 SMAs that present a mild positive tone, whilst the Momentum indicator aims higher above the 100 level, but the RSI indicator turned lower around 53. 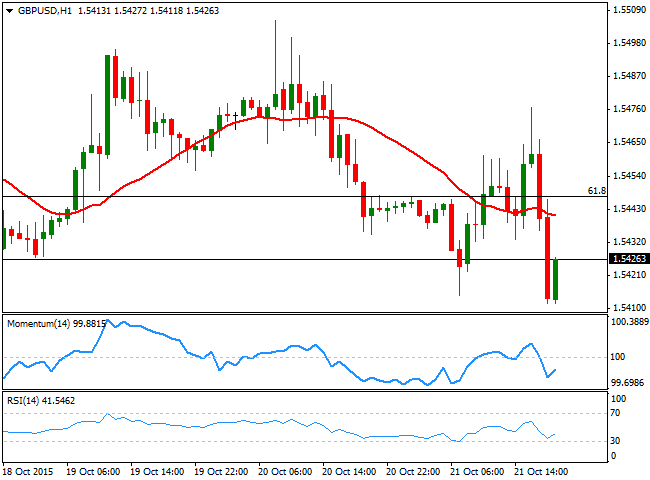 The GBP/USD pair fell as low as 1.5411 during the American afternoon, following BOE's Governor Mark Carney speech on the economic impact of a possible 'Brexit.' Despite he made no references to economic policies in the UK, Carney highlighted the positive effects of belonging  to the EU, and said that the Bank may need to adjust its monetary policy accordingly to the result of the referendum. The UK will release its September Retail Sales figures for September this Thursday, expected to have risen by 0.4% from a previous monthly reading of 0.2%.  The Pound may get a boost from better-than-expected readings, but the latest decline, with the pair now pressuring the lows of its latest range, increases chances of a downward continuation for this Thursday. The 1 hour chart presents a mild negative tone, with the price now extending below its 20 SMA and the technical indicators in negative territory, albeit lacking directional strength. In the 4 hours chart, the price failed to sustain gains on an early advance spike above its 20 SMA, whilst the technical indicators turned south and maintain strong bearish slopes in negative territory, in line with further declines. 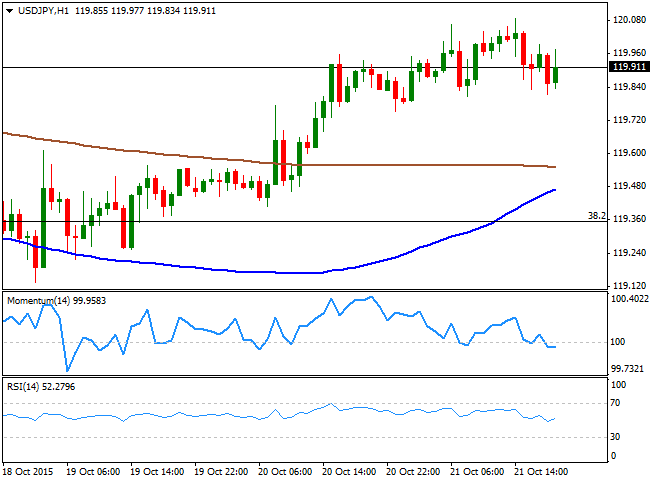 The USD/JPY pair advanced up to 120.08, ending the day around the 120.00 level, extending its tepid rally for a fifth day in-a-row. Ever since bottoming at 118.05 last week, the pair has been advancing slowly, but steadily, mostly as latest disappointing Japanese data suggest the BOJ will extend its stimulus in its upcoming meeting by then ends of October. Wednesday's rally came after the Japanese September trade balance posted a deficit of ¥114.5B against market's expectations of a ¥84.4B surplus. Imports resulted better than expected, falling by 11.1% against market's forecast of an 11.7% decline, while exports grew by 0.6%. The 1 hour chart shows that the price has advanced further above its moving averages whilst the 100 SMA accelerated its advance, but remains below the 200 SMA. In the same chart however, the technical indicators have lost their early strength and turned flat around their mid-lines. In the 4 hours chart, the price stalled its advance around the 200 SMA, whilst the technical indicators are also losing their upward strength but holding well above their mid-lines. 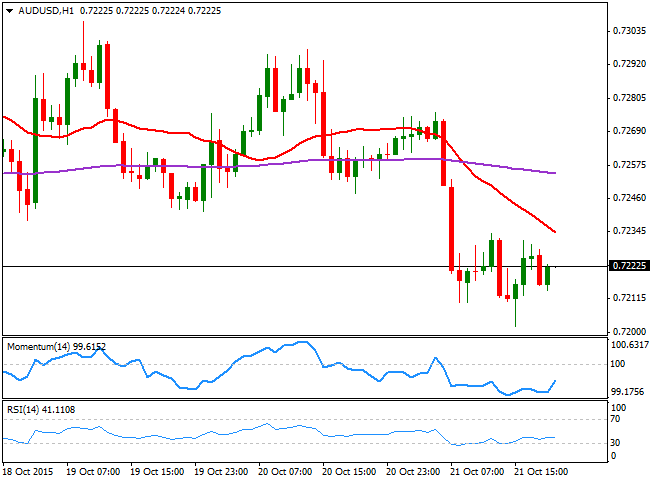 The AUD/USD pair plunged at the beginning of the day, weighed by a sharp decline in Chinese stocks and weaker commodity prices. The Aussie traded as low as 0.7201 during the American afternoon following the sharp decline in gold prices, with intraday bounces now finding selling interest around the 0.7240 level. Technically, the pair is poised to extend its decline in the short term, as the 1 hour chart shows that the price remains well below a strongly bearish 20 SMA, whilst the technical indicators consolidate in negative territory, rather reflecting the lack of downward momentum than suggesting downside exhaustion. In the 4 hours chart, the 20 SMA accelerated its decline above the current level, whilst the RSI indicator remains flat around 38, and the Momentum indicator aims higher, but remains below its 100 level. Should the price extend its decline below the 0.7200 figure, the bearish potential will increase, with the market then targeting 0.7130.

EUR/USD consolidates biggest losses in two weeks around 1.2100 as focus shifts to US Q4 GDP

EUR/USD keeps bounce off eight-day low but struggles to hold 1.2100. The currency major dropped to the lowest since January 18 the previous day. European Consumer Confidence, German inflation and US Jobless Claims can also entertain traders.

Spot gold (XAU/USD) prices have seen a very muted initial reaction to the release of the latest FOMC monetary policy decision and continue to trade just under the $1850 mark, with the price action still for now capped by the precious metal’s 200-day moving average, which sits at $1847.79.

XRP price primed to retrace below $0.20 as Ripple faces a new lawsuit

XRP is having a rough 2021. Ripple got sued by the SEC and now, the platform has been targeted again by another lawsuit, this time from Florida for the same reason. XRP is down more than 60% since its peak in 2020 at $0.78.

US Dollar Index: Awaits Federal Reserve to break the monotony above 90.00

US dollar index (DXY) extends recovery moves while picking up the bids to 90.22 during early Wednesday. The greenback gauge stepped back from a downward sloping trend line from November 02 the previous day.