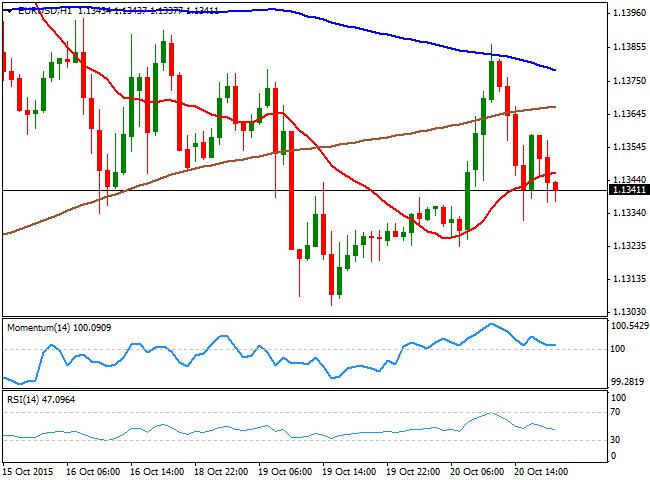 The major currency pairs traded in limited ranges for a second day in-a-row, amid a dramatic reduction in volumes ever since mid last week. Investors are waiting for clues over the upcoming economic policy decisions, starting with the ECB next Thursday and the BOJ and the FED by the end of the month.  Macroeconomic data released this Tuesday failed to trigger interesting moves, although in balance, things continue to look worsening in Europe, given that German producer prices index fell by 2.1% in September, compared to a year before, much worse than the previous -1.7%. The EU Current Account surplus for August, hardly a market mover, shrunk to €17.7B, while July data was revised higher, from €22.6B to €25.6B. In the US, housing starts rose by 6.5% in September to an annual rate of 1.21M, following two months of declines, and approaching the 8-year high reached past June.

The EUR/USD pair advanced up to 1.1386 in the European session,  following a positive opening in local share markets, although the pair faded alongside with stocks, which closed the day pretty much flat, a few points below Monday's close. Technically speaking the pair continues hovering around last week's close, lacking directional strength, although the risk is turning towards the downside in the short term, as the 1 hour chart shows that the early rally was capped by the 100 SMA, while the technical indicators have retreated from near overbought levels and stand now around their mid-lines. In the 4 hours chart, a brief advance beyond the 20 SMA was quickly reversed, and the indicator maintains a bearish slope, whilst the Momentum indicator has retreated from its mid-line and the RSI hovers around 46, limiting chances of a stronger rally for this Wednesday. 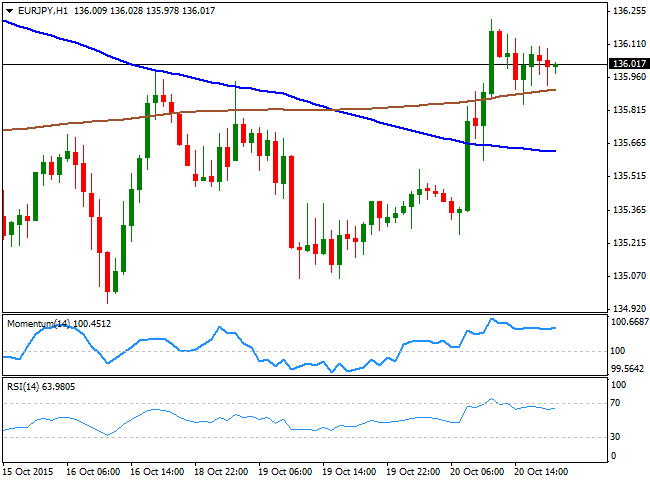 The EUR/JPY advanced on Yen's weakness, as the Japanese currency accelerated lower in the European morning, and extended its decline after the release of US housing data. The pair advanced up to 136.21 before retreating, as the negative tone in US stocks is helping the JPY in recovering some of the ground lost during the day. Despite the latest recovery, the short term picture is far from showing a strong upward momentum ahead, as the technical indicators are heading nowhere, albeit above their mid-lines, while the RSI indicator already turned south around 61. In the same chart, the pair is finding some short term support around the 200 SMA, currently at 135.90, whilst the 100 SMA maintains a bearish slope below this last. In the 4 hours chart, the technical indicator have turned south in positive territory, while the price has advanced above its 100 and 200 SMAs that anyway remain directionless in a tight 20 pips range. 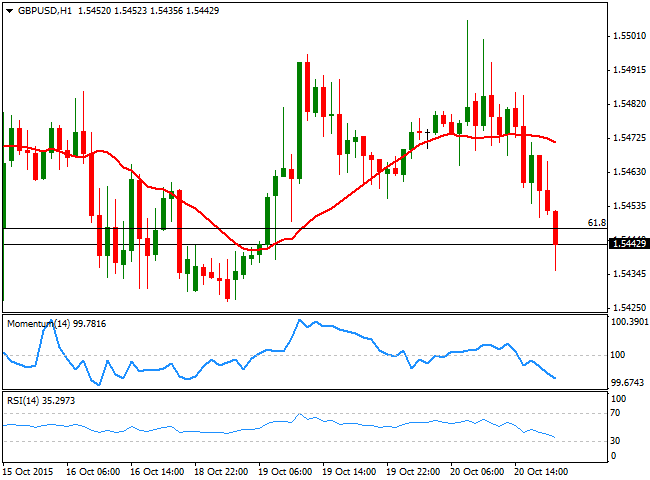 The GBP/USD pair advanced up to 1.5505 with the European opening, but once again failed to sustain gains beyond the critical level, and eased down to the 1.5430 region by the end of the US session. The Bank of England Governor, Mark Carney, offered  testimony about the Central Bank Bill before the Treasury Select Committee, in London, but he made no references to the UK economic policy, having a null effect on the Pound. Repeated failure around the 1.5500 level may discourage buyers, and result in a downward correction over the upcoming sessions. In the meantime, the short term technical picture shows an increasing bearish potential, as in the 1 hour chart, the price is extending below its 20 SMA, whilst the technical indicators head lower below their mid-lines. In the 4 hours chart, the technical stance is neutral-to-bearish, with the price now below a horizontal 20 SMA, and the technical indicators turning south around their mid-lines. October 15th daily low at 1.5415 is the support to break to confirm additional intraday declines, with the next support at 1.5380 the 50% retracement of the latest weekly decline. 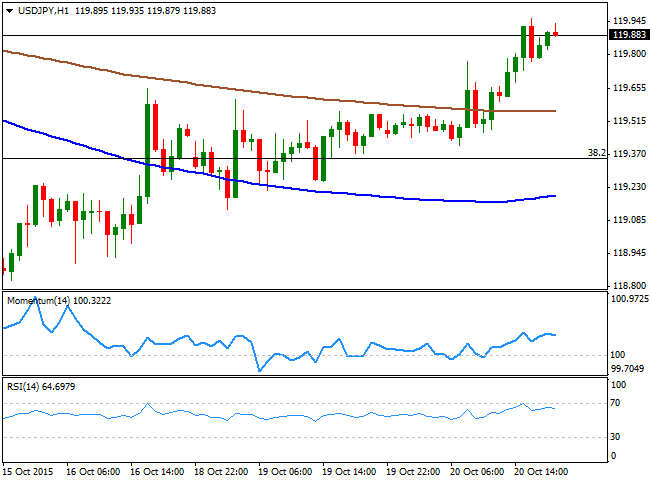 The USD/JPY pair advanced up to 119.95 this Tuesday, having started its advance with European stocks' positive opening, and accelerating after US strong housing data. Additionally, investors may be already pricing in the possibility of further stimulus in Japan next week, although a move from the BOJ is still unclear. During the upcoming Asian session, Japan will release its Trade Balance figures for September, expected to have posted a surplus of ¥84.4B against a previous deficit of ¥569.7B. Imports however, are expected to have decreased by 11.7% which may spur some fears over a steady global economic slowdown, and result in a stronger Yen on safe-haven demand. Technically, the 1 hour chart shows that the technical indicators are losing their upward strength, but holding well above their mid-lines, whilst the price is above its 100 and 200 SMAs. In the 4 hours chart, the price is now trapped between its 100 and 200 SMAs that anyway remain pretty flat, whilst the technical indicators also turned south, but remain well above their mid-lines, far from suggesting a continued decline. 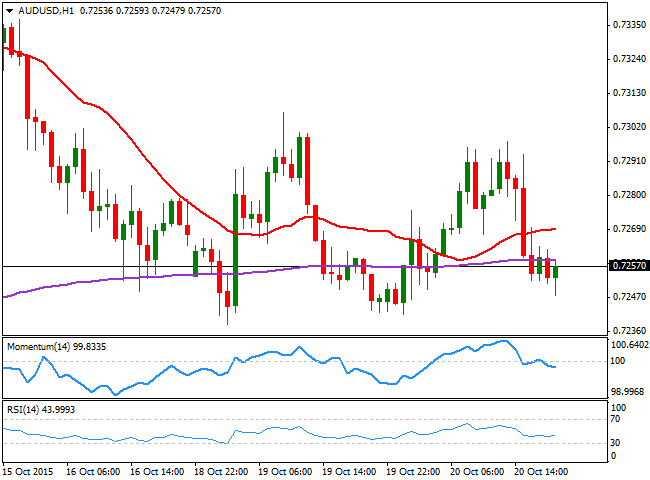 The AUD/USD pair traded as low as 0.7241 this Tuesday, ending the day a few pips above it, as selling interest once again contained the upside on attempts to rally beyond the 0.7300 figure. The Aussie rallied earlier in the day after the release of the RBA Minutes of its latest meeting, showing that the Central Bank does not consider cutting rates below the current 2% any time soon, as a low currency and also low interest rates have helped strengthen the labour market. Nevertheless, investors were no willing to increase their bets beyond the latest range, and the pair retreated to post the mentioned daily low, from where it bounced ahead of the US close. Short term, the 1 hour chart shows that the price is now below its 20 SMA whilst the technical indicators present a tepid bearish tone, lacking strength at the time being to confirm a continued decline. In the 4 hours chart, the price remains unable to advance beyond a now bearish 20 SMA, whilst the technical indicators head nowhere in negative territory.

GBP/USD consolidates above 1.3920 ahead of US NFP data

GBP/USD edges lower on Friday’s Asian trading session. The pair made a high near 1.3950 in the previous session but failed to holds the gains. US Dollar Index stays firm above 92.30 on upbeat economic data. The sterling remains unaffected post- BOE meeting.

A brief technical and on-chain analysis on ICON price. Here, FXStreet's analysts evaluate where ICX could be heading next as it looks ready to continue surging.

NFPs in US is expected to rise by 870,000 in July. There is a strong correlation between surprising NFP prints and major pairs' immediate movements. Investors are likely to react to a disappointing NFP more strongly than a positive reading.