The American dollar recovered some ground last Friday, ending the week pretty much unchanged against its European rival, around 1.1350. In Europe, macroeconomic readings showed that the EU inflation during September posted a slight increase compared to August one, matching expectations at 0.2% monthly basis. Euro area annual inflation was -0.1% in September 2015, down from 0.1% in August.  US data, on the other hand, was generally positive, as   the number of job openings decreased to 5.4 million in August, a little weaker than expectations, but still at high levels. Consumer sentiment climbed more than forecast in October, with the University of Michiganâ€™s preliminary consumer sentiment index up  to 92.1, the first advance in four months.

From a technical point of view, the EUR/USD pair maintains a positive tone daily basis, although failure at 1.1500 earlier in the week suggests a limited upward potential ahead. Nevertheless, the price holds well above its moving averages, with the 20 DMA acting as a critical support around 1.1280 for the upcoming days, whilst the technical indicators hold well above their mid-lines, albeit lacking upward momentum at the time being. Shorter term, the  4 hours chart presents a bearish tone, with the price having been unable to advance beyond its 20 SMA since last Wednesday, and the technical indicators maintaining strong bearish slopes in negative territory. Friday's low at 1.1330 provides an immediate support, with a break below it required to confirm a bearish continuation for this Monday. 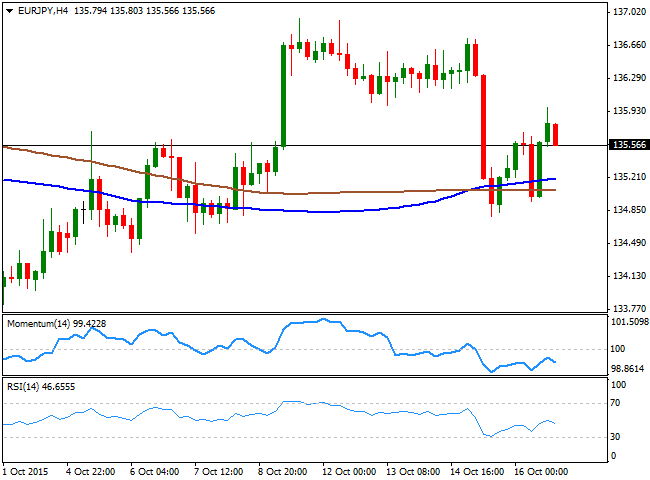 The EUR/JPY pair edged slightly higher on Friday, although negative in the week at 135.56. The Japanese yen gave back some ground as stocks closed higher in the US for a third week in-a-row, sending investors way from safe haven assets. The daily chat shows that the pair continues trading within a large symmetrical triangle, without not a clear trend ever since late July. In the same chart, the pair met selling interest around its 100 DMA at 135.92, the immediate resistance, but held above the 200 DMA, now at 134.46. Both moving averages are horizontal, reflecting the lack of directional strength. In the same chart, the technical indicators have bounced from their mid-lines, and maintain tepid bullish slopes. In the 4 hours chart, however, the technical indicators have been rejected from their mid-lines and head south, whilst the 100 and 200 SMAs hover around 135.00/10.

The  British Pound gave back some ground on Friday, but closed the week with solid gains against the greenback,  around 1.5440. The GBP turned sharply higher after local data showed that while inflation turned negative in September, wages surged. The combination of both may result in a boost in consumption for the upcoming months, which at the end will mean a continued improvement in the economic situation, and lead for a rate hike. There will be no relevant fundamental releases in the UK until next Thursday, when Britain will publish its Retail Sales data for September. In the meantime, the daily chart shows that the price is a couple of pips below the 61.8% retracement of its latest daily fall, whilst the technical indicators have lost their upward strength, but hold well into positive territory, and that the price is far above its 20 SMA. In the 4 hours chart, the Momentum indicator has turned sharply lower from overbought levels, and is about to cross its mid-line towards the downside, although the 20 SMA maintains a strong bullish slope around 1.5420, whilst the RSI indicator heads slightly lower around 55. A downward corrective movement may extend down to 1.5380, the 50% retracement of the mentioned rally, where buying interest will likely surge. 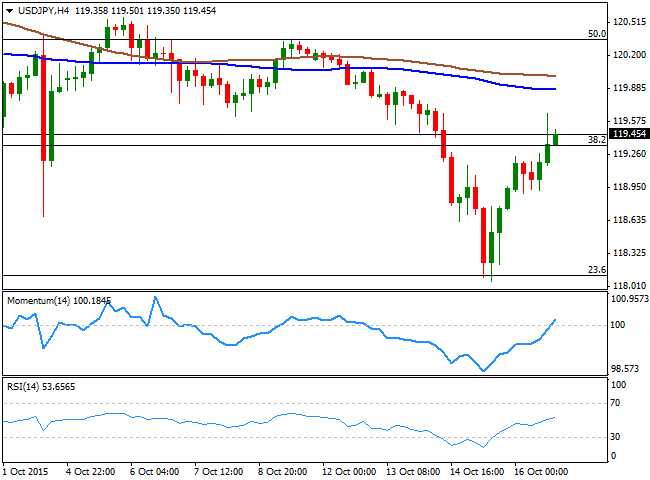 The USD/JPY pair has staged a strong comeback by the ends of the last week, recovering from a 2-month low of 118.05. The pair has reentered its latest range, although the negative tone persists according to the daily chart, as the technical indicators remain below their mid-lines, having however, lost their negative slopes and turned higher. In the same chart, the 100 DMA presents a mild bearish slope above the 200 DMA, both far above the current level. Shorter term, the 4 hours chart shows that  the technical indicators head sharply lower above their mid-lines, having maintained the positive tone ever since bottoming in extreme oversold levels. In this last chart however, the price is also well below its 100 and 200 SMAs, limiting chances of a stronger rally beyond 120.00. Currently trading a few pips above 119.35, the immediate Fibonacci support, a downward acceleration below the level should see the pair resuming the bearish momentum seen last week,  with the pair then heading back to the mentioned 2-month low, the 23.6% retracement of the latest weekly decline. 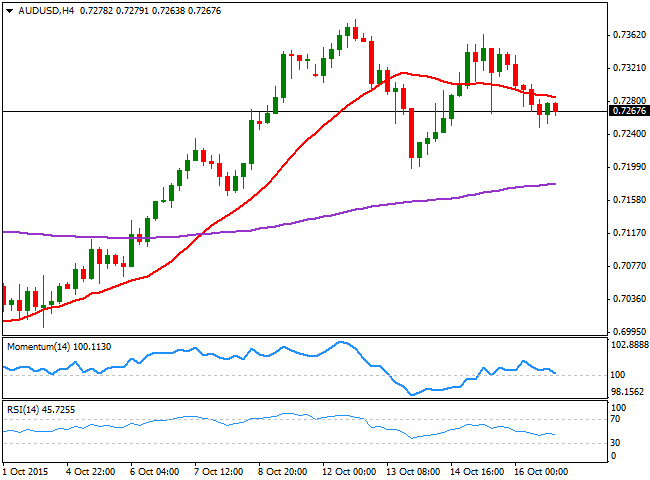 The AUD/USD pair shed ground on Friday, ending the week in the red at 0.7267, and having been under pressure ever since the day started. Weaker gold prices and rising stocks weighed on the commodity-related currency, but the Aussie suffered the most with the release of the RBA Financial Stability Report, which fueled speculation the Central Bank may cut rates further before the year end. At the beginning of this Monday, China will release its GDP figures, and the expectations are for a decline to 6.8% YoY in the third quarter, from a previous 7.% Should the decline surpass expectations, the Australian dollar will likely extend its decline towards the 0.7200 level, the next critical support. Technically, the daily chart shows that  the technical indicators are retreating from overbought levels, but at the same time, the price is well above a bullish 20 SMA, currently around 0.7150. In the 4 hours chart, the price has broken below a now bearish 20 SMA, whilst the technical indicators head lower around their mid-lines, in line with additional declines, particularly on a break below 0.7240, the immediate support.

AUD/USD: Critical levels in view, will bulls throw in the towel?

AUD/USD in the hands of the bears while below the critical structure. Bears remain committed and a test of the daily support structure could be on the cards. 0.7005 remains the line in the sand according to the daily chart.

Attention turning to the Fed in deadlock US stimulus talks 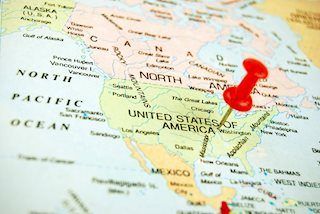 US stimulus talks have hit a roadblock after months of failed Congressional efforts to reach another stimulus agreement. Markets to pay more attention to the  Federal Reserve's asset-purchase plans.