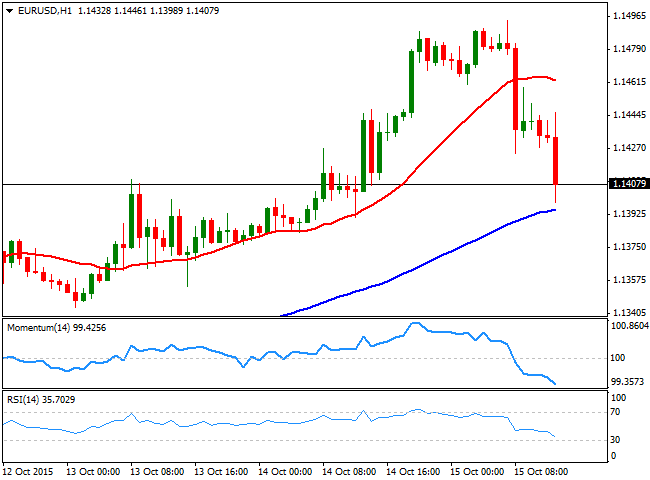 The American dollar trades lower against most of its major rivals, exception may by the EUR that fell to a daily low of 1.1424 on speculation the ECB may extend its QE program in its economic policy meeting next week, after ECB's Nowotny said additional measures need to be taken to reach the 2.0% inflation target. The pair bounced some after posting the low, but selling interest capped the upside around 1.1460, with the pair holding near its low ahead of the US batch of data. In the American country, September inflation resulted at -0.2% monthly basis as expected, and remained flat at 0.0% compared to a year before, beating expectations. The annual reading ex food and energy surged to 1.9% from previous 1.8%. Also, weekly unemployment claims fell down to 255K much better than the 270K expected, while the NY Empire manufacturing index posted a sharp drop, down by 11.36 against a decline of 8.00 expected.

The EUR/USD pair accelerated its decline towards 1.1400 after the releases, with the greenback advancing against all of its rivals. Technically, the 1hour chart for the pair shows that the price is well below its 20 SMA but above the 100 SMA around the mentioned low, whilst the technical indicators maintain sharp bearish slopes below their mid-lines. In the 4 hours chart, the price fell briefly below its 20 SMA, whilst the technical indicators continue correcting lower from extreme overbought readings. Nevertheless, buyers are aligned in the 1.1380/1.1400 region, meaning it will take a clear break below this level, to confirm a continued decline for this Thursday. 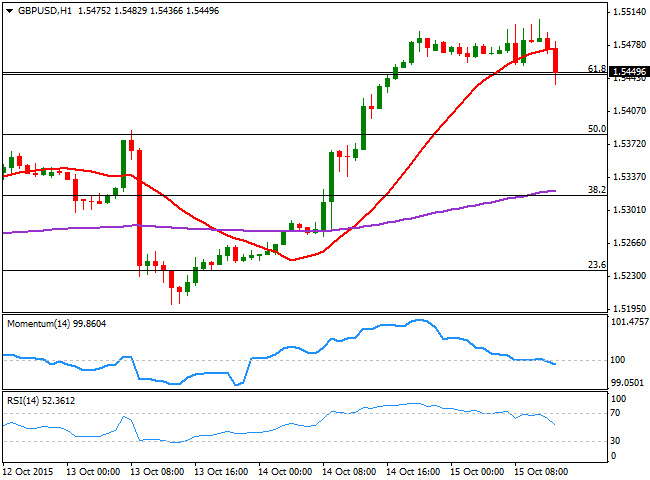 The Pound spent the first half of the day consolidating its latest gains against the greenback, having extended its rally by a few pips this Thursday, up to 1.5506.  With no macroeconomic events in the UK, the pair has been showing little directional strength,  until the release of US data, which sent the pair down to 1.5436. Hovering now around the 61.8% retracement of its latest daily decline at 1.5445, the 1 hour chart suggest the pair may decline further, as the price is accelerating below its 20 SMA whilst the technical indicators head lower below their mid-lines. In the 4 hours chart, the technical indicators are retreating from overbought levels, but remain well above their mid-lines, whilst the price is way above its moving averages, limiting the strength on any possible bearish movement.
Support levels:  1.5410 1.5375 1.5330 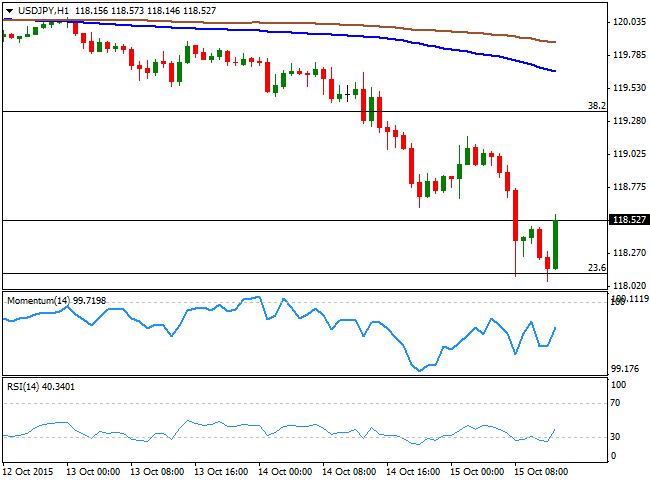 Bouncing from 118.05, upside seen limited. The USD/JPY fell sharply for a second day in a row, after finally breaking its almost 2-month range. The pair traded as low as 118.05 in the European morning, stalling around the 23.6% retracement of its latest decline. The release of US better-than-expected inflation and employment data, helped the pair to bounce up to 118.55, which is the base of the mentioned 2-month range. The 1 hour chart shows that the price is well below its moving averages, but that the technical indicators are bouncing strongly from extreme oversold levels, still well below their mid-lines. In the 4 hours chart, the technical indicators also turned higher, but are still in oversold territory, supporting an upward corrective movement should the price accelerate above the current level. The rally can extend up to 119.35, yet it sellers surged around this last, the risk will turn back lower, with the market then looking for a break of the mentioned daily low. 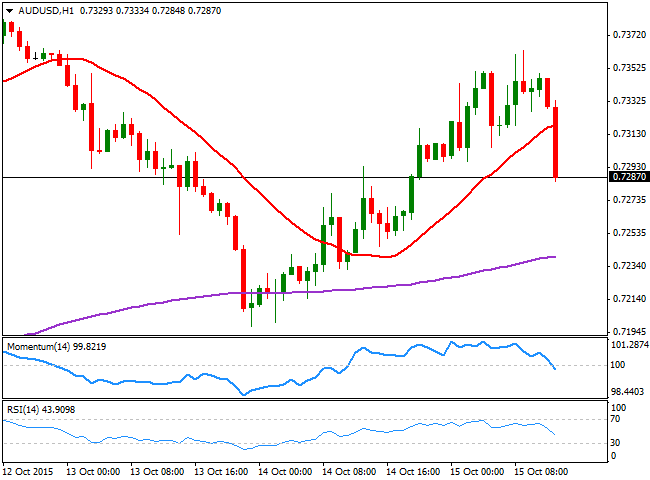 The Australian dollar continued recovering ground early Thursday, rallying against the greenback up to 0.7363, after mixed employment data. According to the latest release, Australian unemployment rate dropped to 6.2%, as the participation rate decreased to 64.9%. Employment fell 5,100 from August compared with a median forecast of a 9,600 increase. Also, inflation expectations rose in October, to 3.5% from previous 3.2%. Better-than-expected US data however, has sent the pair to a fresh daily low below the 0.7300 level, turning the short term picture strongly bearish, as the price is accelerating below its 20 SMA, whilst the technical indicators are in line with further declines after breaking below their mid-lines. In the 4 hours chart, the technical readings also favor the downside, with further declines seen on a break below 0.7250.