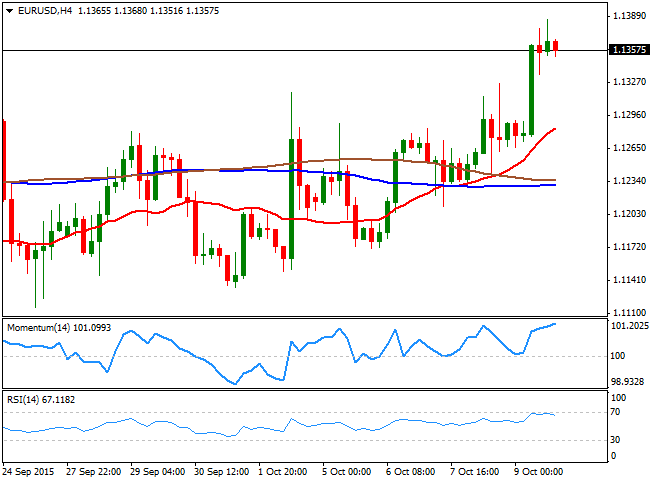 The American dollar closed the week broadly lower against most of its majors rivals, in a week characterized by dovish Central Banks. Both, the ECB and the FED in the minutes of their latest meetings, expressed their concerns over the global economic inflation, and the low inflation levels. The US Central Bank, said that the labor market had "improved considerably," but the meeting was held way before the latest disappointing US Nonfarm Payroll report.  During the upcoming days, most of the major economies will release its September inflation readings, which may determinate if the ongoing dollar's weakness is set to extend.

In the meantime, the EUR/USD pair rose up to 1.1386 last Friday, ending at its highest in 6 weeks, at 1.1357 and maintaining a positive tone. However, and from a technical point of view, the pair is not yet able to confirm a bullish continuation, given that the top of these last few months' range stands at 1.1460, disregarding the Black Monday spike up to 1.1713. With the pair trading 100 pips below the critical resistance, the daily chart shows that, despite the price is above its moving averages, the indicators lack directional strength and remain horizontal. In the same chart, the RSI indicator presents a bullish slope around 60, whilst the Momentum indicator has lost its upward strength, but holds above its mid-line, all of which supports additional gains for this Monday. In the 4 hours chart, the 20 SMA maintains a bullish slope well below the current level, whilst the technical indicators have lost their upward strength, but hold near overbought levels. The pair needs now to advance beyond 1.1426, to test the critical resistance area around 1.1460, with a break above it, confirming a bullish continuation during the upcoming sessions. 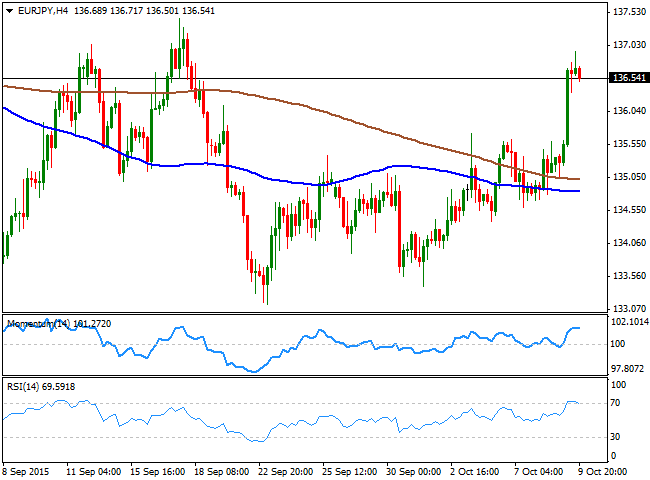 The EUR/JPY edged higher on Friday and flirted with the 137.00 level before closing the week at 136.54, and above its 100 DMA for the first time since mid September. The pair however, lacks a clear directional strength, pretty much since last May, and the range keeps shrinking as the price approaches the vortex of a huge triangle, clear in the daily chart. In it, the technical indicators stand well above their mid-lines, albeit the Momentum has partially lost its upward strength, whilst the 200 DMA offers a strong dynamic support in the 134.40 price zone. Shorter term, the 4 hours chart shows that the price is well above its moving averages that anyway maintain their tepid bearish slopes, whilst the technical indicators are beginning to look exhausted in overbought territory, supporting a bearish correction on a break below 136.30, the immediate support.  The daily descendant trend line that comes from June high at 140.99, stands these days around 137.70, also a strong static resistance level, and it will likely attract selling interest if reached this Monday. 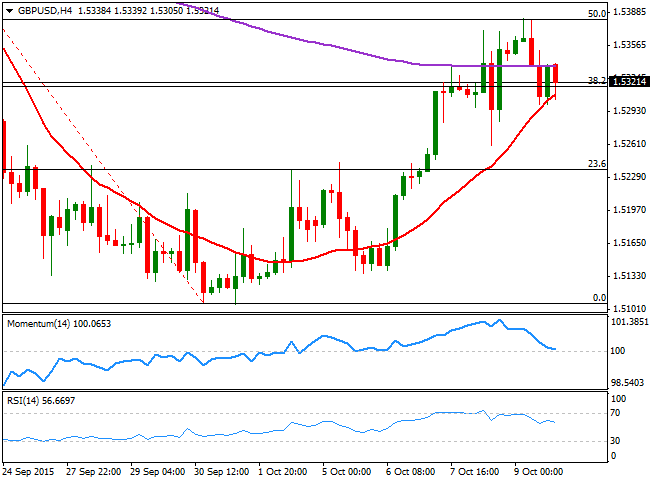 Pound's weekly rally was interrupted last Friday, following the release of the UK trade balance data. The GBP/USD pair rose up to 1.5382, finding a strong resistance at the 50% retracement of its latest daily decline between 1.5657 and 1.5196. After a short period of consolidation, the pair retreated down to 1.5299, but managed to close the week with solid gains around 1.5320. During this week, the UK will release its employment and inflation figures for September, and readings above expected should lead to another leg higher in the pair, with the market no targeting 1.5445, the 61.8% retracement of the mentioned rally. Daily basis, the price has managed to hold above its 20 SMA, but the moving average maintains a strong bearish slope. The technical indicators in the same time frame, have lost their upward strength right after crossing their mid-lines, which at this point, limits chances of a stronger rally. In the 4 hours chart the price is struggling to overcome its 200 EMA, whilst the 20 SMA maintains a strong bullish slope a handful of pips below the current level, and the technical indicators head lower around their mid-lines, increasing chances of a downward move on a break below 1.5300.

The USD/JPY pair has extended its limited range for one more week, still glued to 120.00 price zone, and with no aims to break it according in the nearer term. By the ends of October, the FED and the BOJ will have economic policy meetings, in which the last will review its forecast and economic conditions, and there's some speculation pointing for an extension of Japanese monetary stimulus by then. But in the meantime, the range set late August between 118.65 and 121.35 will likely prevail. Technically, the daily chart shows that the price has continued developing well below the 200 DMA that converges with the main resistance and top of the range a 121.35, whilst the 100 DMA extended its decline above this last. In the same chart, the technical indicators are still lacking directional strength around their mid-lines, maintaining the neutral stance. In the short term the 4 hours chart shows that the price is around its moving averages, whist the technical indicators are also neutral, with a tepid bearish slope right above their mid-lines. 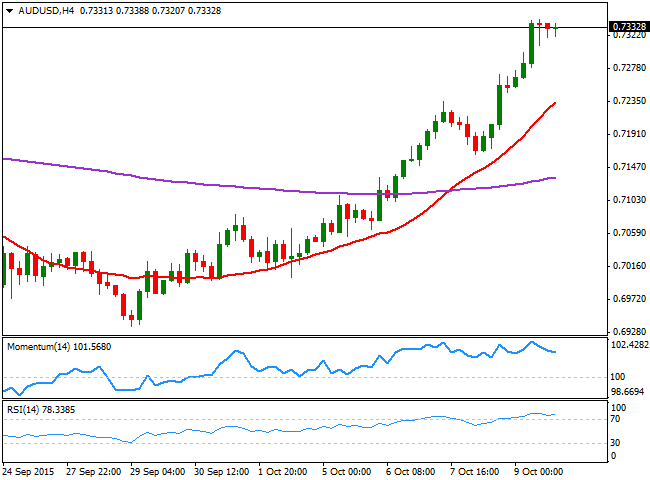 The AUD/USD pair has closed at its highest since late August, closing its ninth day in-a-row with gains last Friday at 0.7332. The strong recovery in the Aussie was supported by commodities' recovery, as particularly oil and gold seem to have set interim bottoms, and rose to multi-month highs on hopes the FED will remain on hold until 2016. The risk of a downward corrective in the AUD/USD pair has increased exponentially, and there's a good chance the pair may correct lower during this week, particularly if Australian employment data disappoint. Also, China will release its inflation figures for September these days, which if negative, may hit the Aussie as the risk of slowing economic conditions in the region remain intact. Technically, however, the daily chart maintains a strong upward momentum, given that the technical indicators continue heading sharply higher, despite entering overbought territory. The 20 SMA in the mentioned time frame, has gained a tepid bullish slope around 0.7100, not actually significant at the time being. In the 4 hours chart, the technical indicators are barely losing strength in extreme overbought territory, whilst the 20 SMA accelerated its advance below the current price and stands now around 0.7240. The pair can correct down to 0.7110 without really losing its longer term upward potential, yet a break below this last should open doors for additional decline, back below the 0.7000 figure.