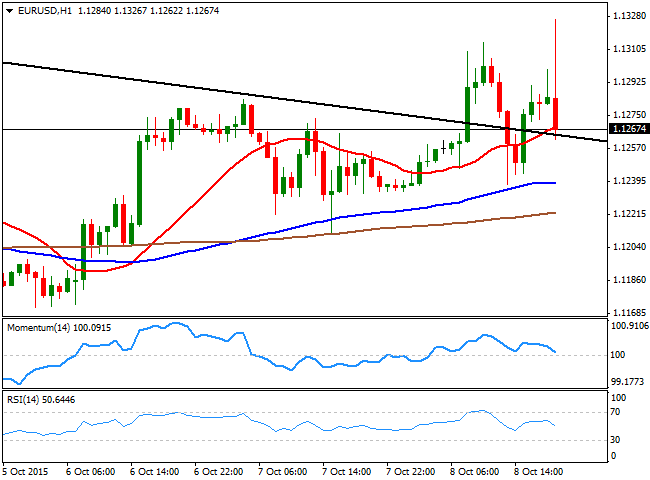 Central Banks led the way this Thursday, resulting in a continued decline in the greenback towards fresh weekly lows against most of its rivals. During the European session, the  ECB Account of the monetary policy meeting offered a generally dovish tone, with the European Central Bank seeing the downward risk for inflation increasing, and reasserting the full implementation of QE until September 2016 or beyond. Officers were also concerned over the slowdown in emerging markets weighing in global growth, whilst they reckon that the local recovery has been weaker than previously expected. The EUR/USD pair retreated from its session high around 1.1314, and fell down to 1.1237, from where it slowly recovered ahead of the FOMC Minutes. The US Central bank said that many members see that the conditions for a liftoff can be met this year, and pledged for a hike before the year end. They also expressed their concerns about low inflation levels, and  the economic slowdown in emerging markets. The meeting was held before the latest awful payroll, and market is understanding that the latest developments will keep the FED on hold.

The EUR/USD pair broke higher and extended up to 1.1326, but failed to sustain gains above the 1.1300 level, and fell back below the 1.1280 level, putting in doubt any additional gains in the common currency. Despite being above the daily descendant trend line coming from 1.1713, the short term picture is far from bullish as the 1 hour chart shows that the technical indicators turned lower in positive territory, whilst the 20 SMA offers an immediate support in the 1.1260 region. In the 4 hours chart, the technical indicators are also turning south above their mid-lines, , whilst the price is now well above its moving averages, that anyway lack directional strength . As long as the price holds above the 1.1250 level, the downside seems limited, yet a break below it should be pretty discouraging for bulls, and anticipate some further intraday declines for this Friday. 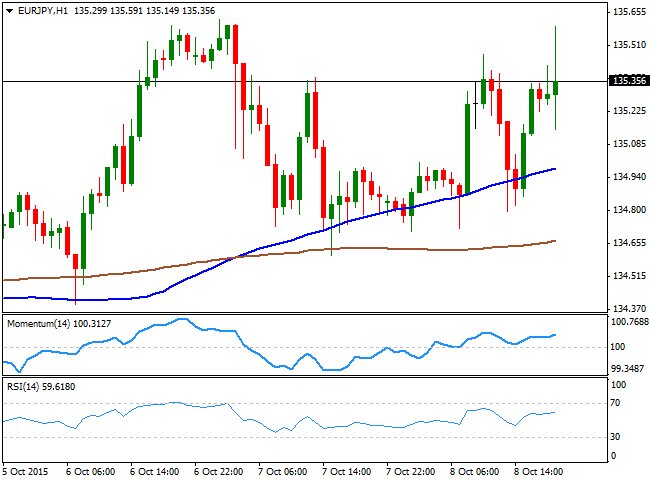 The EUR/JPY pair traded higher in range this Thursday, up to 135.59 in the American afternoon, before easing some amid an overall weak EUR. The Japanese yen had no life of its own for most of this week, and despite the lack of EUR demand, the pair has a mild bullish tone in the short term, as the 1 hour chart shows that it has met buying interest on declines towards the 100 SMA, currently heading higher around 135.00, whilst the technical indicators hold in positive territory, although lacking directional strength. In the 4 hours chart, the price is a handful of pips above its 100 and 200 SMAs that anyway present bearish slopes, whilst the Momentum indicator turned lower above its 100 level and the RSI aims slightly higher around 58, failing to signal a steady continuation for the upcoming session. 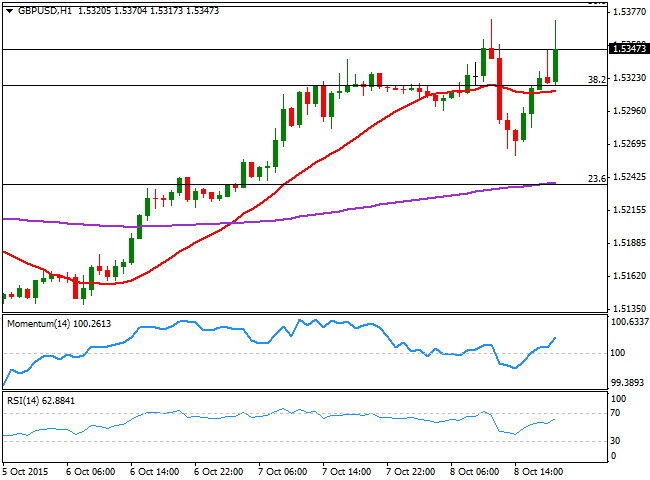 The British Pound advanced to a fresh 4-week high against the greenback  of 1.5371 during the European morning, retreating from it after the BOE's monthly economic policy meeting. The Bank of England maintained its economic policy unchanged as largely expected, while MPC officers voted again 1-8. Also, officers expressed their concerns over the strength of the currency, and downgraded its inflation expectations, now seen below 1% until 2016 spring. Alongside with the release of US Federal Reserve's Minutes, BOE's Governor Carney hit the wires, saying that there is not a certain timing for a rate hike in the UK, but the decision will come into sharper relief around year end. He added that the timing of a FED move is not decisive for the BOE. The GBP/USD recovered up to the mentioned daily high after being as low as 1.5260 early in the US session, and the 1 hour chart shows that the price is well above its 20 SMA and that the technical indicators head sharply higher above their mid-lines. In the 4 hours chart, the price is still struggling to overcome its 200 EMA, but the technical readings are generally bullish supporting additional gains particularly on a break above 1.5385, the 50% retracement of the latest daily decline. 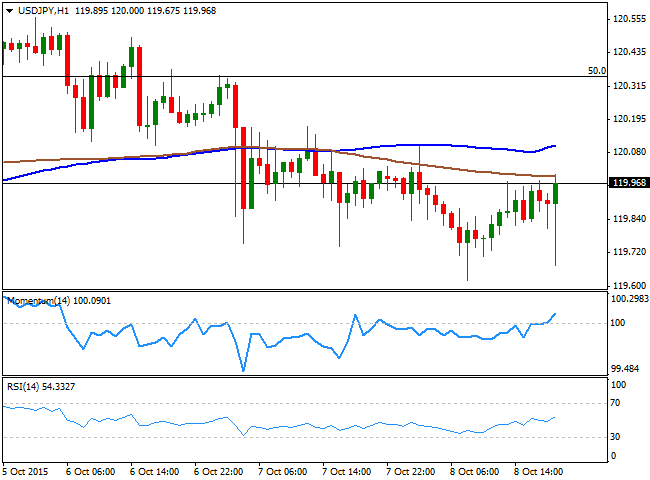 The USD/JPY pair remains glued to the 120.00 region, having been as low as 119.62 earlier in the day. Trading in range, the pair initially fell after the FOMC Minutes' release, but quickly bounced following a strong advance in commodities and stocks. The pair however, was unable to advance beyond the 120.00 level and the 1 hour chart shows that the price is below its 100 and 200 SMAs, whilst the technical indicators are barely aiming higher around their mid-lines. In the 4 hours chart, the downside is favored given that the price is below its moving averages, whilst the technical indicators present slight bearish slopes below their mid-lines. The key support comes at 119.35, the 38.2% retracement of the latest weekly decline, with  a break below it required to confirm a steadier decline towards the base of the latest range in the 118.50 region. 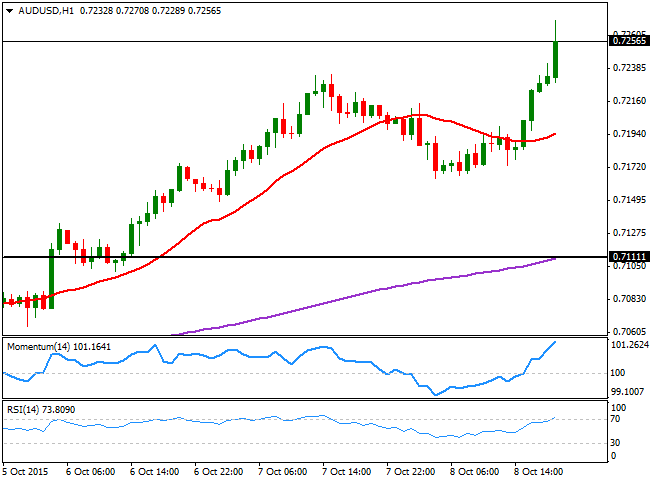 The AUD/USD rose to its highest level since mid September, reaching 0.7270 in the American afternoon, and holding nearby ahead of the close. Commodities surged following the release of the FED's Minutes, although gold retreated quickly from above $1,150 a troy ounce. As for the AUD/USD pair, the 1 hour chart shows that the technical indicators head higher, despite being in extreme overbought territory, whilst the 20 SMA turned higher around the 0.7200 level. In the 4 hours chart, the pair is clearly bullish, with the technical indicators losing their upward strength, but holding in overbought territory, whilst the 20 SMA maintains a sharp bullish slope well below the current price, and having crossed above the 200 EMA. September high stands at 0.7279, which means that a break above it is required to confirm a new leg higher towards the 0.7400 figure  for this Friday.