The American dollar is in trouble this Wednesday, down against all of its major rivals. The common currency however, has been reluctant to extend its rally, with the EUR/USD pair having retreated from a daily high of 1.1283 amid poor German Industrial Production reading for August, down 1.2% monthly basis. The pair has bounced however from a daily low of 1.1221, but is still limited by selling interest around the daily descendant trend line coming from 1.1713. Technically, the 1 hour chart shows that the price is also unable to settle above a flat 20 SMA, whilst the technical indicators are turning south after failing to overcome their mid-lines. In the 4 hours chart, the technical indicators maintain the neutral stance seen on previous updates, although the price is above a now bullish 20 SMA that should keep the downside limited during the upcoming hours. 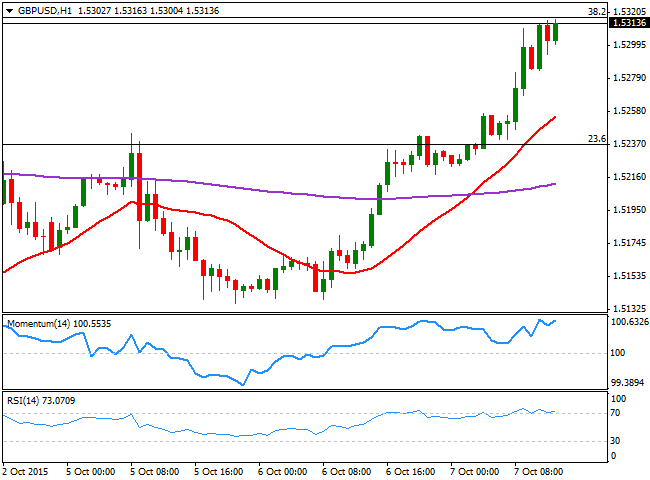 The British Pound surged to a fresh 2-week high against its American rival during the European session, boosted by strong manufacturing and industrial production figures, which reversed the previous negative tone in August. The pair's advance reached 1.5315, the 38.2% retracement of its latest daily decline, before the US opening, and consolidates a bunch of pips below it, presenting a strong upward tone in the 1 hour chart, as the technical indicators maintain their bullish slopes, despite being in overbought territory. In the 4 hours chart, the RSI indicator has lost its upward strength in overbought territory, whilst the Momentum indicator also lacks directional strength well above its mid-lines. Should the price accelerate above the mentioned Fibonacci resistance, the advance can extend up to 1.5360, en route to the 1.5400 figure. 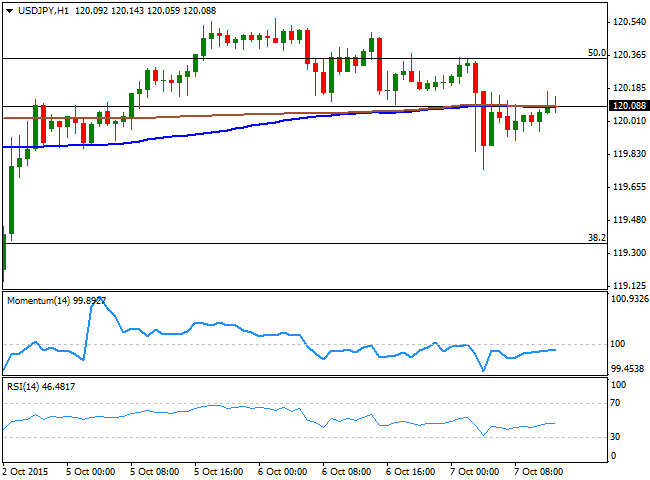 Lower on BOJ's on-hold stance. Pretty much as expected, the Bank of Japan economic policy meeting of this October 7th passed with no changes, and the Japanese yen appreciated afterwards, despite risk appetite prevailed among stocks' traders. The USD/JPY pair fell down to 119.75 intraday, but recovered back above the 120.00 level, where is now consolidating with a  pretty neutral technical stance, both short and long term. The 1 hour chart shows that the technical indicators recovered from oversold levels, but turned flat below their mid-lines, whilst the price is stuck around the 100 and 200 SMAs, both converging with the current price. In the 4 hours chart, the price is a handful of pips below its moving averages, while the technical indicators are also flat around their mid-lines. Given that stocks in Europe and America present a positive tone, the downside in the pair seems limited, with the immediate resistance now at 120.35, followed later by the 120.70 price zone. 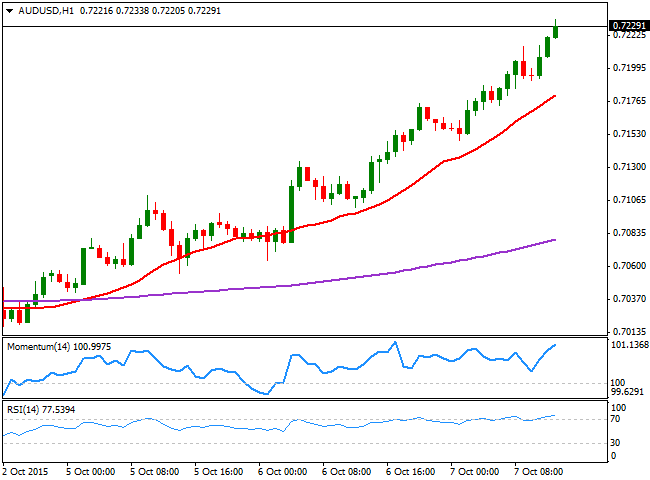 The AUD/USD pair surged to a fresh 3-week high where its stands, well above the 0.7200 level, with the Aussie finding support in the continued advance in commodities' prices. The pair seems overbought short term, although there is no technical signal of exhaustion, as the 1 hour chart shows that the price continues advancing above a bullish 20 SMA, whilst the technical indicators maintain their bullish slopes,  despite being in overbought territory. In the 4 hours chart, the 20 SMA accelerated its advance and it's about to cross above the 200 EMA around 0.7110, while the technical indicators maintain their strong bullish slopes in extreme overbought territory.