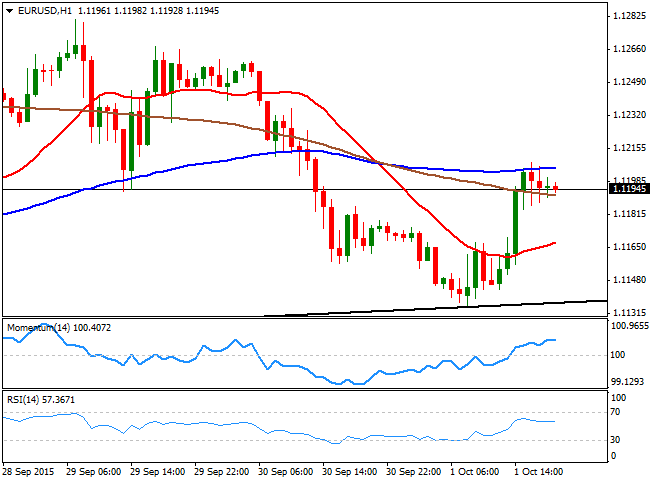 Investors continued trading on sentiment this Thursday, and stocks led the way for FX traders. At the beginning of the day, Chinese manufacturing data for September were largely steady from the previous month, as the government's official gauge of manufacturing activity improved to 49.8 from August 47.9, while the Markit PMI fell to a fresh over six years low of 47.2 from a previous 47.3, although  above previous estimate of 47. Asian share markets closed in the green, sending the EUR/USD pair down to 1.1134. In Europe, the release of the local PMIs showed also a soft picture, with the German manufacturing PMI for September falling down to 52.3 from previous 52.5, while the French reading held above the 50.0 level. The region final reading came as expected at 52. European stocks halted their initial rally after the news, favoring a recovery in the common currency, and extended their declines after Wall Street opening, as US data released through the session was quite poor, with the weekly unemployment claims rising to 277K and the ISM manufacturing PMI falling down to 50.2 from previous 51.1.

The EUR/USD pair advanced up to 1.1206 before pulling back some, consolidating nearby by the end of the day, as investors entered in wait-and-see mode ahead of the release of US employment data early Friday. The Nonfarm Payroll report for September is expected to show that the country added a bit above 200K new jobs in the month, whilst the unemployment rate is expected to hold steady at 5.1%. Technically, the 1 hour chart shows that the price retreated from its 100 SMA, but remains well above a bullish 20 SMA, currently around 1.1160, whilst the technical indicators are losing their upward strength, retreating from near overbought readings. In the 4 hours chart, the pair topped around a flat 20 SMA whilst the technical indicators remain flat below their mid-lines, lacking directional strength. Upcoming moves will depend purely on the result of the US employment data, although seems unlikely that the report will be enough to set a clear directional move for the upcoming sessions. 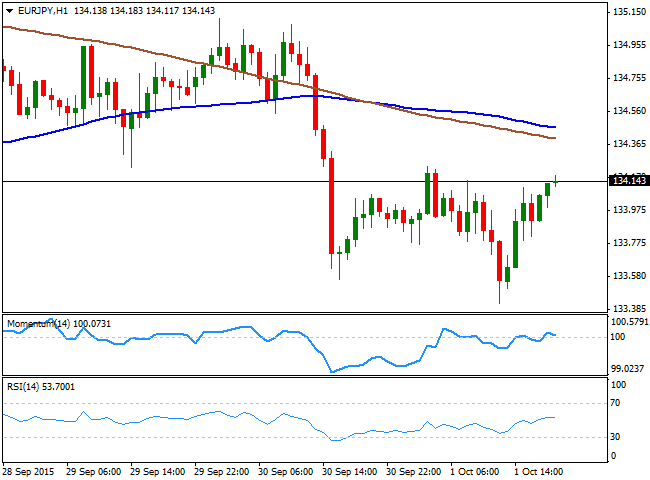 The EUR/JPY pair managed to recover above the 134.00 level after trading as low as 133.42, level reached early in the European session, as the decline in stocks resulted in some intraday JPY gains. The common currency recovery however, alongside with US stocks bouncing from their lows before the closing bell, resulted in the latest recovery in the pair that anyway is not enough to confirm additional gains, as the daily chart shows that the pair has set a lower low and a lower high, whilst the technical indicators remain in negative territory. For the upcoming hours, the 1 hour chart shows that the price remains well below its 100 and 200 SMAs, both heading lower in the 134.30/40 region and maintaining the risk towards, the downside, whilst the technical indicators are turning south around their mid-lines, far from signaling a continued upward momentum. In the 4 hours chart, the price is well below its moving averages, whilst the technical indicators turned flat in negative territory,  giving no clues on what's next for the pair. 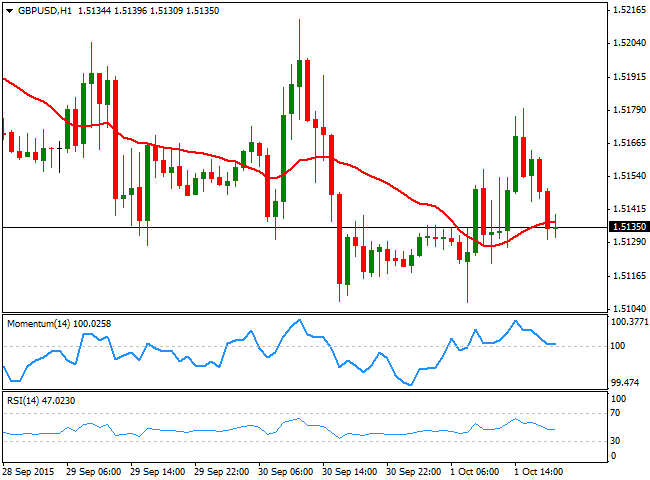 The British Pound remains under pressure, having extended its decline down to 1.5106 against the greenback, before managing to bounce back some. In the UK,  the September Markit manufacturing PMI resulted better-than-expected, printing 51.5 against market's  forecast of 51.3. The number however, is the lowest in 3 months, slightly below August reading of 51.6. Dollar's broad weakness during the American afternoon triggered a short lived rally, with the pair advancing to a daily high of 1.5179 before retreating. Closing the day barely in the green, the pair maintains a neutral-to-bearish technical stance, despite it has been falling steadily for over two weeks and the movement seems overdone. In the 1 hour chart, the price is now around its 20 SMA, whilst the technical indicators are once again around their mid-lines, giving no clear directional clues. In the 4 hours chart, the pair is still unable to clearly bearish above a bearish 20 SMA, whilst the technical indicators present tepid bearish slopes after failing to advance beyond their mid-lines. 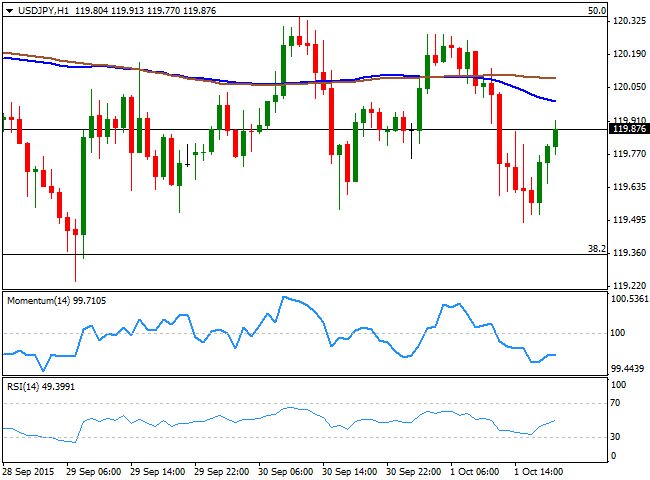 After quite a choppy trading day, the USD/JPY pair ends pretty much where it started a few pips below the 120.00 level, having extended its September´s range at the beginning of this month. In Japan, the Tankan survey was mixed, as business sentiment fell for the first time this year among large manufacturers down to 12 while non-manufacturers sentiment inched higher to 19. The 1 hour chart shows that the 100 SMA is gaining bearish strength above the current level, whilst the technical indicators have corrected their oversold readings, but remain in negative territory, increasing the risk of another leg lower. In the 4 hours chart, the technical picture remains neutral as on previous updates, with the price contained between Fibonacci levels and below its 100 and 200 SMAs, the Momentum indicator stuck around its 100 level, and the RSI hovering in negative territory, currently around 48. The pair may finally break its range with the US Nonfarm Payroll release, but the reading has to be a huge surprise, either positive or negative, to be able to take the pair out it. 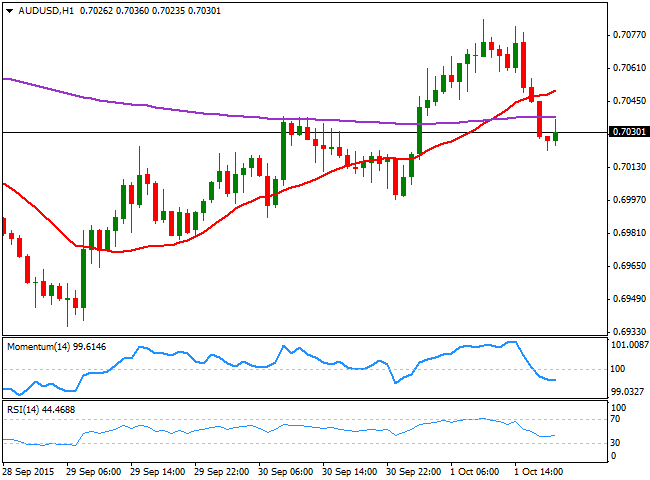 The Aussie advanced for a third day in-a-row against the greenback, with the pair having reached a daily high of 0.7083 before retreating to the current 0.7030 region. The pair rallied on the back of an improved sentiment at the beginning of the day that sent stocks higher in Asia, but the rally faded alongside with stocks afterwards. Technically, and despite the pair holds above the 0.7000 level, the risk has turned back towards the downside, as the 1 hour chart shows that the price is well below a still bullish 20 SMA, whilst the technical indicators are losing bearish momentum, but remain well below their mid-lines. In the 4 hours chart, the technical indicators have turned sharply lower from near overbought territory, and are getting closer to cross their mid-lines towards the downside, whilst the 20 SMA remains horizontal around 0.7000, providing an immediate short term support.