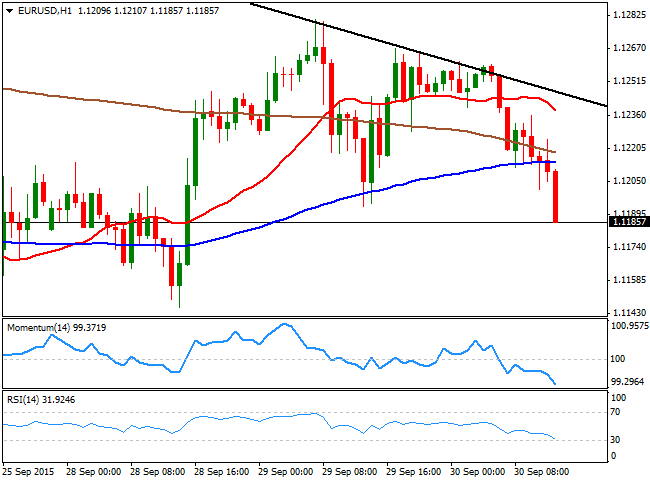 The EUR/USD pair maintains the  range this Wednesday, hovering around the 1.1200 level, and with the upside limited due to a strong recovery in the Asian and European equities. Macroeconomic news coming from Europe showed that the EU inflation fell into negative territory in September, printing -0.1% from a year before, which triggered speculation the ECB may need to add additional QE. Also, unemployment ticked higher in the EU and Germany, which adds to the EUR's bearish case. Ahead of the US opening, the US released the ADP employment private survey, showing that the sector added 200K new jobs in September, from a previously revised 186K, giving the greenback a short term boost.

The EUR/USD pair extends its decline below the 1.1200 figure ahead of the US opening, and the 1 hour chart shows that the price is accelerating below its moving averages, whilst the technical indicators present strong bearish slopes below their mid-lines. In the 4 hours chart the price is accelerating below its 20 SMA, the Momentum indicator holds flat around 100 whilst the RSI heads lower around 43, all of which supports additional short term declines. The immediate support comes at 1.1160, with a break below it exposing 1.1120 a strong static support. 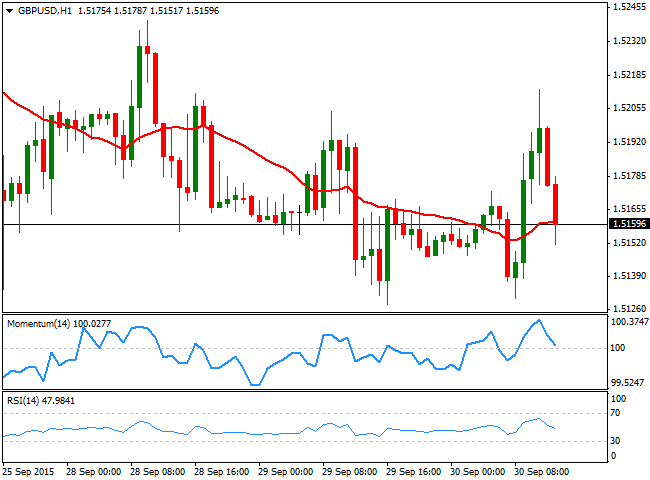 The GBP/USD pair advanced up to 1.5213 after the release of UK positive data, but once again failed to sustain gains beyond the 1.5200 figure, and retreated below the level. In the UK Q2 GDP final revision came out as expected at 0.7%, and the economy grew at an annual pace of 2.4%, slightly below the 2.6% expected. The current account deficit however, narrowed to  £16.8B from a downwardly-revised £24B in Q1. The pair trades pretty much neutral daily basis, hovering around the 1.5150/60 region after the release of the US ADP survey. Technically the 1 hour chart shows that the price is around a directionless 20 SMA, whilst the technical indicators turned south and are about to cross their mid-lines towards the downside, not yet providing a downward continuation signal. In the 4 hours chart, the pair maintains its neutral-to-bearish stance, with a break below 1.5130 required to confirm additional declines. 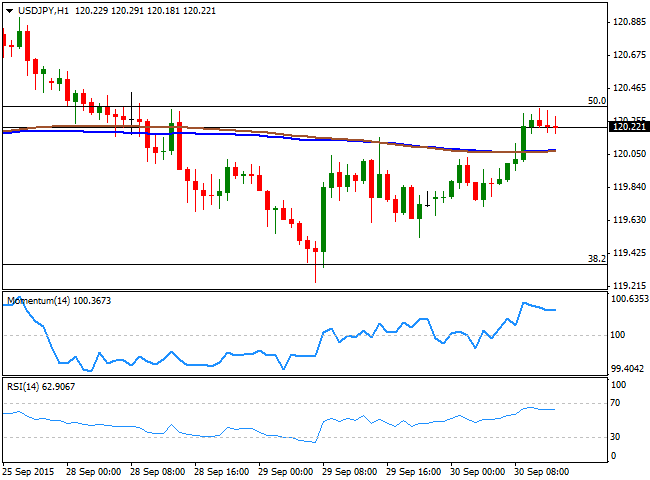 The USD/JPY pair surged to a daily high of 120.34 after the European opening, retreating from it ahead of the US opening, even despite the US ADP survey beat expectations by printing 200K for September. Investors are not quite sure on how to take the news, as US futures were trading strongly higher before it, but seem now to be hesitating on growing speculation the FED may pull the trigger this October. From a technical point of view, the USD/JPY continues respecting its usual range by the pip, retracing from the 50% retracement of its latest weekly decline. Short term, the 1 hour chart shows that the 100 and 200 SMAs converge around 120.00 a clear sign of the lack of directional strength, whilst the technical indicators are turning lower after nearing overbought territory. In the 4 hours chart, the technical indicators maintain its neutral stance, stuck around their mid-lines, as well as the 100 SMA, a few pips below the mentioned Fibonacci resistance. 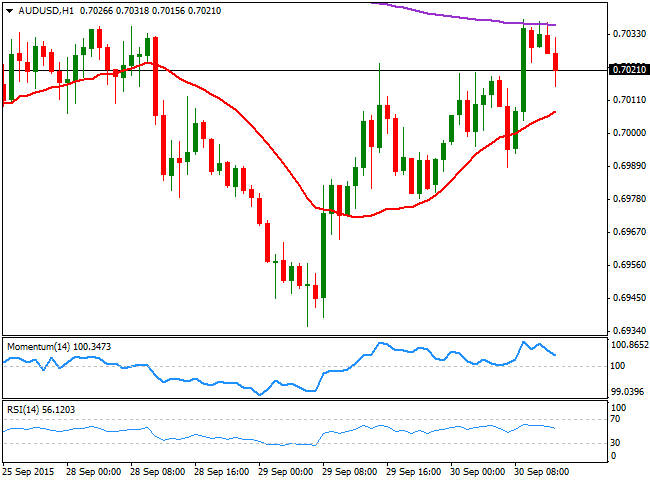 The AUD/USD pair recovered above the 0.7000 level as risk aversion eased, reaching a daily high of 0.7037 before stalling. Nevertheless, the pair consolidates near is daily high, although the technical indicators in the 1 hour chart have turned after approaching overbought levels, suggesting a limited upward potential ahead. In the same chart, the 20 SMA heads higher below the current level, providing and immediate short term support around 0.7000. In the 4 hours chart, the technical indicators remain attached to their mid-lines, whilst the price is a few pips above a flat 20 SMA, failing to provide clear directional signs.