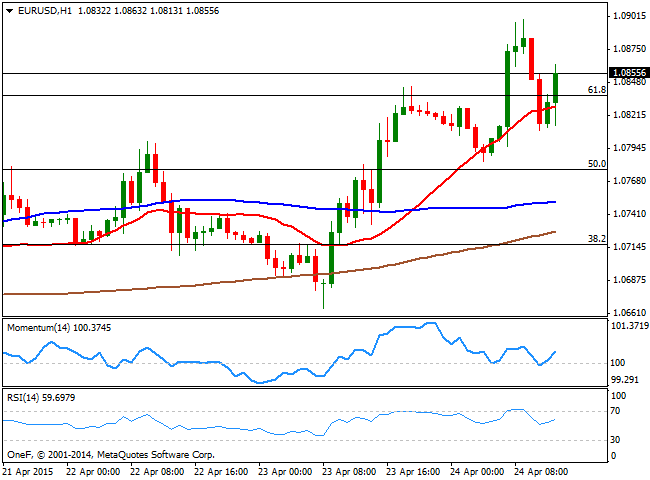 The EUR/USD surged to a daily high of 1.0899 on hopes Greece was about to reach a deal with its creditors, only to sunk down to 1.0809 on the back of EU officers reviling Greek Finance Minister Yanis Varoufakis. European ministers seem to be outraged by Varoufakis having failed to deliver once again, a serious list of economic reforms, and was accused to be an amateur, according with "a person familiar to the conversations." Spain minister De Guindos claimed that no substantial progress was made on Greece, and that was the only  official comment I was able to find so far. Anyway, earlier in the day, German IFO survey showed local confidence improved more than expected in April, with the Business Climate up to 108.60. In the US, Durable Goods Orders in March surged 4.0%, reversing previous month decline, albeit the core reading disappointed, down -0.2%. Worse than expected US data helped the EUR/USD pair recover above 1.0840, the 61.8% retracement of its latest daily decline.

Technically, the 1 hour chart shows that the price stands above its 20 SMA whilst the technical indicators bounced from their mid-lines and maintain a bullish slope. In the 4 hours chart  the technical indicators hold above their mid-lines albeit lack directional strength, whilst the price stands well above its moving averages in the 1.0740/60 region. If the pair manages to hold above 1.0845, chances are of an advance towards the 1.0900 figure, whilst a break below 1.0800 exposes it to a continued decline towards the 1.0740/60 price zone. 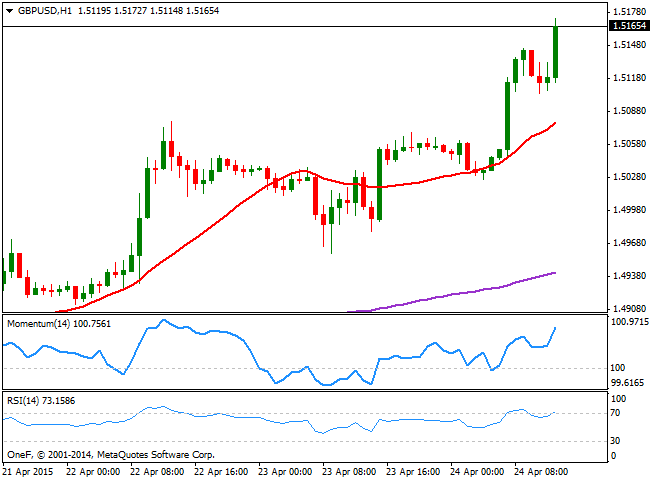 The GBP/USD pair traded as high as 1.5145, a fresh 1-month high in the European morning, boosted by market's optimism. Having found buyers on retracements towards the 1.5100 region, the pair accelerates north after tepid US data and trades at levels not seen since early March above 1.5160. The 1 hour chart shows that following a limited correction from overbought levels, the technical indicators are heading strongly north in overbought levels whilst the price extends further above its 20 SMA. In the 4 hours chart the technical indicators also head strongly north in overbought territory, with scope now to test the 1.5200 figure, should dollar decline extends. 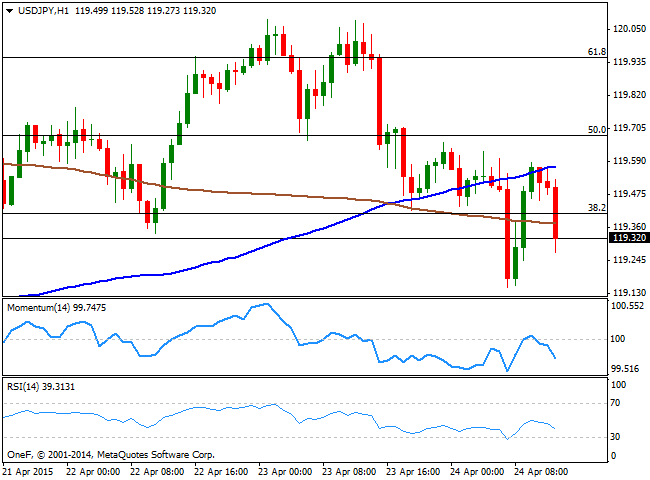 The USD/JPY recovered from a daily low of 119.14 reached during the past Asian session, albeit retreats from a session high in the 119.60 region following poor US Durable Goods Orders. The 1 hour chat shows that the technical indicators turned sharply lower around their mid-lines, whilst the price is being rejected from its 100 SMA, all of which favors additional declines. In the 4 hours chart the price has held below its 100 SMA ever since Thursday's US session, whilst the technical indicators head slightly lower below their mid-lines, supporting the shorter term view. A break below the 119.00 figure however, is required to confirm additional declines, eyeing the 118.60 region as the next bearish target.