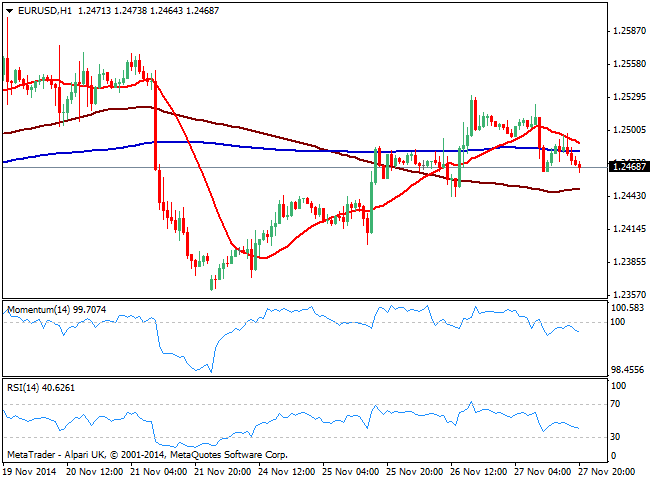 Dollar advanced on Thursday, supported by weak European readings and the OPEC that failed to reach an agreement on a cut on oil output: the black metal sunk below the $70.00 a barrel mark, helping the greenback advance across the board. As for Europe, weak German inflation readings alongside with Draghi’s comments before the Finnish Parliament, suggesting the ECB will remain on hold next week, weighted the most on the common currency, pressuring its daily low ahead of Asian opening. With the US closed on Thanksgiving holiday, trading over the afternoon has been limited, situation that will likely extend into Friday, when US stocks will have an early close.

Technically the EUR/USD 1 hour chart shows indicators heading south into negative territory, as 20 SMA gains bearish slope above current price. In the 4 hours chart price pressures its 20 SMA heading higher a few pips below current price, while indicators turned lower but hold above their midlines. The 1.2440 static support level stands in the way of further falls towards 1.2400, while sellers will likely surge on approaches to 1.2520 price zone. 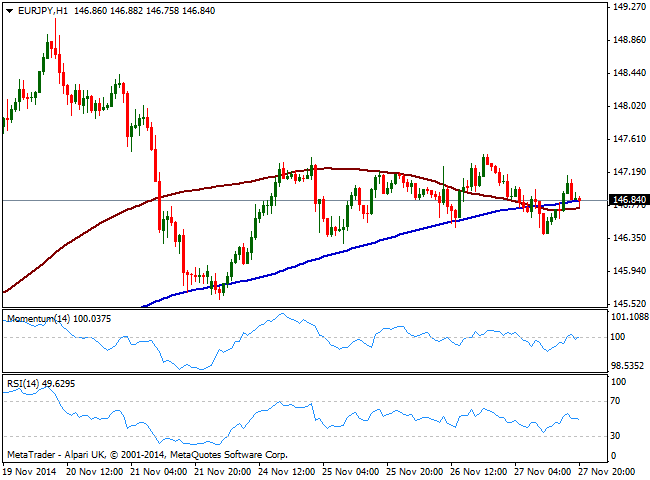 Japanese yen appreciated some against most rivals, dragging the EUR/JPY cross below the 147.00 level, albeit the pair traded range bound for most of the day, with a low established at 146.41. During upcoming Asian session, Japan will release a stack of data including inflation, employment, retail sales and industrial production figures. Main focus will be inflation, as if the reading disappoints, yen may enter once again in a selling spiral. Anyway and in the short term, the EUR/JPY presents a neutral stance, as price hovers around its 100 and 200 SMAs while indicators hover around their midlines. In the 4 hours chart 100 and 200 SMAs head higher still well below current price, but indicators are also lacking clear direction around their midlines. The 147.40 price zone has been capping the upside for four days in a row, meaning short term traders’ stops should lie above: if triggered with data, may see the pair extending above the 148.00 level during the upcoming sessions. 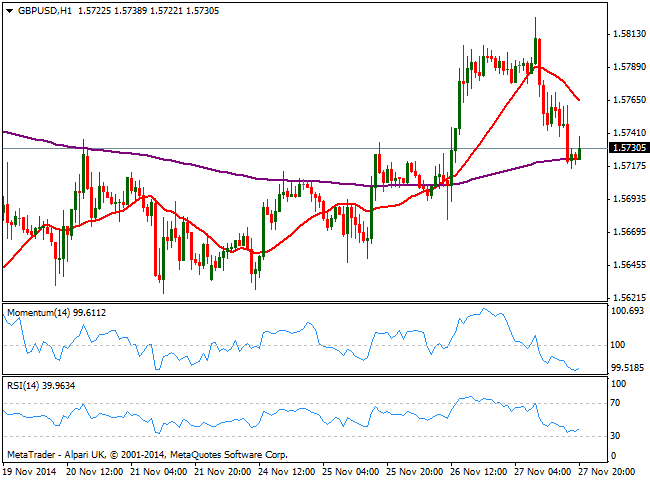 The GBP/USD pair lost the hard earned ground on Wednesday, as after posting an 11 day high of 1.5825 with the European opening felt back below the 1.5740 level where it stands. There was no catalyst coming from the UK and the calendar will also be light on Friday, with just a minor housing reading scheduled; for the most, it was dollar demand which pushed the pair back lower, based on both, Draghi and OPEC. Technically, the 1 hour chart shows price developing below a strongly bearish 20 SMA, while indicators stand well into negative territory, losing early downward momentum. In the 4 hours chart price rest above a mild bullish 20 SMA while indicators aim to recover above their midlines, all of which keeps the downside limited at least for now. A break below 1.5700 will likely trigger further declines towards 1.5660 while at this point, price needs to extend beyond 1.5825 high to reaffirm a  positive tone, something pretty unlikely for this Friday. 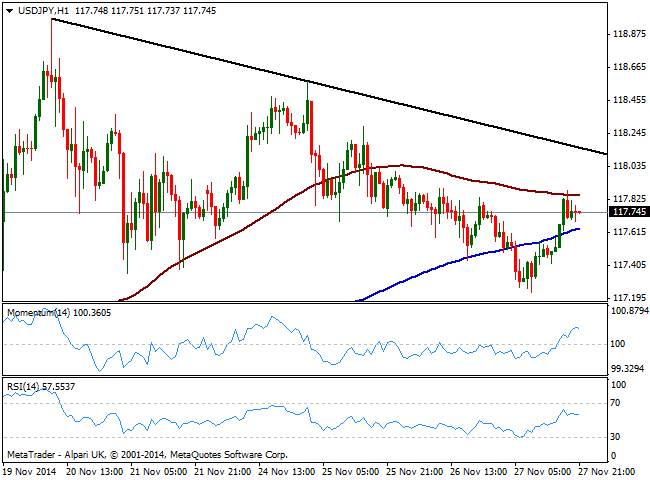 The USD/JPY closes the day pretty much unchanged, but having posted a lower low and a lower high daily basis, increasing the risk of a decline, at least from a technical point of view. Ahead of the hurdle of local data, the 1 hour chart shows price contained between 100 and 200 SMAs while indicators lost upward potential above their midlines. In the 4 hours chart, momentum retreats from its midline as RSI stands flat around 51, showing no clear bias at the time being as market players await fresh news. A dip below 117.00 should see a stronger downside extension into next week, while 117.95 continues to be the immediate critical resistance to overcome to see the bearish pressure easing in the short term. 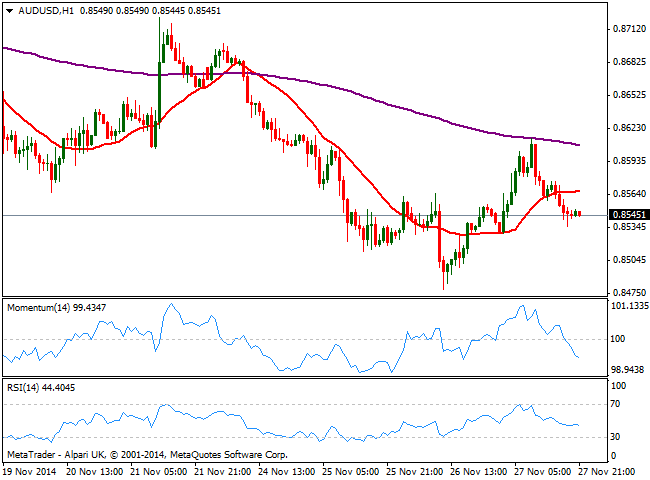 The AUD/USD pair surged during last Asian session on the back of positive Australian data, reaching a daily high of 0.8614. But sellers took their chances on the level, pushing the pair back to its mid 0.85 area, in line with the dominant trend and intraday dollar strength. The shy recovery quickly reversed left a bearish tone in the 1 hour chart, as price develops below a flat 20 SMA whilst momentum heads strongly south below 100 and RSI also heads lower around 44. In the 4 hours chart price battles below a strongly bearish 20 SMA, while indicators erased all of the oversold readings reached on Wednesday, but failed to favor the upside: momentum stalled right below 100 and RSI turns back south. The daily low stands at 0.8530 now the immediate short term support, with a break below exposing the pair to a retest of recent lows in the 0.8470 price zone.