The most influential story for the financial markets today was reports that the first US case of coronavirus from China has been confirmed. This deadly virus from China is spreading across the globe creating concerns about the impact on travel and consumer spending. There's no question that economic activity in Asia will be affected as we head into one of the busiest travel weeks in China. Often touted as the world's biggest human migration, about 3 billion trips are expected this holiday season. Unfortunately many families could decide to stay home during this seven day holiday, which would directly impact the tourism and retail industries. If the virus is not contained, the impact on consumer confidence could be significant. US stocks tumbled in direct response to these headlines driving currencies and equities sharply lower. USD/JPY experienced its largest one day decline in 2 weeks, falling below 110 and is on its way to 109.50. With no US economic reports released today, risk aversion was the primary driver of FX flow. Tomorrow's existing home sales report is not expected to provide much support to the greenback. US equities and USD/JPY are destined for more near term losses.

Meanwhile for the past 2 weeks USD/CAD has been trading in a very tight 40 to 50 pip range. The Canadian dollar is prime for a breakout that could happen in the next 24 hours. Not only will Canada release its latest inflation report but the Bank of Canada has a monetary policy announcement that will be accompanied by a press conference with Governor Poloz. The last time the BoC met they sent the Canadian dollar soaring as they talked about the resilience of consumers and stabilization in the global economy. Since then, we've seen widespread weakness in Canada's economy from consumer spending to the housing market, GDP, trade and manufacturing. The latest CPI numbers will be released before the rate decision and according to IVEY PMI, prices fell sharply last month. USD/CAD is already beginning to trend higher on risk aversion so if the central bank sounds more cautious, we could see a major upside breakout that takes the pair well above 1.31. However if they remain optimistic and downplay the recent weakness shown in the table below, the Canadian dollar will soar not only against the greenback but all major currencies. 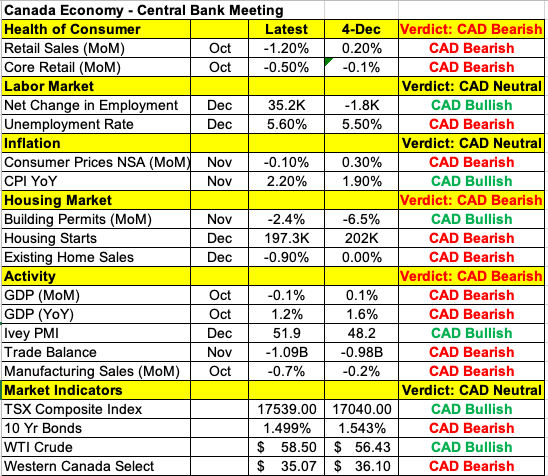 One of the best performing currencies today was sterling which held firmly above 1.30 on the back of stronger labor data. Jobless claims in December matched November. Average weekly earnings growth also held steady at 3.2% instead of slowing as economists anticipated. Unfortunately the much better than expected German ZEW survey failed to lend support to euro. The Australian dollar was hit the hardest by risk aversion on the worry that Australia's economy will be crushed by the wildfires and China's Coronavirus. An Australian man returning from China has tested positive for the virus as well. Australian consumer confidence numbers are scheduled for release later this evening and there's very little reason to expect an improvement.