Skip to main content
;
The US Federal Reserve is having its monthly economic policy meeting this Wednesday, but chances of having some action are pretty much null. There's no press conference scheduled for after the event, whilst the FED will neither deliver projections for inflation or growth.

Of course, at the beginning of the year, FED's head, Janet Yellen, warned that they could rise rates in any meeting, including those with no press conference scheduled. But the October meeting will hardly be the case, as they had their chance last month, and passed. The best the market can anticipate these days, is a December lift off.

Additionally, no significant changes in the FOMC statement are expected, besides that maybe the FED will acknowledge the latest soft employment figures, but remaining confident on the sector's growth. Chinese slowdown, and weaker oil prices, will likely have their chapters too, as usual.

Anyway, with the market focused on December, a no-change in the previous wording will likely be seen as dollar positive, as hopes for a rate move before the year-end will remain high. On contrary, a downward surprise with renewed concerns over the dollar's strength, or references to poor economic developments, will result in investors running to price in a delay for next 2016, and therefore sent the USD lower across the board. Also, investors may be looking at the post-meeting commentaries from some of the FOMC officials, for some clues on whether they will actually rise rates.

Market's reactions are expected to be limited, except of course, in the case of a surprise rate hike. That would be a market shocker that can send the greenback running hundred of pips across the board. But as said before, there are the fewest probabilities ever, of such happening tomorrow. 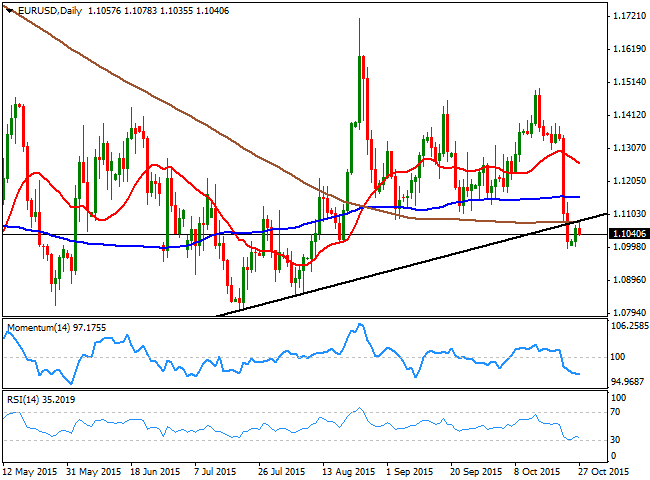 As long as a rate hike remains on the cards, EUR/USD gains will be limited, as Draghi has clearly warned the markets that it will act in December if needed, pretty much saying that if the FED does not raise rates, he will extend facilities in Europe to keep the EUR lower. The pair has been holding above the 1.1000 figure ever since the week started, but the daily chart shows that the bearish tone prevails, given that the pair is unable to recover above the long term ascendant trend line broken last week, and even completed a pullback to it this Tuesday before turning back south. Additionally, the pair is trading back below its 100 and 200 SMAs, while the technical indicators seem ready to resume their declines well into negative territory. The RSI particularly, has corrected its oversold conditions and heads back south around 34, all of which supports additional declines.  The main supports below 1.1000 come at 1.0960 and 1.0920, while below this last, the base of these last months' range at 1.0840 is next. The pair needs to recover above 1.1120 to see some upward constructive tone, with 1.1160 and 1.1200 as the next levels to watch post FED. 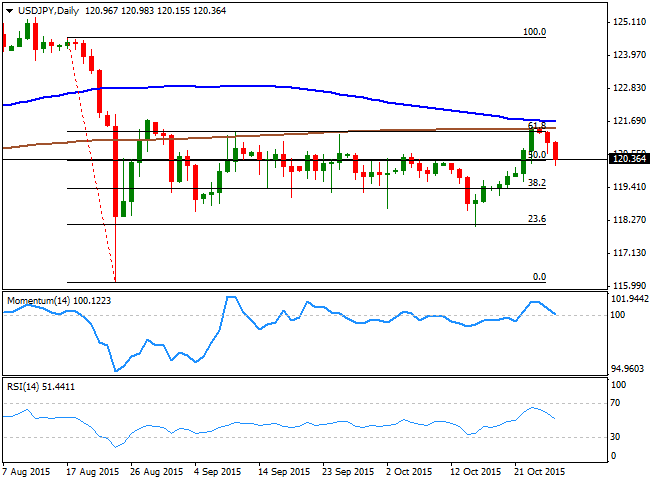 The USD/JPY is back to its comfort zone around 120.35, the level that has acted like a  magnet for the past two months. The BOJ will have its monthly economic policy meeting after the FED, early Friday, and speculation has mounted over the possibility of an extension of the ongoing stimulus in Japan, the main reason behind the latest recovery in the pair. It could be that with a on-hold FED, with no change in the wording, the pair will trade around the current level until the Bank of Japan meeting. Anyway, and ahead of the FED, a dovish US Central Bank may send the pair down to 119.30, a strong Fibonacci support, while further declines below this last can see the price extending down to 118.55. To the upside, 120.70 is the immediate resistance, followed by the 121.45 level, the 200 DMA and the level sellers have defended ever since late August.