With quite limited volumes across the forex board, investors are placing their hopes, partially, in the ECB monthly economic policy decision, to be unveiled this Thursday. Partially, because there are more Central Banks' decisions coming before the month ends. Both, the FED and the BOJ will have their economic policy meetings, with the first expected to remain on hold, but with increasing chances of a move coming from Japan authorities.

The fact is that besides the usual dovish stance, the European Central Bank is expected  to offer little to the market these days.  Despite some market talks of a QE extension during the past weeks, Mario Draghi is largely expected to maintain the bond buying program launched in January, unchanged. If something, he will try to down talk the common currency, as the EUR/USD pair has returned to pre-QE levels, and therefore limiting local exports.

Adding to the local situation, Chinese economic slowdown continues worsening, with the latest GDP reading in the country falling down to levels not seen in over six years, whilst oil prices remain subdued. Low inflation is being also blamed on the continued slide in oil prices by almost all central bankers, but sometimes seems more as an excuse than a cause.

With the dollar having lost its shine amid a continued delay from the FED on a rate hike, the unwind of bulls in the American currency is not just a problem for the US. European stocks markets soared when stimulus was announced, as the EUR got cheaper, and exporting become more competitive. But with the year about to end, inflation is actually below zero, and stocks have gave back most of its yearly gains.

Earlier this week, Nowotny, the Austrian National Bank Governor, said that given that inflation is still far from the Central Bank's target, the ECB may need to loosen fiscal policies to boost growth, or use additional tools, fueling speculation the ECB will actually announce some measure in its upcoming meeting. But as said before, no concrete action, beyond more Draghi jawboning, is expected.

Read: What is ECB Quantitative Easing?

If the ECB decides to continue buying €60bn a month, mostly in government bonds, repeating that the program will extend until September 2016, or further if needed, the market will likely be disappointed and sell the common currency. 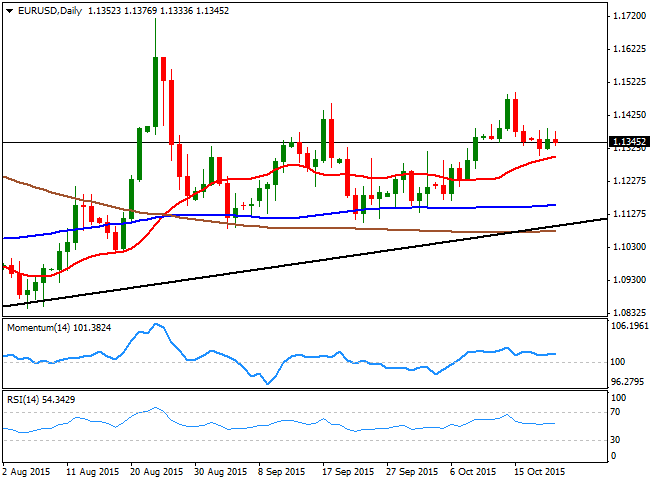 From a technical point of view, the EUR/USD pair retains a bullish tone in the daily chart, despite the ongoing absence of directional strength as the price has remained firmly above a bullish 20 SMA ever since the month started. There is a daily ascendant trend line coming from April low at 1.0519 which comes these days around 1.1120 a major static support level. Also, strong selling interest has been surging ever since early May on approaches to the 1.1460 region, dismissing the spike up to 1.1713 from late August.

So far this week, the pair has been unable to advance beyond 1.1400, which means that if somehow Draghi gives the EUR a push, the pair needs to break above it test the 1.1460 level, en route towards 1.1500, this Thursday.

The pair is far from the major support mentioned, but if the price breaks below 1.1280, the downside is favored towards the 1.1120/60 region for the upcoming sessions.

GBP/USD wavers in a 15-pip trading range above 1.3950 after Tuesday’s recovery from two-week low. UK Chancellor Rishi Sunak ready to do “whatever it takes’, with the Budget in focus. US stimulus, vaccine news and Services PMIs awaited.

EUR/USD in a consolidative mode, eyeing for a big move above 1.21. The US dollar holds the lower ground amid retreating yields and an upbeat market mood. Eurozone Services PMIs eyed ahead of the key US data flow.

Gold eyes $1755 as the next upside target

Gold (XAU/USD) is consolidating its solid recovery from multi-month troughs on Wednesday, as the upbeat market mood weighs on the traditional safe-haven. The vaccine optimism seems to have helped the risk-recovery.

Cardano has outperformed itself and many other altcoins to become the third-largest cryptocurrency in the market. The $39 billion cryptoasset is up 21% over the last seven days. It has attracted a trading volume of $6.9 billion in 24 hours.

US Dollar Index: Next on the upside comes in 91.60