Skip to main content
;
The Swiss National Bank has in the recent past shown its discomfort with Swiss francâ€™s appreciation. The SNB intervened to weaken the currency when it appreciated slightly post ECBâ€™s stimulus package announcement on 3rd December, making it evident that the SNB wants a weaker currency. This weakening will be possible, via non-artificial means, only if rates were to be slashed further.

The Swiss National Bank (SNB) at its December 10th meeting decided to maintain its expansionary monetary policy. The target range for the three-month Libor was left unchanged at between â€“1.25% and â€“0.25%, and the interest rate on sight deposits with the SNB was also kept unchanged at â€“0.75%.

Switzerland is surrounded by euro countries and thus it pays for the SNB to follow the ECBâ€™s policies closely. SNB has previously taken cue from the ECB to determine its own policies. Hence when the ECB disappointed the markets with a smaller than expected stimulus package, it was largely expected that the SNB would also not move. SNB proved the markets rights by holding rates steady. The scenario can be expected to remain largely unaltered in the coming months. 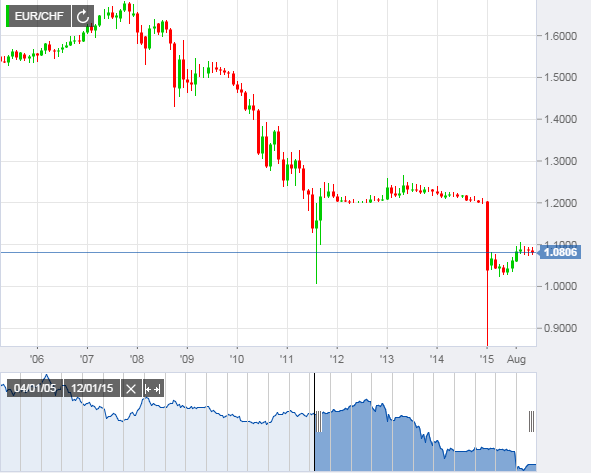 Analysts at ING rightly observed that in the immediate future, in an event of an extension of the current ECB monetary policy downward, pressure will be exerted on the CHF-EUR interest spreads. This will result in climbing tensions on the Swiss franc. Also, economic turmoil in the euro zone could result in sharp fall in the value of euro. This will in turn raise demand for safe heaven purchases leading to the appreciation of the Swiss currency. The SNB then will have to intervene and control the currency by slashing rates again.

ECB chief Mario Draghi post the December 10th meeting assured markets that the central bank will intensify the use of easing tools to bring inflation closer to target. The ECB has said that it can and will ease further to stabilize prices in the bloc. This implies that the downward pressure on rates in the euro zone will continue for a long time now. The markets can thus expect SNB interest rates to normalize only in 2017.

Inflation to overcome 1 per cent threshold only in 2018

Switzerland, like many other major economies has been suffering the brunt of poor inflation. Inflation mostly suffered a setback after the price floor between the Euro and the Franc was removed. The SVME PMI has also contracted, currently standing at 49.7, down from 50.7; while retail sales too are an issue at -0.8% y/y. Currently, inflation stands at -1.4 per cent.

SNBâ€™s inflation outlook improved in the short-run due to the positive exchange rates effects. For 2016 inflation is expected to rise slightly to minus 0.5 per cent, unchanged from the previous forecast. The 2017 inflation forecast has however been revised slightly downwards from 0.4 per cent to 0.3 per cent. The SNB expects inflation to overcome the 1.0% threshold in mid-2018.

GDP data released earlier this month showed growth stagnated in the third quarter (quarter on quarter), falling below 0.2 per cent market expectation. The central bank estimates real growth to be under 1 per cent in 2015. Growth is estimated to increase 1.5 per cent in 2016. The steading of global economy can be expected to increase foreign demand for Swiss goods and services. Domestic demand will also witness an improvement. The SNB said it will regularly monitor the mortgage and real estate markets and assess the need for an adjustment of the countercyclical capital buffer from time to time.

Read also other related articles about what 2016 could bring for the markets: