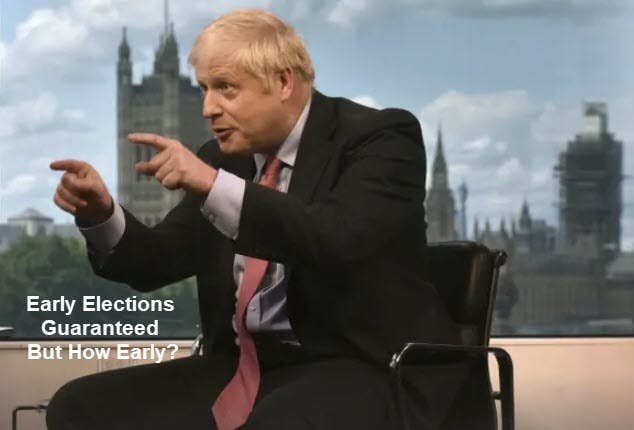 One of the above is guaranteed, but the timing is important.

1A: If Corbyn submits a motion of no confidence on July 25, and the motion succeeds, there will be time to hold elections and stop Brexit, if Corbyn wins.

1B: Recess starts at the end of the session on July 25. Corbyn's next chance for a motion of no confidence would be September 3. Starting September 4, there may not be enough time remaining to hold an election and undo Brexit. Johnson could run out the clock. I have September 10 as the absolute last chance. But if the election is on a Thursday, then September 3 is the mathematical last chance because October 31 is a Thursday.

2A: Johnson could immediately call for elections. If he does he would then campaign on a deliver Brexit platform.

2B: Johnson could wait until September 10 or later, ask for new elections, and run out the clock.

2C: Johnson could wait until after October then call for new elections, having delivered Brexit.

It is very hard to determine the odds. It would take a number of Tories willing to end their careers for a motion of no confidence to immediately succeed.

There are also a couple Labour Party members who would either abstain or vote against the motion. This too could end their careers, but one of them, a staunch Brexiteer has already proclaimed that is what she would do as sh is retiring anyway.

I suspect 2B or 2C is most likely and 1B the least likely.

If Corbyn has the votes, he will opt for 1A. If not, 1B would likely not be in time to stop Brexit which is why I have that as the least likely scenario.

Let's assume, perhaps incorrectly, that Corbyn does not have the votes for a motion of no confidence to succeed.

Under that scenario, Johnson gets his choice of Immediate (2A), before October 31 but with no time left to prevent Brexit (2B), and after October 31 (2C).

What should Johnson choose?

Johnson will select the option he deems least risky. I believe that is 2B or 2C.

Eurointelligence opts for 2A.

The Times reported yesterday that the team around Boris Johnson is preparing for early elections. We think this is a plausible story, but it does not mean that elections will necessarily happen. Our sense is that a discussion is going on within the Johnson camp. The perception of those within the Johnson team who argue in favour of an early election is that they stand a good chance to win it while Jeremy Corbyn is still around. The article also mentions that the Conservatives were planning a recruitment drive next week to put their party on an election footing.

We have argued before that an immediate election would be the least risky of all options for Johnson. It is the only scenario in which he could conceivably win an election before having delivered Brexit. An election right after a no-deal Brexit could be potentially catastrophic. We would expect Johnson to fight on a Brexit-delivery theme, nailing the 31-October leaving date to his mast. We would agree with the Times' assertion that Labour in its current state is unlikely to do well at an election.

There were also more signs of a hardening approach to Brexit. Johnson appointed a no-deal advocate as senior adviser to his EU team. Daniel Moylan is a former aide to Johnson when he was mayor of London. Again, we would not overplay the significance of the appointment on its own, but it is consistent with a hardening of Johnson’s Brexit position. After Johnson’s clear rejection of Theresa May’s withdrawal agreement, we see few obstacles now to a no-deal Brexit in October. However, Johnson may find it expedient to call elections beforehand to avoid an open confrontation with the House of Commons.

We also found it interesting to read an article in Buzzfeed about the disarray of the second-referendum campaign. Their most senior staff are divided over whether the should keep neutral, or whether they should openly back Remain. We think this is a storm in a very small teacup. Everybody knows that the second-referendum campaign is a Remain project. This is about tactics - a battle based on different perceptions of the gullibility of voters. Those who argue in favour of neutrality say this would increase the chances of success for their campaign, and the early-election chances of parliamentary candidates supporting a second referendum. We have argued consistently that a second referendum is unlikely to happen, except in a case of a Labour-led government. Even in that case, we would expect voters to endorse Brexit again.

If people would choose Brexit again, why would having an election following delivery be catastrophic when the need for a Brexit Party vanishes?

Point two is the case for immediate elections. But it also seems to work for 2B and possibly even 2C.

The Labour party is even more splintered than the Tories as long as Johnson delivers Brexit.

Corbyn's wishy-washy reversals of simultaneously supporting Brexit while calling for a referendum while really wanting a customs union (the worst possible option), have severely damaged Labour.

In addition, Corbyn is reeling for charges of antisemitism if not worse.

I do not know, but I expect that to happen. Corbyn might also resign first.

Whether he goes quietly or kicking and screaming might make a difference.

He is 70 years old and has an excuse of retiring if he chooses. 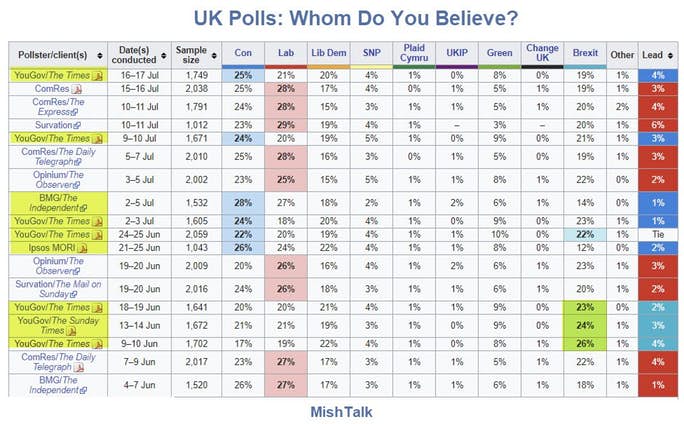 This of course implies Johnson has a choice. He will not have a choice in the event of 1A: Corbyn submits a motion of no confidence on July 25, and the motion succeeds.

Once again, let's assume Johnson has a choice.

It is not at all clear what his best option might be, at least according to the polls. That's more supporting evidence that Eurointelligence is going out on a limb.

Finally, although Johnson wants to run against Corbyn, not somebody else, that may not be Johnson's choice either.

What if Labour chooses to dump Corbyn the moment Johnson calls elections?

All things considered, the best policy choice (least risky) for Johnson is to postpone the choice until it is certain that Brexit is delivered, but no longer.

If my analysis is correct, that implies a mid-September or later call for elections, but no later than the end of this year.