A strong economy, booming jobs market, and elevated inflation argue for another "forceful" 50bp hike on 1 June. And the Bank of Canada is unlikely to stop there, with a red hot housing market and support from rising commodity prices suggesting it may be even more aggressive than the Fed this year. We expect CAD to benefit from BoC tightening in the medium term.

Another 50bp from the BoC

The Bank of Canada looks set to raise the policy rate a further 50bp on Wednesday as officials become increasingly anxious about high inflation spiralling out of control. Annual CPI is already up at 6.8%, the highest rate since January 1991, while the labour market has more than fully recovered all of the jobs lost during the pandemic. With job vacancies now exceeding one million, there is clear concern that wage rates will rise even more rapidly, with the Canadian Federation for Independent Business reporting a median expectation for pay rises of 3.5% over the next 12 months. Some 35% of respondents thought it would exceed 5% in an economy that is expected to grow 4% this year, all of which runs the risk of inflation staying higher for longer. 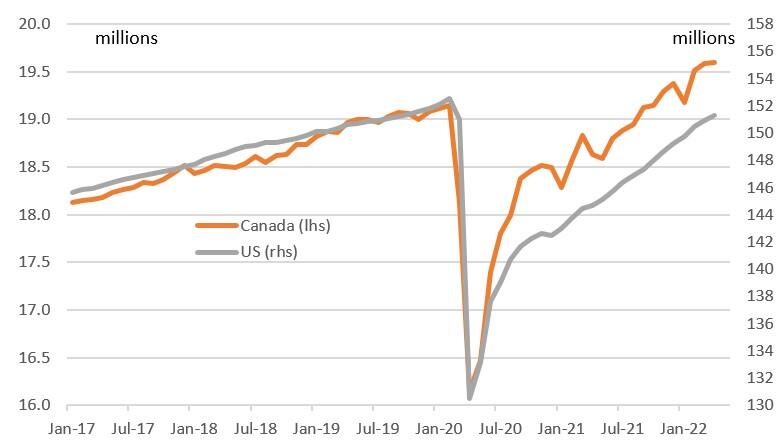 In response, the Bank of Canada's commentary is becoming more robust. Deputy Governor Toni Gravelle warned this week that inflation has been “higher and more tenacious” than expected and the Bank is “committed” to bringing it down to target. Moreover, “our policy rate, at 1%, is too stimulative” and the bank is “prepared to be as forceful as needed” to get inflation to 2% and that involves getting to the neutral range for rates at 2-3% “quickly”.

This followed comments from Senior Deputy Governor Carolyn Rogers who also pointed to the need to get interest rates higher quickly “with the Canadian economy starting to overheat”. With BoC Governor Tiff Macklem having told us back in April that the Bank will no doubt be “considering taking another 50bp step”, it is unsurprising that the market is fully backing such a move on 1 June, given the latest raft of data. We would argue that you cannot dismiss the possibility of a 75bp hike given the current macro environment. 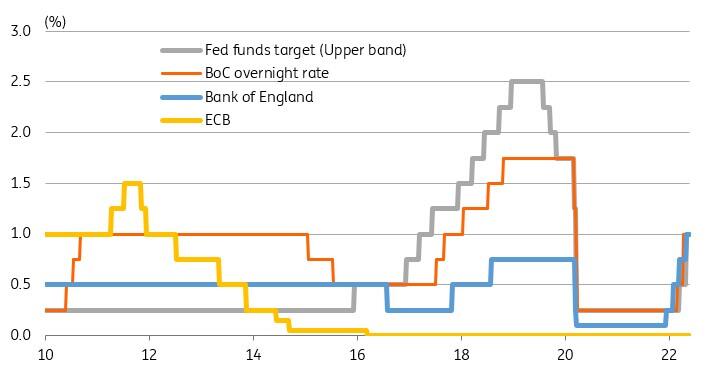 More rate hikes to come with policy "too stimulative"

We don’t think the 50bp moves will stop next week. Canada’s economy is being boosted by rising commodity output in response to the global surge in prices in everything from oil to aluminium to wheat. At the same time, the housing market is even hotter than that of the US with the average home price nine times the average household income versus a “mere” 5.5 times income in the US.

Mortgage rates have not risen as rapidly in Canada as they have in the US due to the typical mortgage being a five-year mortgage amortised over 25 years. This rate is more determined by what happens to short-term borrowing costs rather than big swings at the long end of the yield curve, as for the typical 30Y fixed-rate US mortgage. To generate the same degree of monetary tightening, the Bank of Canada tends to need to be more aggressive on policy rate increases.

BoC set to 'out hike' the Fed

Consequently, we see greater upside for BoC rates than for the Fed funds rate in the US, with the Bank of Canada set to hike to 3.5% in early 2023, above the 2-3% “neutral range” highlighted by some BoC officials. Nonetheless, as in the US, the harder and faster you go to try and get a grip on inflation, the greater the chance of an adverse reaction in the economy. We wouldn’t be surprised to see the BoC having to consider reversing course in late 2023.

CAD: BoC to remain a bullish factor in the medium-term

Markets are fully pricing in a 50bp rate hike, and attaching a 25-30% implied probability to a 75bp increase. Looking further down the CAD swap curve, however, market pricing does not look excessively aggressive on the hawkish side, as the expected year-end rate is around 2.68% at the moment.

We think the chances that the BoC will hike rates to 3.0% before the end of 2022 are quite elevated, which suggests that – unlike elsewhere in the G10 such as the eurozone or UK – there is some sizeable room for further hawkish re-pricing in rate expectations in Canada. Ultimately, this factor – along with the rate advantage itself – is a bullish argument for the loonie in the medium run, and we continue to see BoC tightening as a contributing factor to pushing USD/CAD below 1.25 in the second half of the year.

Looking at the shorter term, we think only a 75bp hike next week will be able to materially lift the loonie, considering a 50bp move is fully priced in. That said, a scenario where the BoC hikes by 50bp but delivers hawkish hints on more 50bp increases and on the terminal rate should be enough to put a floor under CAD next week.

At the current juncture, USD/CAD dynamics remain strictly tied to swings in global risk sentiment. We’ll likely need to wait for a sustained stabilisation in sentiment before we can see USD/CAD re-align with its fundamentals (rates, commodities, and growth stories), which point to a stronger CAD. With market instability possibly extending into the summer, USD/CAD may stay close to the 1.27-1.28 area, gearing up for a break lower in the latter part of the year.

Read the original analysis: Bank of Canada set for another 50bp hike