Bulls regained traction after stalling on approach to these barriers, with subsequent shallow pullback so far seen as better buying opportunity.

Strong Australia’s Q3 inflation data (core CPI jumps to six-year high at 2.1% vs 1.8% f/c, while monthly and annualized inflation numbers came in line with expectations, 0.8% and 3% respectively) boost expectations for

RBA’s earlier than expected rate hike, as the central bank was behind the curve on inflation and would be pushed to start tightening earlier, probably in July 2022.

Daily studies are in bullish setup but losing positive momentum that warns of extended consolidation before bulls resume.

Firmly bullish weekly techs and signs that the Aussie is on track for a monthly rise of 4% vs its US counterpart (the biggest monthly advance since December 2020) adds to positive signals.

Rising daily Tenkan-sen, which tracks the action since Oct 1, offers solid support at 0.7462. 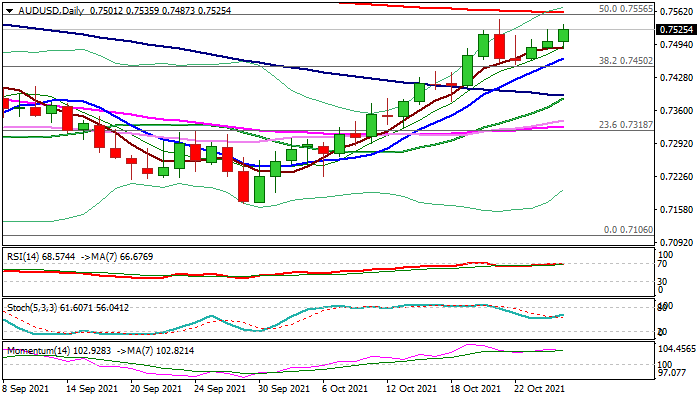 Interested in AUD/USD technicals? Check out the key levels