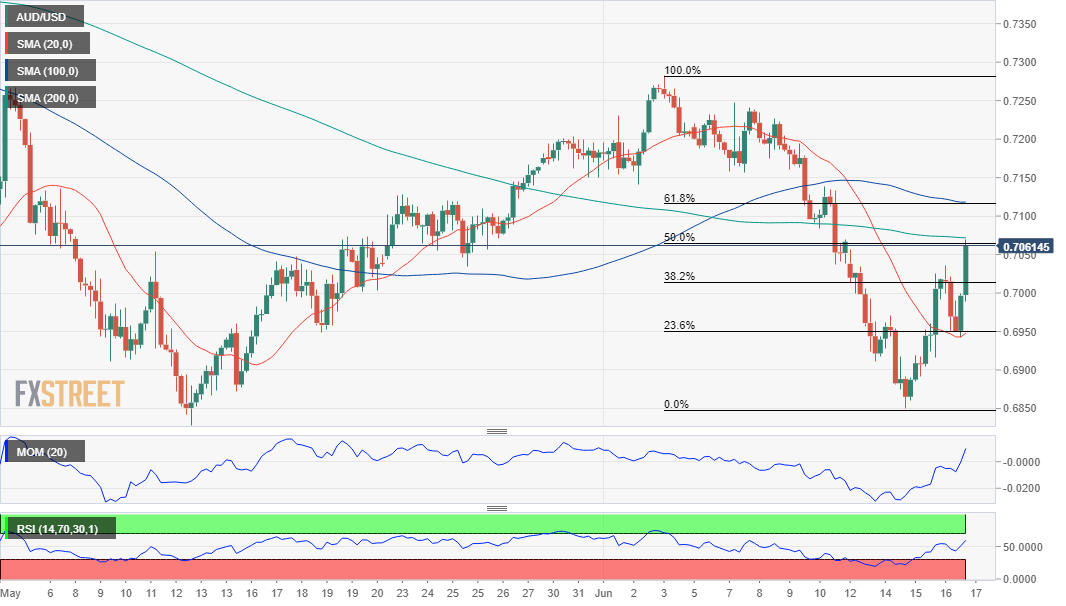 The AUD/USD pair trades around 0.7060, up for a second consecutive day. The aussie was able to reject the brunts of risk aversion on the back of much better than anticipated local data. The broad greenback’s weakness also helped AUD/USD to extend gains to a fresh weekly high of 0.7068, despite the poor performance of global indexes.

Australia published its monthly employment report at the beginning of the day, which showed that the country added 60.6K in May, more than doubling the expected 25K. The report also showed that 8.7K part-time jobs were lost, while new full-time ones reached 69.4K. The Unemployment Rate held at 3.9%, while the Participation Rate surged to 66.7%.

The country also published the Melbourne Institute report on Consumer Inflation Expectations, which increased to 6.7% in June from 5% in the previous month. The Australian macroeconomic calendar will remain empty on Friday.

The AUD/USD pair has corrected 50% of its latest daily slide measured between 0.7282 and 0.6850. The daily chart shows that the 20 SMA heads nowhere around the 61.8% retracement of the same decline at 0.7116, while technical indicators maintain modest bullish slopes within negative levels. Bulls will be much more confident if the pair extends its gains above the aforementioned Fibonacci resistance.

The 4-hour chart hints at further gains ahead, as technical indicators head firmly higher well into positive territory, while the 20 SMA turned marginally higher far below the current level. The 200 SMA stands directionless a few pips above the current level, while the 100 SMA reinforces the resistance area around 0.7115.