Skip to main content
TRENDING: EURUSD| GBPUSD| AUDUSD| USDCAD| XAUUSD
TRENDING: EURUSD| GBPUSD| AUDUSD| USDCAD| XAUUSD
;
Tomorrow is our Independence Day, but the fireworks might actually start on the opposite side of the Atlantic, when Mario Draghi, the President of the European Central Bank, announces the results of the latest round of rate deliberations and pontificates on his innermost thoughts. The valuation of the Euro will literally hang on his every word, facial expression, and degree of confidence, even if feigned for public consumption.

The acknowledged mission of every central banker is to maintain stability of prices, but a corollary might easily be stated as do whatever it takes to thwart currency speculators. Every forex expert and major hedge fund manager has declared the Euro to be over-valued, yet Draghi, a true financial magician in his own right, has done everything in his power to levitate the Euro above expectations. The masses, however, are not applauding. A strong Euro is a holdover of austerity measures in the region, which by all accounts have not worked to restore economic health and end the continuing crisis.

It was nearly a year ago when Draghi pledged “to do whatever it takes to preserve the Euro.” In hindsight, he may have been speaking to the broader issue of the European Economic Union, but markets interpreted it to mean that the Euro would remain strong. And it did, buffeting all attempts to drop it down to parity with the Dollar, as many analysts have suggested over time. From a technical perspective, however, all signs point in the southerly direction, as the chart below illustrates: 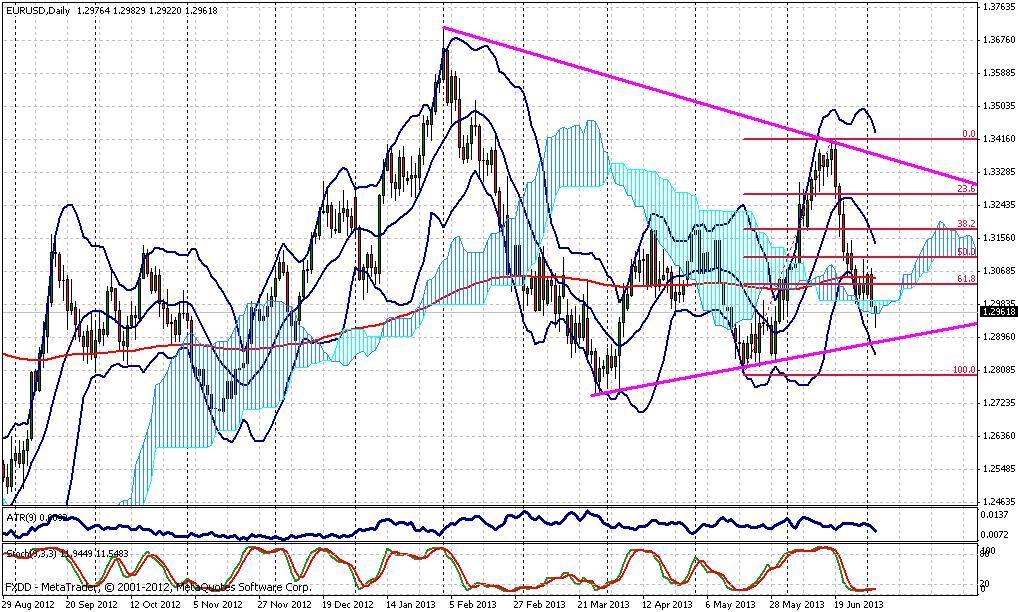 Since Draghi’s remarks last July, the Euro has displayed a textbook “Head-and-Shoulders” formation, a signal that a potential drop below $1.20 was imminent. Shorting the Euro was back in fashion again, but wait, Mario the Magician had something to say about that possibility. He quickly recanted from any rumors of a negative savings rate and spoke optimistically about economic growth in Europe, even if it was way out in 2014. The expected breakout never happened, but a new shoulder has formed.

The looming Triangle formation, however, is more indicative of current expectations. The Euro has descended from its upper border, as the market focuses on tomorrow’s press briefing from Draghi. A more accommodative posture is in the wind. The general consensus has changed. Government officials want a weaker Euro. Austerity measures are no longer in vogue.

The Euro has fallen recently from its long-held position of $1.30, dropping below its 100-Day EMA, the foreboding Kumo Cloud, and the key Fibonacci level of 61.8%, all signs of weakness. The question of the day is how much further will the Euro weaken? It could bounce off the lower border of the Triangle or continue downward.

All eyes will be on Mario Draghi, once again. Will he cave in to public pressure and signal a swift decline in the Euro’s value? Swift is not a word in a central banker’s lexicon. They prefer smooth and gradual. They also would love to have a return of the Bretton-Woods agreement where foreign exchange rates were fixed daily within acceptable limits. If Draghi is to capitulate, it will be done gradually.

From a fundamental perspective, Europe is not out of crisis mode, as many government officials would have us believe. Things are not going well in Portugal. Vitor Gaspar, the Finance Minister, quit on Monday, and Foreign Minister Paulo Portas, head of the junior member of the governing coalition, resigned his post on Tuesday. Greece is still a problem, and liquidity measure established in 2012 will soon be tested.